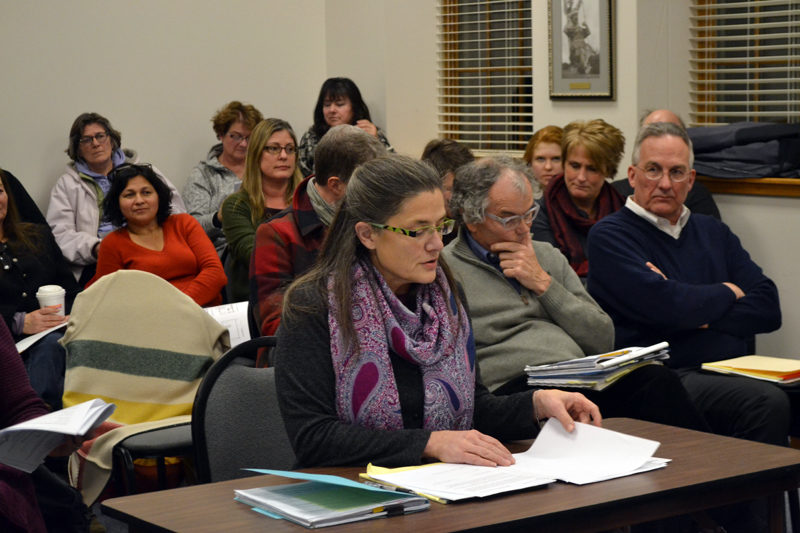 Stepping Stone Housing Inc. Executive Director Marilee Harris updated the Damariscotta Planning Board on Monday, Feb. 6 about the nonprofit’s progress toward completion of four items the board had requested before it votes on Stepping Stone’s application for the development of the Blue Haven property. Harris also provided an application the nonprofit will use to screen potential tenants.

The planning board found Stepping Stone’s application for further development of the former Blue Haven property to be complete during a meeting Dec. 5, but asked the nonprofit to provide additional information before the board decided whether to approve the project.

The board asked Stepping Stone to provide a landscape plan for the property, including the size and location of any signs, and to obtain a permit for the signs. The nonprofit was also asked to meet with a soil and water conservationist and provide a plan for stormwater management and erosion control.

Harris had also agreed to provide a budget to demonstrate Stepping Stone’s financial capacity to complete the project. The nonprofit plans to build five new units of approximately 700 square feet each on its property at the corner of Hodgdon and Pleasant streets. A small, existing cottage on the property would remain, while other structures would be removed.

Harris provided an email from Jeff Dennis, a biologist with the Maine Department of Environmental Protection, to the board during its Feb. 6 meeting.

In his Jan. 20 email to Town Planner Tony Dater, Dennis concluded that it is likely there will be less runoff leaving the site during storm events after Stepping Stone completes its redevelopment of the property.

Currently, there is an estimated 11,500 square feet of impervious surface – surfaces such as asphalt that do not absorb stormwater – on the property, which would be reduced to slightly less than 10,000 square feet after Stepping Stone completes its redevelopment, Dennis wrote.

Dennis said it is “reasonable to conclude” that the stormwater runoff volumes and peak stormwater discharges “would be no greater after the redevelopment of the site than before, and may in fact be less.”

Stepping Stone will provide the other items the board requested during the board’s March meeting, Harris said.

Harris also provided the board with the application the nonprofit will use to screen potential tenants. During previous planning board meetings, neighbors to the property have expressed concern about the screening process.

The application includes two background checks, one of which would be completed by the Damariscotta Police Department. It also asks for proof of income and references.

Potential tenants will be required to sign a form agreeing to Stepping Stone’s mission. According to the agreement, the Stepping Stone selection process “considers only those who have the capability and energy to work with us to gain a better way of life.”

Shari Sage, another member of the planning board, said she “had an issue” with the agreement, as it sounded as if Stepping Stone was trying to “force the applicant to walk in Stepping Stone’s path.”

The agreement also drew criticism from neighbors to the property after Debra Lucchesi, a tenant of the Stepping Stone property, said she was asked to leave after she refused to sign the agreement.

Damariscotta Planning Board Chairman Jonathan Eaton said Stepping Stone’s screening of tenants is not part of the planning board’s review.

Harris said Stepping Stone would display additional information about the project at its annual tennis tournament fundraiser at the CLC YMCA on Saturday, Feb. 11. The tournament is the nonprofit’s largest fundraiser of the year, and all donations and sponsorships will be matched by an anonymous donor.

Stepping Stone will appear at the planning board’s next meeting, Monday, March 6.