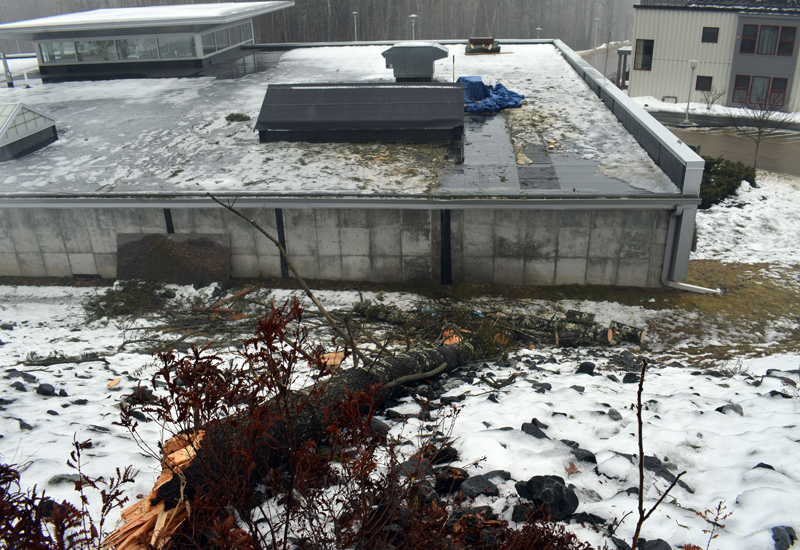 The classroom side of the Cable-Burns Applied Technology and Engineering Center at Lincoln Academy in Newcastle, where a tree shattered a skylight and sheared off two sprinkler heads, causing flooding and water damage. The tree fell during heavy wind and rain the evening of Friday, Feb. 7. (Evan Houk photo)

The Cable-Burns Applied Technology and Engineering Center at Lincoln Academy in Newcastle sustained heavy water damage after a tree fell onto the building during stormy weather Friday, Feb. 7.

The 10,300-square-foot, multimillion-dollar building, which opened in 2015, houses programs in science, technology, engineering, mathematics, and the arts.

Lincoln Academy spokesperson Jenny Mayher said the tree hit a skylight in a design studio and sheared off two sprinkler heads, causing the classroom side of the building to flood with 8 inches of water.

As of Tuesday, Feb. 11, maintenance crews had sealed off the skylight and drained most of the water from three classrooms, bathrooms, and the lobby. ServPro Restoration Services was working at the building as well.

Mayher said the classes normally held in the technology center will move elsewhere until repairs are made. She said this should not affect the functionality of the classes.

Mayher said the hands-on side of the building, which includes automotive repair bays and wood and metal shops, did not sustain any damage and should reopen for classes soon after the week of February vacation, which starts Feb. 15.

She does not expect the classroom side of the building to be open until the middle of the third trimester, in April.

The water destroyed approximately 20 computer workstations in the design studio, but Mayher said a lot of electronic equipment, including video equipment, was saved.

The fire department was dispatched at 6:28 p.m. Friday.

Deputy Fire Chief Casey Stevens said the department had the water flow to the damaged sprinklers shut off in less than 30 minutes. Firefighters then removed the portion of the tree that landed on the skylight.

Stevens said the tree created a significant hole, so crews secured a tarp over the open area.