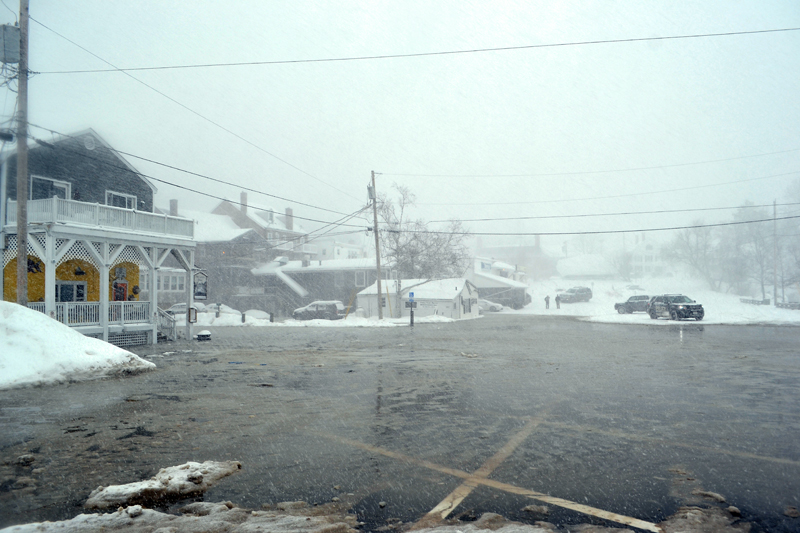 Storm surge during the blizzard Thursday, Jan. 4 contributed to the flooding of the municipal parking lot in downtown Damariscotta, as well as businesses in Boothbay Harbor and South Bristol.

“We had some places in the county that were really affected by flooding during the blizzard, but thankfully the storm wasn’t as bad as originally forecast,” Lincoln County Emergency Management Agency Director Casey Stevens said.

The county “didn’t really receive any” requests for assistance from residents during the storm, which Stevens credits to preparedness.

“When you’re looking at this storm compared to the wind in October, there wasn’t really any damage or power lines and trees that came down,” Stevens said. “In a way I’m almost thankful for the forecast being what it was, because a lot of people got prepared. If the track of the storm was any different, this could have been a whole different scenario.”

Blizzard conditions and storm surge resulted in flooding in several towns, however.

“The water had risen to a point where it was coming into the lot at an alarming rate,” Warlick said. “It was physically higher than the elevation of the parking lot, and was coming up the boat ramp, over (Riverside Park), and in from Misery Gulch.”

Some of the buildings on Main Street with entrances in the parking lot saw water damage, Warlick said.

The Great Salt Bay Sanitary District was already in the parking lot when the flooding began. The Damariscotta Fire Department and Hagar Enterprises Inc. responded to the lot to help move the water away from buildings.

“The unfortunate part is, when you start talking about an astronomically high tide while there’s a blizzard going on, we had to wait until the water level diminished a bit,” Warlick said. “It was a hurry-up-and-wait game.”

Warlick estimated there was a foot of standing water in the parking lot, with 16 inches of water at the deepest point. 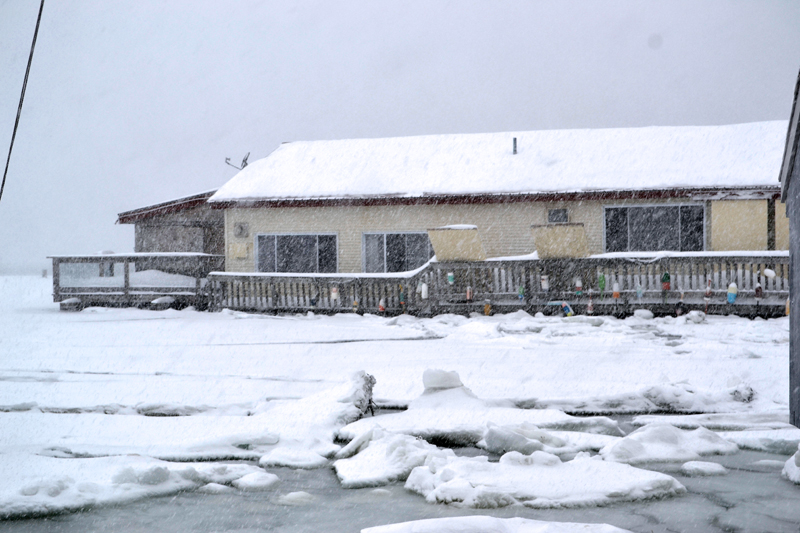 Shortly after high tide at Schooner Landing in Damariscotta during the blizzard the afternoon of Thursday, Jan. 4. (Maia Zewert photo)

“It was substantial enough to where it started flowing over the bumper of a four-door sedan,” Warlick said.

Down in South Bristol, Osier’s Wharf had “about 4 inches of water rush into the store” at high tide, owner David Osier said.

“It would come in during high tide and then go right back out again,” Osier said. “The next time high tide came around, the same thing happened again.”

Osier closed the store at 2 p.m. Thursday due to the continuing storm. He said the store did not lose any food or products, as employees moved items off low shelves.

“It really could have been a lot worse,” Osier said. “I’ve been here 20 years and never had it come in the store. I saw it come up to the back steps, but nothing like this.”

The blizzard also caused power outages in parts of the county. Central Maine Power Co. had 3,486 customers without power in Lincoln County as of 4:57 p.m. Thursday, giving it more outages than the rest of the state combined. The state had 4,754 outages at the time.

The blizzard warning remained in effect until 4 a.m. Friday, according to the National Weather Service.