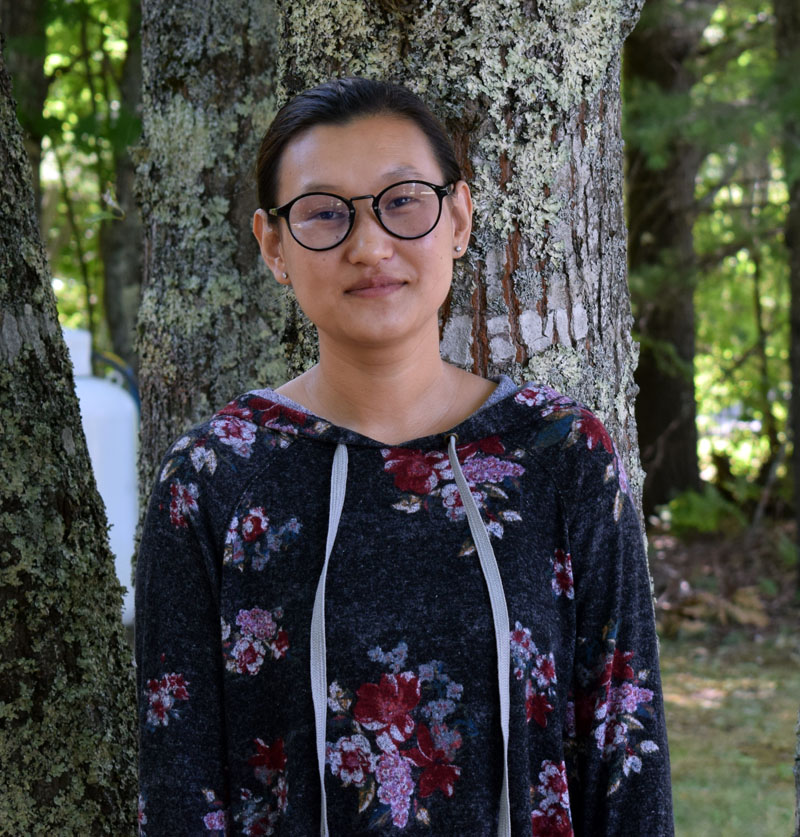 Choden is from Bhutan, an Asian kingdom bordered by Tibet and India. She was attending The University of Bridgeport on a scholarship, but the school revoked the scholarship due to financial issues.

The Connecticut university is being absorbed by three other institutions — two private, nonprofit universities, Goodwin University and Sacred Heart University, and the for-profit Paier College of Art. Choden will graduate in December.

The GoFundMe page, at tinyurl.com/y38mjdye, aims to cover Choden’s school and living expenses, as well as cover loans her mother had to take out. As of Tuesday, Sept. 8, $4,810 of the $30,000 goal has been raised.

LCTV is also awarding scholarships in the amount of $2,000 each to Choden and Tyler Davis, an intern at the station.

Choden’s mother, Pem, mortgaged their family farm in Bhutan so Choden could complete her master’s degree in global media and communication studies. Her family is facing economic hardship because of an accident in which Pem was severely burned.

Unable to live at her college because of COVID-19 restrictions, Choden has been living with Julia Lane in Round Pond and volunteering at LCTV since July, she said in an interview Aug. 13.

She met Lane and her husband, Fred Gosbee, while returning to school on a train from New York in January 2019. After Lane struck up a conversation, they exchanged contact information. Lane and Gosbee are known locally as the musical duo Castlebay.

After receiving her bachelor’s degree in English from the Royal Thimphu College in Bhutan, Choden moved to the U.S. to further her education at The University of Bridgeport because of the generous scholarship she received.

She said that in Bhutan, the U.S. is seen as a place to gain practical knowledge and experience in any professional field.

“Like a huge meal served on a silver platter, that’s the United States for us, because our country’s very small by the size and also with economic development,” Choden said.

Choden’s thesis focuses on the underrepresentation of minority populations in the media in India.

Her dream is to become a war correspondent, inspired by Marie Colvin, who reported for the British newspaper The Sunday Times from 1985 until her 2012 death while covering the siege of Homs, Syria.

“I want to write stories about how, because of some stupid political powers clashing, so many innocent people are dying. And nobody talks about them, which is really sad,” Choden said.

“I picked it up from movies,” Choden said of learning to speak different languages.

At LCTV, she is learning about video production and editing, as well as shooting video in the field.

“With video, you can tell different stories and keep it for the generations to come. It’s a powerful medium that everyone looks back on,” she said, noting that everyone watches television.

She is also applying her skills in social media, attempting to create more buzz for the Newcastle public-access station.

“People living here are really interested in the ongoing programs on Facebook. So we’ve been trying to post these programs not only on the television side,” she said.

Choden previously volunteered as a communications and marketing officer at the Lions Club International Charter in New York City and completed a digital media internship in the athletics department at The University of Bridgeport.

“I took lots of photos and videos. I made videos for them and I was looking after their Facebook and Instagram page,” Choden said.

She also did social media work as an assistant program officer at the Bhutan Center for Media and Democracy in Thimphu, Bhutan.

“So  even Larry can do it,” Choden said as she and LCTV President Larry Sidelinger laughed.

She said the LCTV Facebook page has had 10,000 engagements in the previous two weeks.

Choden has also been helping to develop a youth program at LCTV.

“We’re going to bring in young people, especially high school students, and also young people below the age of 25, and talk about what they think of Maine and why young voices matter in Maine,” she said.

She said there were definite instances of culture shock when she arrived, but she has grown to like life in the U.S., especially in Maine.

Growing up in a Buddhist country, she had never eaten meat until she came to the U.S., because eating vegetarian is expensive and hard to do here.

“There are a few salads, but back in our home, salad is not a meal, it’s just a snack, and it doesn’t fill your stomach,” Choden said.

She was not used to the openness in conversation in the U.S.

“People here are so open to suggestions, so open-minded. And it’s easy to approach and talk to (people) with your ideas,” she said.

She said she faced discrimination in Bridgeport because of her Asian descent, especially after COVID-19 hit the states.

“Other than that, I feel that the United States is amazing,” she said.

In her spare time, Choden enjoys spending time outdoors, hiking, going to the ocean, and learning to swim. She recently visited a wild blueberry farm in Rockport and enjoyed picking blueberries there.

“I love blueberries. Even for ice cream, I eat blueberries,” she said with a laugh.

She also loves the people in Maine.

“The best part is people here are very kind. I never expected that I would meet so many good people,” Choden said.