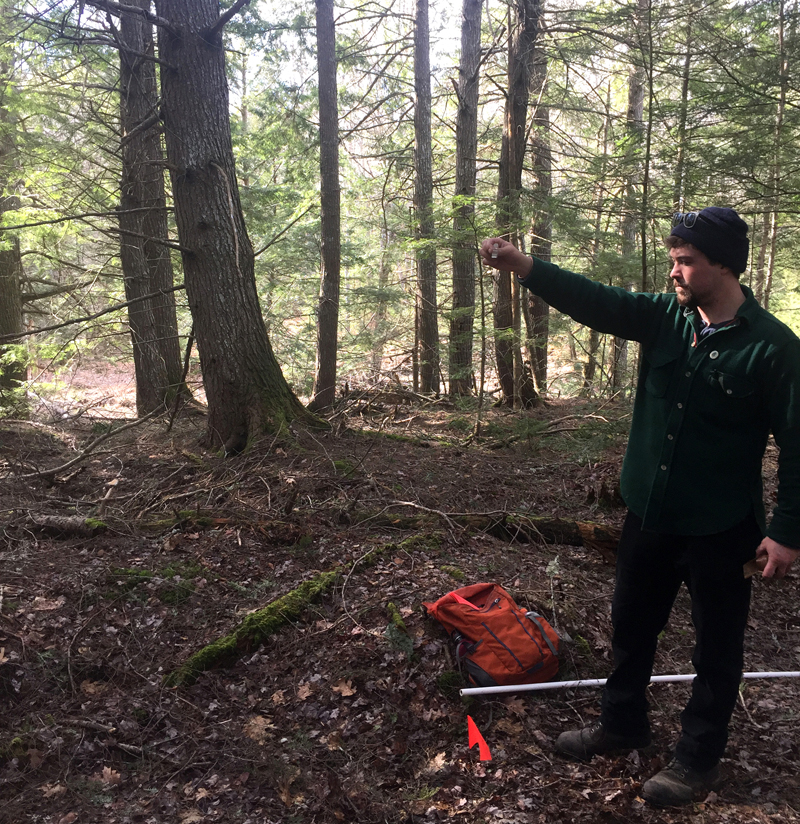 Noah Begin, of Damariscotta, uses a 10-BAF prism to determine which trees to measure over a plot center, indicated by an orange flag. Begin is pursuing a master’s degree in forestry from the University of Maine. (Photo courtesy Jenny Begin)

University of Maine forestry graduate student Noah Begin, of Damariscotta, has come full circle. Born in a former church in Damariscotta Mills, Nobleboro, Begin grew up in Damariscotta. He attended camps and classes through the Damariscotta River Association, now Coastal Rivers Conservation Trust. He hiked at Dodge Point and DRA properties up and down the peninsula.

“I was definitely exposed to a lot of my outdoor education through DRA. Forestry was not something I thought about before I went to UMaine. I had not considered it. I met some people in forestry and that is when I got into natural resources,” Begin said.

When it came time to do his forestry master’s project, Begin naturally gravitated toward doing something in his own backyard and instantly thought of Steve Hufnagel, executive director of Coastal Rivers Conservation Trust.

Begin knew Hufnagel from his younger years at DRA, and they lived in the same neighborhood. “I had that kind of personal connection. I needed a big project for my master’s degree and thought it would be nice to do a property that was not a university property, but had more of a community and wildlife habitat component to it, that was more complex,” Begin said.

Begin recently completed a forest inventory on the Castner Creek Community Forest property in Damariscotta, just a stone’s throw from where he grew up. He is now writing a stewardship plan as part of his master’s studies at UMaine.

The Castner Creek property stretches from Heater Road on the west to School Street on the east and borders Piper Mill Road. The property was part of the 260-acre Piper Commons lot that included land where the new Camden National Bank is on Main Street.

Noah Begin stands next to a 3-foot-diameter pine tree on the Castner Creek property in Damariscotta. (Photo courtesy Jenny Begin)

Initially the plan was for Begin to come up with a forestry management plan to selectively cut on the property.

“The land was harvested about 20 years ago and 80 years ago. There are still some beautiful trees (old growth), white pine and hemlock along the creek,” Begin said.

The property has some old stone walls and a dam, which was once the site of a mill.

“The land is all pretty wet, with pretty fragile soils. There are a lot of hemlock and shade-tolerant species. There are areas of oak and white pine on areas of higher land,” Begin said.

A snowmobile trail crosses the property, running “up around the boundary on the south side. It is pretty wide and easy to walk on,” Begin said.

Coastal Rivers plans to have a hiking trail on the property within the next couple of years, using the existing snowmobile trail as the main trail, with a few spur trails down to Castner Creek. Parking has to be addressed before the property can be opened to hikers.

Hufnagel “has noticed more people out on the trails, and he is looking to spread out the use,” Begin said of opening more hiking trails close to town.

“We plan to create some trails on sections of the property over the next several years, to manage it for wildlife habitat improvement, and are looking at how we might be able to offer firewood to local community programs. We’re still examining which access point will be best for a small parking area,” Hufnagel said.

“They are looking into some light harvesting of trees to make a path,” Begin said.

Coastal Rivers’ focus is on improving the water quality of Castner Creek, which has a lot of sediment in it. Plans call for limiting foot traffic in the highly sensitive area along the creek.

Begin has plotted 50 points on the property and flagged them using a smartphone app. He used a 10-BAF prism to check which trees to measure, then recorded their age and height. This organized approach will allow someone five to 10 years down the road to go out and survey the exact same plot to check on the site’s productivity.

“By establishing fixed reference points throughout the property, and analyzing carbon storage in the forest, we’ll be able to see changes over time and consider how we’re helping to pull carbon out of the atmosphere,” Hufnagel said. “His work will also inform management of the forest, as well as trail location.”

“It has been wonderful to work with Steven on a property that is pretty close to home. My mother has been my field assistant. It has been great. It has been fun for both of us to get out there,” Begin said. His mother is Jennifer Begin.

Begin started his master’s project almost a year ago, shortly after the Castner Creek property was purchased by the DRA.

“My deadline for finishing is early May. It started out that I would be writing timber conscriptions and a timber harvesting plan. Now it is more of a stewardship plan, with details and lots of pictures. I am going to do a flyover with a drone to get some nice video of the creek,” Begin said.

“It is a jumping off point for them, to know what is on the property and have a good inventory. It will be a good resource to move forward with their stewardship plan,” Begin said.

Coastal Rivers is focusing on managing the property for wildlife.For example, Hufnagel wants to keep a beaver lodge on the creek a quiet place. Begin has spotted woodcock along the edge of a field.

“Damariscotta History” columnists Marjorie and Calvin Dodge, in a March 2019 column, described Castner Creek as having “a number of man-made rock and (earthen) dams on it.”

On a walk with Huston Dodge 21 years ago, they saw signs for rabbit and deer and spotted milk adders (snakes) sunning themselves on warm rocks.

The Dodges described an “old water-powered sawmill with an up-and-down saw powered by the flow of water as it passed by the bottom of the water wheel instead of flowing over the top of the wheel.”

The Dodges said a stone dam created a pond used by Reed’s Ice Co., which cut ice for homes and stores in the downtown area. According to their column, mink, weasel, muskrat, and beaver were trapped along the brook for their fur.

Begin “came through a number of Coastal Rivers environmental education programs, so it is especially exciting to now have the chance to work with him and benefit from his studies and expertise as a forestry graduate student – essentially the student becoming the teacher,” Hufnagel said.