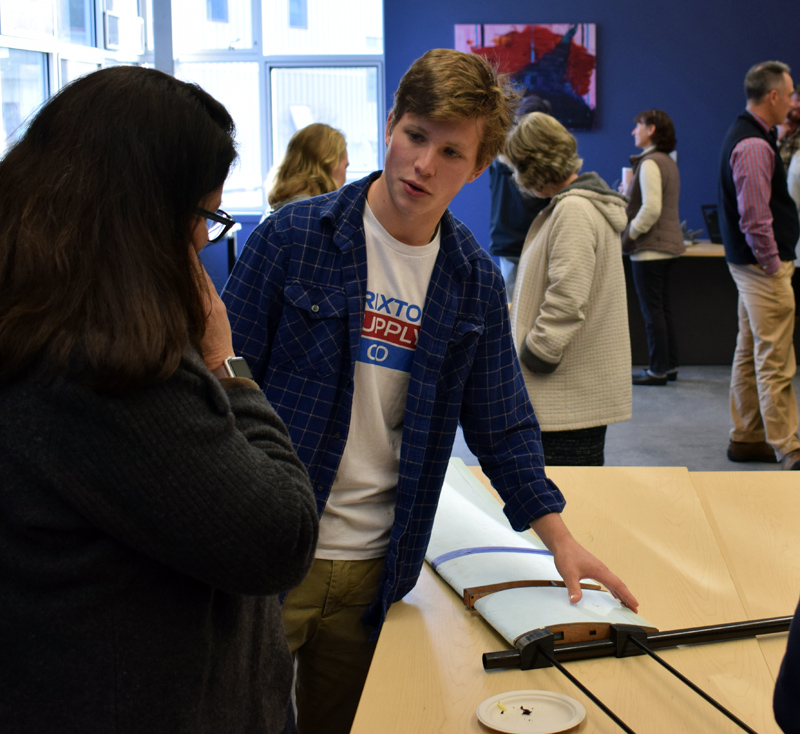 The event was held in the Cable-Burns Applied Technology and Engineering Center at Lincoln Academy from 2-4 p.m. and was open to the public. A handful of visitors dropped in to view the various projects and ask the students questions.

“It’s a show and tell, an exchange of ‘this is what we’ve done this semester at the college level and the high school level.’ So it’s a very casual way of cross-pollinating,” Lu-Shien Tan, director of admissions at LA, said.

The event was hosted by Ken Stevenson, head of the design, engineering and technology department at LA; Stephanie Cheney, academic technology coordinator at LA; and Heather Leslie, director of the Darling Marine Center.

Six LA students participated in the event with a variety of hands-on, independent projects on display.

Toby Seidel had one wing completed of his ultra-lightweight drone that he brought to the event. He plans to run the drone with battery power for remote ocean and river monitoring. The frame needs to be as lightweight as possible because the batteries will be the heaviest part of the drone, he said.

Jacob Pinkham hung out in the service bays of the building with his 1986 Ford pickup truck. Pinkham currently has the truck torn apart, as he is in the process of restoring the vehicle for his school project.

Other LA student projects involved creating marionettes for use in stop-motion animation, studying horseshoe crab exoskeletons to determine population growth, a welding demonstration with a fire poker, and a wood shop demonstration that used a computer numerical control router to cut headphone stands.

A computer numerical control, or CNC, router is a machine that cuts precisely through wood, metal, or plastic based on a computer design, Jenny Mayher, director of communications and community engagement at LA, said by email. She said it can cut material as big as 4 feet by 8 feet.

Seven students currently enrolled in the Semester By the Sea at the Darling Marine Center attended the event to share their research projects.

Among the collegiate projects were studies of plankton communities in the Damariscotta River estuary, tropical reef ecosystems, bee decision-making and ecology, the correlation between body measurements of sharks and overfishing, shellfish aquaculture, shark attacks, and culling the invasive lionfish in tropical Curacao.

Alissa Johnson explained how she is collecting data from shark mouths, attempting to find a connection between mouth size and body measurements.

Robert Cuddy used a large green honeycomb model to illustrate his research. Cuddy placed three artificial flowers with different patterns outside a beehive to study which pattern the bees preferred to pollinate.

Caroline Cunningham talked about her experiences hunting for the invasive lionfish species, filleting them, carefully removing the poisonous quills and spikes, and eating them. She said this is the only way to thin the lionfish population, since no other predator will eat the fish because of the poison spikes on its exterior.

She said the lionfish is dangerous because it eats everything, disrupting any ecosystem it finds itself in. The fish is a problem off the coast of Florida.

The event set each student up at a different table with only a few documents, pictures, or props.

The limited visual aids forced curious onlookers to ask questions and engage with the students about their projects.

Leslie, of the Darling Marine Center, said the two entities have been working toward increased collaboration.

“We have a K-12 program that’s been in existence for over 20 years and we’re actually at a point where we’re thinking about new directions with that program, so these experiments are coming at a really good time. We have a history of working with Lincoln. It’d be great to figure out ways to work more deeply together,” Leslie said.