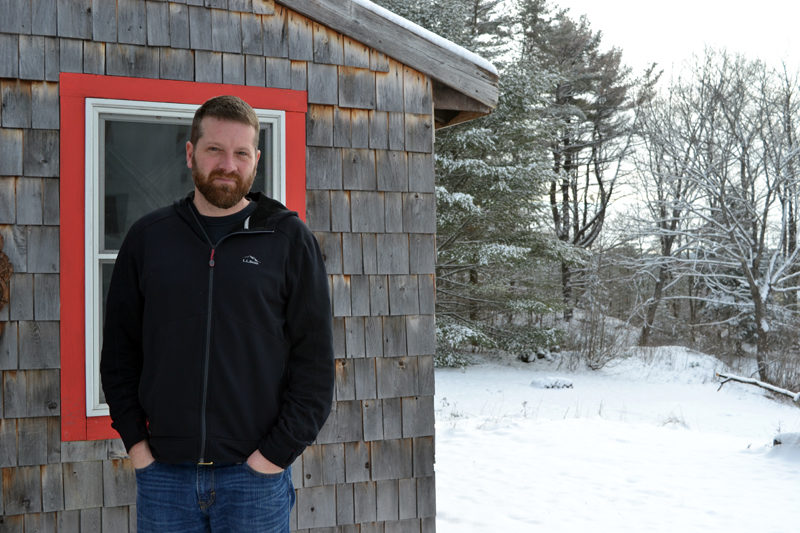 Filmmaker, composer, and musician Sumner McKane stands in front of his studio, located behind the Wiscasset home he shares with his wife and two children. (Christine LaPado-Breglia photo)

When Sumner McKane performs the live musical accompaniment to his most recent film, “The Northeast by Eastern,” at Damariscotta’s Lincoln Theater on Saturday, Jan. 28, it will be a milestone in the 40-year-old filmmaker, composer, and musician’s life.

“It’s been over 20 years since I played at Lincoln Theater,” the engaging McKane said in a recent interview at his Wiscasset studio. The last time he played his guitar at Lincoln Theater he was in a band with high school friends called Glass Onion.

McKane – who graduated from Lincoln Academy in Newcastle and from the University of Southern Maine with a bachelor’s degree in history – is fast making his mark in the world of historical documentary films. “The Northeast by Eastern” is a thoroughly captivating movie based on hundreds of postcard images taken from 1909 through the 1950s in rural New England – with a heavy emphasis on Maine – by Belfast-based Eastern Illustrating & Publishing Co.

“In all of Eastern’s images, life just looked more patient, more simple,” McKane said. Accordingly, his aim in the creation of “The Northeast by Eastern” was “to deliver a life more patient and simple” to viewers. 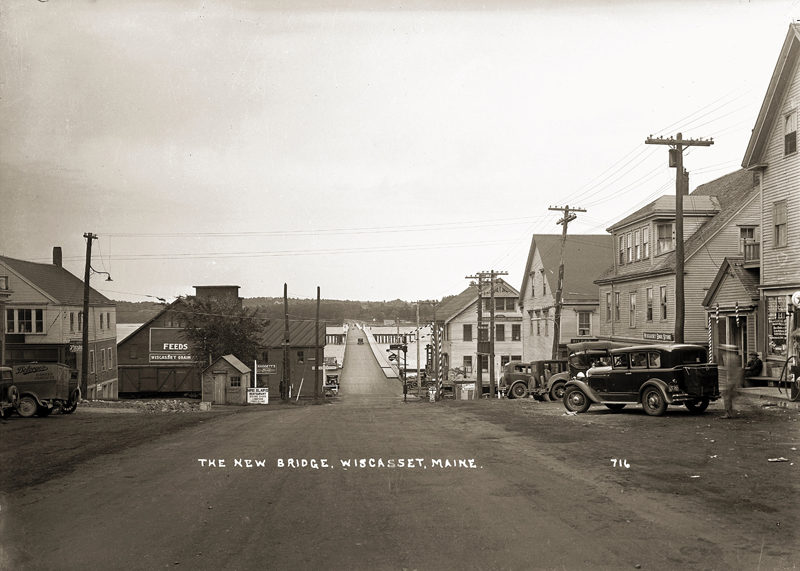 A still from Sumner McKane’s latest film, “The Northeast by Eastern,” which will be screened at Lincoln Theater at 2 p.m., Saturday, Jan. 28. (Image courtesy Sumner McKane)

He accomplished this by including recorded oral histories from the Maine Folklife Center in Orono and the Aroostook County Oral History Project, as well as interviews with such knowledgeable and interesting people as Kevin Johnson, the photo archivist at Penobscot Marine Museum in Searsport; Brewster Harding, the author of “Roadside New England, 1900-1955: A Photographic Postcard Record of the Eastern Illustrating & Publishing Company of Belfast, Maine”; and South Bristol Historical Society historian David Andrews.

W. H. Bunting, co-author of “Maine on Glass: The Early Twentieth Century in Glass Plate Photography,” is also interviewed. His account of a group of log drivers breaking into a fight on a train is one of numerous colorful moments McKane captures.

Bunting describes how the men were swinging their spike-soled caulk boots around and around their heads before whacking one another with them until their heads were bloody. “It wasn’t fighting for meanness. It was just fighting to fight,” Bunting said with a chuckle.

In one oral history included in the film, a Madawaska woman named Bernadette Mayhew talks of smuggling liquor from Canada into the U.S. during Prohibition, seemingly with the help of a U.S. customs officer whom she was dating at the time. Another tells the story of slop buckets spilling onto pies that would be sold to tourists.

“I was a little underwhelmed at the prospect of creating a film on postcards; I was concerned about my own ability to make it interesting and not a slideshow,” McKane said of his first response to being asked by Johnson to make a short film based on Eastern’s postcards for an exhibit at the museum last summer titled “Wish You Were Here.” 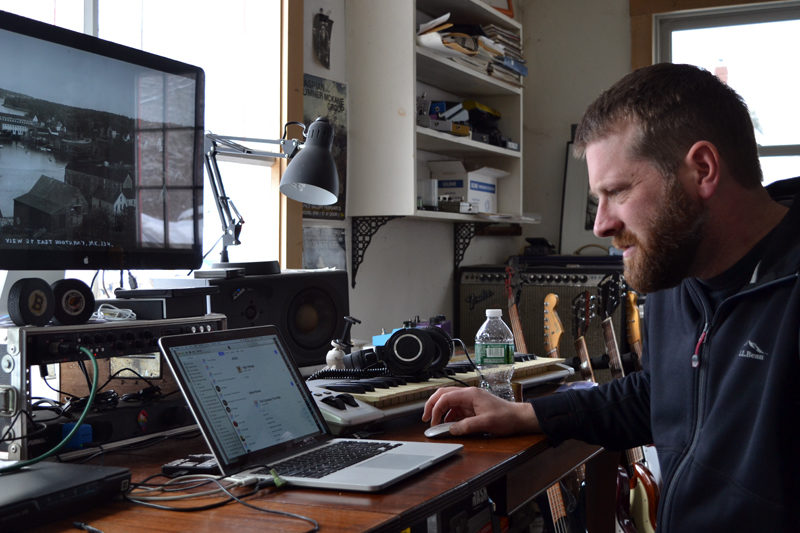 Sumner McKane at work in his studio. (Christine LaPado-Breglia photo)

Johnson was already familiar with McKane’s stellar work on the 2013 film “The Maine Frontier,” which features the turn-of-the-last-century glass-plate photography of Isaac Simpson combined with archived film, interviews, and a musical soundtrack.

The success of “Wish You Were Here” led McKane to make “The Northeast by Eastern.”

McKane offers “live” versions of “The Northeast by Eastern,” as he will at Lincoln Theater on Jan. 28, as well as “The Maine Frontier” and his 2010 film about lumbermen, “In the Blood,” which he presented at the Camden International Film Festival.

During these live film presentations, he and his longtime bandmate, Whitefield bassist Josh Robbins, perform a live soundtrack composed by McKane. McKane was scheduled to present a live version of “In the Blood” to students at Bruce M. Whittier Middle School in Poland the day after his interview. “In the Blood,” he said, has toured “close to 30 schools.”

Of the music with which he accompanies “The Northeast by Eastern,” McKane said, “I kind of had to learn a different style, more jazz-oriented,” because of the era in which the film is set. “I had to learn some different material and come at how I score a project differently than I normally would – more peppy and happy.”

McKane is currently at work on “Speedway Maine,” a movie about race-car drivers due to be completed this summer. “Just like with stock cars, the film needs a lot of sponsors. I am still looking for sponsorships,” he said.

“The Northeast by Eastern” plays at 2 p.m., Saturday, Jan. 28 at Lincoln Theater, 2 Theater St., Damariscotta. Tickets are $12 for adults, $10 for Lincoln Theater members, and $5 for youth age 18 and under. Tickets may be purchased in advance at the theater office, which is open from 10 a.m. to 1 p.m., Tuesday-Thursday, or starting one hour before curtain on the day of the show. Go to lcct.org or call the theater at 563-3424 for more information.

Go to sumnermckane.com to learn more about McKane and his work. Watch the trailer for “Northeast by Eastern” at bit.ly/2jNNbbK. Go to bit.ly/2jmIszd to watch the “Speedway Maine” trailer.