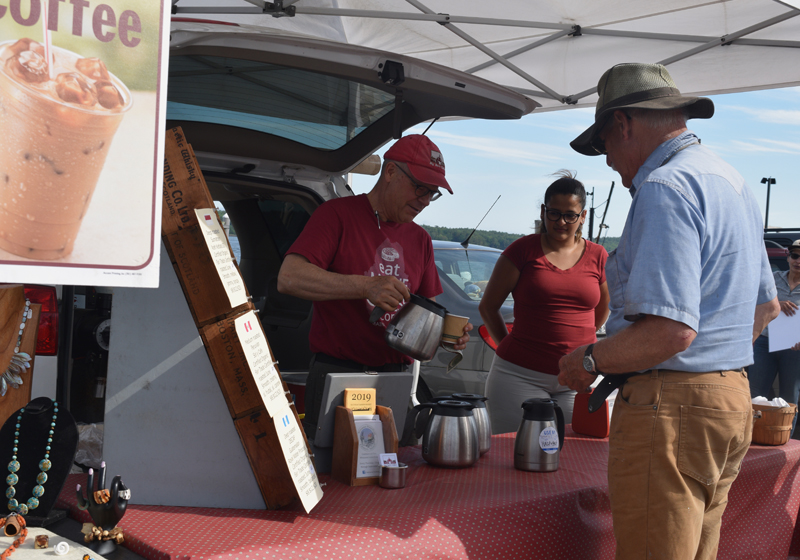 Only four markets in, the new Wiscasset Farmers Market on the recreational pier is off to a great start, no matter what the weather has in store.

After three years of thinking about a farmers market in Wiscasset, Claudia Sortwell, president of the market, went to the town for approval in late May.

“The town was ready to have its own farmers market,” she said, naming summer traffic as a major nuisance for customers traveling to markets outside Wiscasset.

Sortwell believes it is the first farmers market in Wiscasset.

Vendor Louis DiSalvo, of Westport Island’s Island Mushroom Co., said it felt like something was “missing” when there was no market in Wiscasset, because vendors have to travel long distances to sell their products.

The time coincides with the monthly Wiscasset Art Walk, when visitors stroll around downtown Wiscasset and enjoy art, music, and shops.

The market has 10 vendors selling everything from vegetables to socks. Prior to starting the farmers market, Sortwell set out to identify a variety of vendors. Once she got approval from the town, she was ready to start.

Sortwell is not looking for more vendors at the moment due to confusion surrounding the number of stands she wanted at the pier when she applied.

However, she is interested in expanding the number in the future and said there is more room on the pier. She would like to add a fisherman to finish off the large selection of items.

Sortwell chose to host the farmers market on the recreational pier because she knew the view of the Sheepscot River would bring people in.

The market’s vendors concur. “I think it’s going to be a great market because of being on the water,” said Melinda Bassett, of Three Duck Farm in Warren.

The location sets the Wiscasset Farmers Market apart from others in Lincoln County, which tend to be set in fields and parking lots.

In addition, Sortwell chose the spot because of its proximity to downtown Wiscasset.

“When you bring people from Wiscasset to here, it brings them to the downtown, so they are going to also buy things from the businesses,” Sortwell said.

“They need us now. This year is a tough year for the businesses downtown,” she said, citing the construction.

The first farmers market was June 6. The weather was beautiful on opening day, however, the market has had a rough go, with back-to-back Thursdays of constant rain.

However, Bassett said the weather has not been an issue. “The people have been coming out, rain or shine,” Bassett said.

“That really touched my heart, to see people coming in the middle of the rain to support us,” Sortwell said.

Although the market does not need more vendors, Sortwell said it could use some musicians to perform.

Musicians would volunteer to play, but could place a box out for tips. At other farmers markets where musicians play, Sortwell said, the vendors donate items to the musician, which could also be the case in Wiscasset.

Anyone interested in playing at the market can email Sortwell at clausortwell@yahoo.com.

Overall, Sortwell believes the market is already doing well, although some people do not yet know it exists. For this reason, vendors will take part in the upcoming Fourth of July parade in Wiscasset.

However, Sortwell said, “In general, I think we are getting a lot of support from people.”

“I think it’s tough to start something new,” Erin Snow, an apprentice with Appleton Creamery, said. “I think most farmers markets’ … bread and butter is the local people who come out week after week and start thinking about coming and getting the thing that they got last week that they loved. I think it will take a little while to grow.”

However, Snow expects the market to see more customers due to the level of excitement vendors have for the new venture.

Depending on the success of the summer farmers market, Sortwell is interested in finding a place to host a market in the winter.