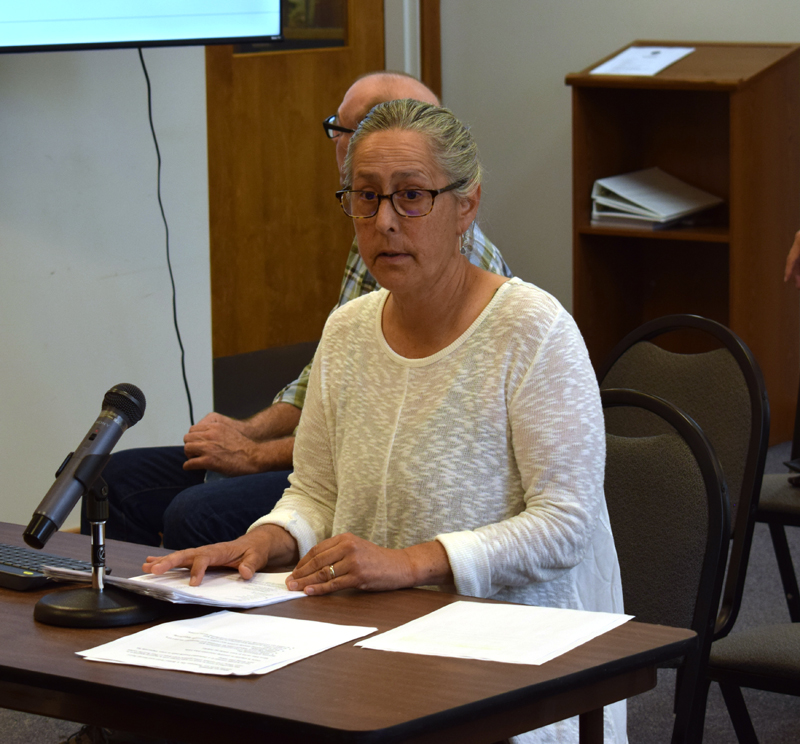 Mary Anne Moisan, of the Damariscotta Region Safety and Accessibility Collaborative, presents the results of a 16-question bicycle survey to the Damariscotta Board of Selectmen on Wednesday, Aug. 4. The survey indicated a desire of cyclists for wider shoulders, more dedicated bicycle routes, and more bike racks in town. (Evan Houk photo)

The Public Safety and Accessibility Collaborative conducted a survey this spring that illuminates some of the challenges faced by cyclists in Damariscotta.

The 16-question survey received 134 responses and showed many cyclists feel roads are too narrow and lack a proper shoulder, that there is a lack of dedicated bike paths, and there are too many cars driving too fast.

Mary Anne Moisan, a member of the collaborative, presented the results of the survey at the regular meeting of the Damariscotta Board of Selectmen on Wednesday, Aug. 4. She said the survey is a starting point for gathering information to improve bicycling accessibility in town.

“We thought we’d collect some data and get some information about where people are riding their bicycles, how often they ride, why there are some barriers to riding, and if people had suggestions to help make Damariscotta more bicycle-friendly,” Moisan said.

Respondents ranged in age from under 18 to over 65 and are fairly well-balanced across the age groups.

Moisan read a comment from a survey respondent who said, “I would like to ride my bike more, but don’t feel safe due to traffic.”

There were 125, or 94.7% people, who said that narrow roads or lack of shoulders prevent them from riding more often, and 71.21% said there are too many cars or that cars drive too fast to bike more on Damariscotta’s roads.

“’What roads would you ride on more often if there were safety improvements made?’ These four roads came up consistently, here and in the comments … Biscay Road, Bristol Road … Main Street downtown, and Main Street Business Route 1,” Moisan said.

She noted once Bristol Road crosses the town line from Damariscotta to Bristol, the shoulders are wide and paved.

Selectman Josh Pinkham said in the past, the town pushed the Maine Department of Transportation to widen the shoulders on both Biscay and Bristol roads when doing work, but the department declined. Both are state-maintained roads.

He also said the town is looking to pave Egypt and Belvedere roads, but there is only so much right-of-way the town has, so the roadways cannot be widened for bicycles.

“But the roadways will be better,” Pinkham said.

Moisan summed up the general conclusions of the survey with a comment from a respondent:

“I have used a bike on all of these roads. They are all, in a technical sense, lethal to bike on. I think money could be better spent looking for creative solutions for dedicated bike routes,” she read, adding many people expressed a desire for more bike-only paths and bike racks in town.

“Besides addressing the safety concerns of our current residents and providing those opportunities for exercise and recreation as a part of a healthy lifestyle, we really see improving bicycle access and safety as a growth opportunity for the town to attract more business and tourism to the area and to make our community more attractive to potential home buyers,” Moisan said.

Also on Wednesday, Damariscotta resident Corey Redonnett, who lives on Church Street, expressed concern about speeding issues on the north end of the road and asked if the speed limit could be lowered from 35 mph to 25.

“I’m pretty sure people are hitting 50 coming down by my house and it’s a very blind corner,” Redonnett said.

He added that three new families with small children have moved in over the last two years and he is concerned for residents’ safety on Church Street.

Town Manager Matt Lutkus said the town has requested a speed review with Maine DOT for Church Street, but it may not help in lowering the speed limit because of the way the department analyzes speed on roads.

“The way they assess the speed is they determine how fast people are going and they take the 85 percentile of that speed and that’s what they use for the speed limit. So, it’s kind of the reverse of what you think,” Lutkus said.

Lutkus also mentioned that the town is in the design phase of a sidewalk on Church Street that will run from Pleasant Street to Main Street/Business Route 1.