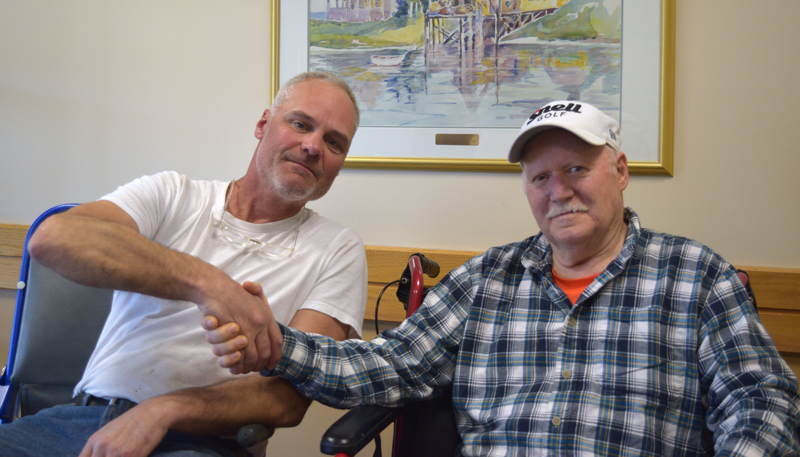 The story begins about 50 years ago when a Connecticut man saved two men fishing in a canoe that capsized on a lake in early spring. He brought the men to his house and warmed them up with coffee and blankets. Cut to April 2019, those men’s savior was himself rescued when his boat capsized on Damariscotta Lake in Jefferson.

“It’s an ironic thing. I saved two guys and all of a sudden I need the same help and needed someone to come to my rescue,” David Drever, 80, of Washington, said.

Drever has fished on Damariscotta Lake for almost 45 years, but mid-morning on Monday, April 22, he found himself in the roughly 45-degree water.

Drever had been fishing for lake trout on his older 14-foot aluminum boat when he repositioned himself after being out on the lake for a half-hour. He lost his balance when he shifted his weight.

“When I started going over, I pulled the boat with me to try to right myself and that was a big mistake because it sunk the back end of the boat,” Drever said.

Drever was fishing in the main basin of Damariscotta Lake, which is about 50-55 feet deep, he said.

“I started thinking pretty heavy,” he said. “I started to weigh my options.”

Since the boat was upside down, his first plan of action was to climb on top of the boat to get part of his body out of the water. However, he couldn’t stabilize the boat enough to get on top.

After giving up on the first plan, Drever noticed his life jacket was caught on the boat. One of his arms had come out of the flotation device, which was not zipped up.

At one point, he reached for his phone to call 911, but it didn’t work.

He looked at the shore, which was about 350 yards away, and questioned if he could swim there.

“I started thinking, ‘What am I going to do when I get to shore? I’m going to be totally exhausted; I’m still going to be just as frozen,’” Drever said.

Time was adding up. Drever said he started to panic because he had been in the water for 15-20 minutes.

“I’m starting to lose it; I don’t have much going for me,” he thought. “So that’s when I started hollering for help. That’s the only option I had left.”

David Reiss, 51, of Westport Island, was out fishing at the same time. He was out preparing for the Maine Bass Nation Club Tournament that was scheduled for the following week.

“I just happened to have the week off from work and I looked at the weather and I said, ‘Well, I better go today because the rest of the week’s weather was going to be terrible,’” Reiss said.

He almost didn’t go after his trailer got stuck in a ditch off his driveway while he was backing up. Two people on their way to work stopped and helped him out of the ditch. Reiss made it to Damariscotta Lake about an hour and a half later than he had planned.

On that day, Reiss was not listening to music in his headphones like he typically does. He was also fishing in a different end of the lake than usual.

Drever screamed for help. Reiss thought he heard something, but assumed it was someone on shore or working outside.

“But then I heard it again, so now I’m kind of listening. I’m still fishing, but I’m listening,” he said.

When Drever screamed for a third time, Reiss started in the direction of the sound.

“God willing, the man is over there fishing with his motor off and heard it,” Drever said. “I could not believe it. When I saw that boat coming up over there and turned toward me, my God, I think I had an extra five minutes of life all of a sudden.”

Reiss had been over a mile away from where Drever fell into the lake. When he first saw Drever’s upside-down boat, he thought it was an ice cake.

Drever’s boat had drifted about 20 yards away from him by the time Reiss arrived.

“I wasn’t panicked; I wasn’t afraid,” Reiss said of his feelings when he got to Drever. “I just knew that this individual needed to get on my boat.”

He expected that if he called emergency services, Drever would be fine.

Reiss tried multiple ways to get Drever onto his boat.

Before waking up in an ambulance, Drever’s last memory was being pulled into the back of the boat and seeing his rescuer’s face. Reiss said Drever’s body was past the point of shivering and he knew he was hypothermic.

“If he didn’t show up when he did, I probably wouldn’t have had more than a minute left,” Drever said.

After placing Drever in a fleece cap to warm up and calling 911, Reiss reached out to the person he knew would be available to help – Joe Holland, of Jefferson.

Holland has known both Drever and Reiss for a long time.

“He was the first person that came to mind … because you know Joe, he’s always there,” Reiss said.

Holland met them at the boat launch with blankets and helped to warm Drever by rubbing him for “what felt like forever,” Holland said.

Like Drever, Holland has experience helping people out of the water who were experiencing hypothermia. One of those times, Holland and Reiss were on a trip to New York, fishing in the St. Lawrence River.

“I think knowing that, and knowing I was nearby, he reached out to me,” Holland said.

Reiss was able to collect some of the items that fell out of Drever’s boat when it capsized.

Waldoboro Emergency Medical Services brought Drever to LincolnHealth’s Miles Campus. Hospital staff got his temperature up and ran some tests.

“They figured I might have had a heart attack… the next thing I know they are transporting me down to Maine Med,” Drever said.

He was given Heparin, a blood thinner, before undergoing heart tests. Complications from the Heparin caused nerve damage to his left leg.

He went into surgery for the blood clots in his back.

Altogether, Drever spent a week in the hospital, where his wife visited him every day.

Currently, Drever has a brace on his left leg. He can use a walker, but also has a wheelchair. He will begin physical therapy soon to see if he can get the nerve to function again, he said.

Drever and Reiss are “grateful” for each other and to be where the other was that morning.

As a semiprofessional bass fisherman, he has safety tips for people who go out fishing.

He suggests that when people go out, they should remember to wear a life jacket, with a whistle on one shoulder strap for easy access.

Reiss said it is best for people to have a complete set of dry clothes to change into in case a boat capsizes.

Lastly, boaters should tell someone where and for how long they will be out fishing, he said.

In addition to taking safety precautions, Holland said it is important to “Always pay attention to your situation around you and always look to help your fellow man,” mentioning the men who helped Reiss get to the lake that day.

The two Davids met for the first time since the rescue at an interview with The Lincoln County News. Drever said the meeting felt like “closure.”

“He’s going to be my friend for the rest of my life, I know that,” Drever said of Reiss.

After his near-death experience, Drever said of fishing again: “I’d go out in a minute.”