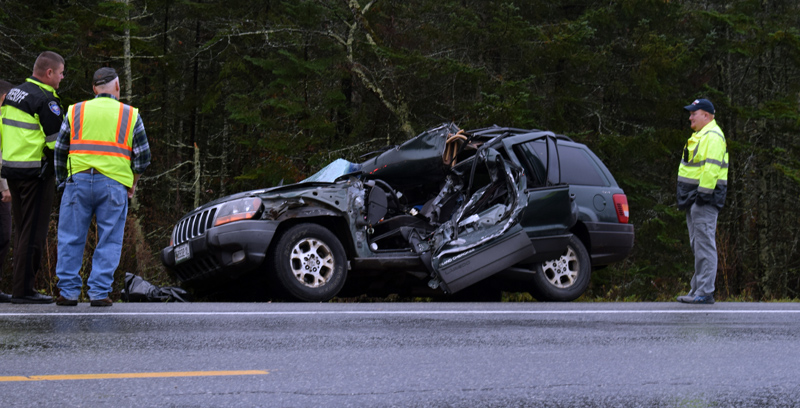 Emergency personnel assess the damage to a Jeep Grand Cherokee after a collision on Route 1 in Newcastle the morning of Monday, Oct. 28. The SUV rear-ended a box truck, according to police. (Evan Houk photo)

An SUV rear-ended a box truck on Route 1 in Newcastle the morning of Monday, Oct. 28, mangling the Jeep but causing no serious injuries.

Jessica Tillson rear-ended the box truck and the Jeep went underneath the steel bar on the back of the truck, crushing the Jeep’s front half, according to Dennison. She told police she was reaching for her coffee when she hit the truck.

There was only minor damage to the box truck, which was later driven away from the scene. Quick Turn Auto Repair & Towing removed the Jeep.

Jessica Tillson was taken to LincolnHealth’s Miles Campus in Damariscotta with neck pain, according to Dennison. Her passenger, Bruce Tillson, was also taken to Miles with minor injuries. Jacobs and his passenger were unhurt.