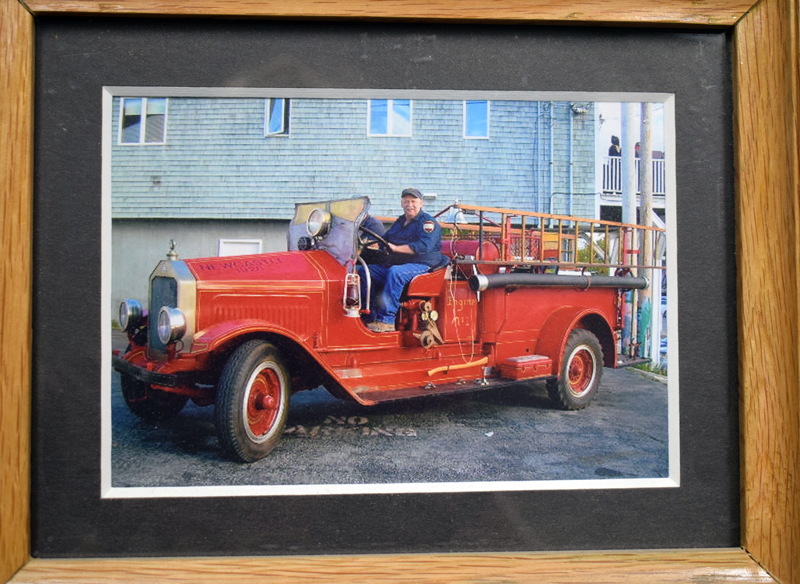 Newcastle Fire Chief Clayton V. Huntley Jr. at the wheel of a 1928 Maxim fire engine. The engine originally belonged to the Taniscot Engine Company and Huntley worked to find it and get it back. (Evan Houk photo)

Members of Newcastle’s Taniscot Engine Company remember longtime Fire Chief Clayton V. Huntley Jr. fondly as a friend and mentor and for his 50 years of service working to improve training and recruit firefighters.

“He was a true native son of Newcastle, one of Newcastle’s finest,” firefighter Tom Stevens, who served as chief for a year prior to Huntley, said during an interview on Sunday, April 11 at the newly named Clayton V. Huntley Jr. Station.

Huntley died April 5 after a yearlong bout with cancer.

Deputy Fire Chief Casey Stevens, Tom Stevens’ son, said the department came up with the idea to name the fire station for Huntley in January and hoped to have a naming ceremony after Huntley recovered from his illness.

“It wasn’t intended as a memorial,” Tom Stevens said.

The Newcastle Board of Selectmen approved the name change in a proclamation April 6.

Casey Stevens said that Huntley’s 50-year anniversary with the department was in January and Huntley had served as chief since 1990.

Members of the department installed the new sign for the fire station April 3 and Huntley was told about the honor.

Tom Stevens said that Huntley was always looking to recruit new members, including Tom Stevens himself in 1982. Casey Stevens grew up in the fire department and ended up joining as a junior firefighter when he was 16.

“I couldn’t have asked for a better mentor for firefighting than Chief Huntley,” Casey Stevens said.

He said that Huntley usually knew the best and safest way to go about any task in the fire company.

“Watching Clayton and everybody having the trust in him, you knew that what he did or what he said was probably the best way to do it,” Casey Stevens said.

He said Huntley advocated for all types of training and would always participate along with the other members.

“He was never one to ask you to do something and him not do it,” Casey Stevens said.

Casey Stevens talked about how after every incident or call, Huntley would discuss it with the members, always looking for ways to do things better.

He said Huntley was always first to respond to a fire call when he was chief.

“He learned that if he could get there before the rest of the members with the equipment, he could have time to see what’s going on and put a plan together in his mind and have good, clear directions by the time we get there,” Casey Stevens said. 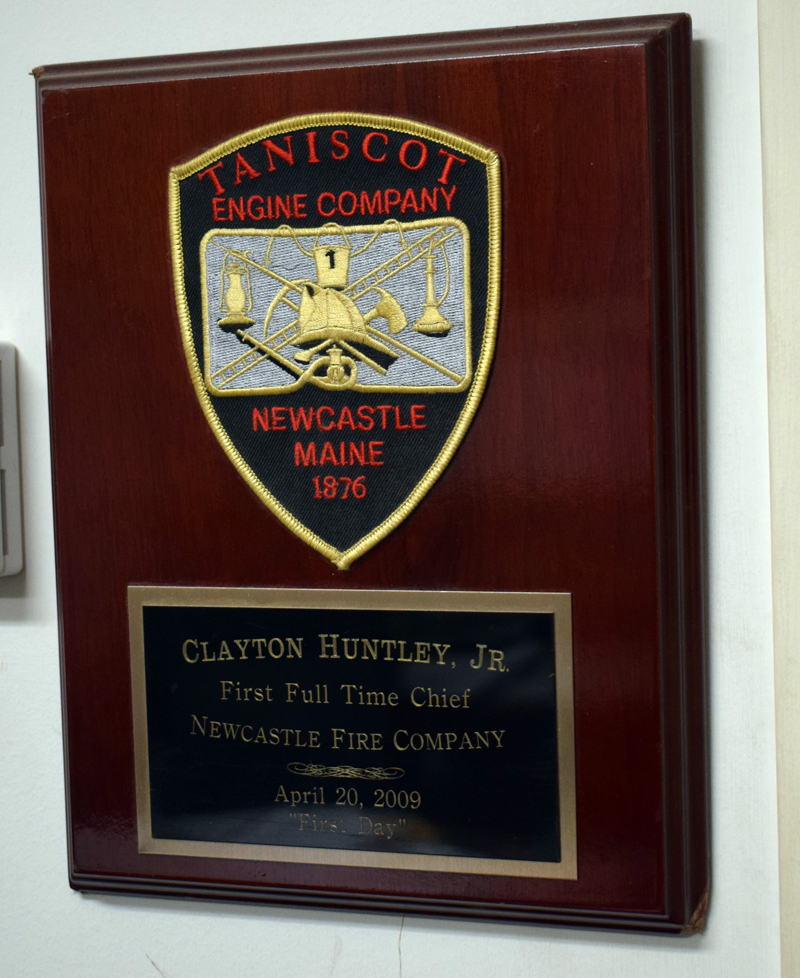 Tom Stevens said that the “controlled chaos” of a fire scene makes it hard to stay organized unless someone responds first and puts a plan together.

Tom Stevens said that Huntley was committed to the history of the Taniscot Engine Company, which was founded in 1876 and has always been an entity independent of the town of Newcastle.

Both Tom and Casey Stevens talked about Huntley’s acquisition and restoration of two historic pieces of fire equipment — an original 1876 hand pumper and a classic 1928 Maxim fire engine.

Tom Stevens said that being a private company allowed for more access to grants, which Huntley always doggedly pursued, so as to limit use of Newcastle tax dollars.

Casey Stevens said that Huntley was also steadfast in pursuing donations and sent out a letter every year to Newcastle residents seeking financial support for the department.

“We’ve always been able to keep our budget low without having to request money through taxes from the town, always trying to seek other revenue sources. He was successful for many, many years in doing that,” Casey Stevens said.

Tom Stevens said that Huntley continued the grant work of former member Jim Brinkler and was able to upgrade much of the equipment in the station, so he left the Taniscot Engine Company a well-equipped volunteer fire department.

“For a volunteer fire company, the technology that we have is just as good as some of these bigger departments,” Tom Stevens said.

Bryant said that mutual aid was mostly between the towns of Damariscotta, Newcastle, and Nobleboro in the beginning, but Huntley worked to expand that to all of Lincoln County.

He said Huntley’s biggest concerns were training, safety, and saving the town money.

Tom Stevens remembered Huntley as a serious fire chief but also a fun-loving guy who liked to give nicknames.

He said Huntley called him “Veto” because every time Huntley wanted to spend money, he would vote against it. He said one of the members was nicknamed “Peach Fuzz” and Huntley bestowed the nickname “Newman” on Lincoln County Fire Academy President Michael Santos, an assistant fire chief in Newcastle who died in 2015.

Casey Stevens said that Huntley wouldn’t have been able to accomplish a lot of what he did without the support of his wife, Margo Huntley.

Bryant said that Margo Huntley was heavily involved in the fire company and helped with rehab efforts at fire scenes.

A fire truck procession for Clayton Huntley will run from Strong-Hancock Funeral Home in Damariscotta across the bridge to the Clayton V. Huntley Jr. Station in Newcastle starting at 1:30 p.m., Saturday, April 17. A walk-through visitation will take place at the station from 2-4 p.m.