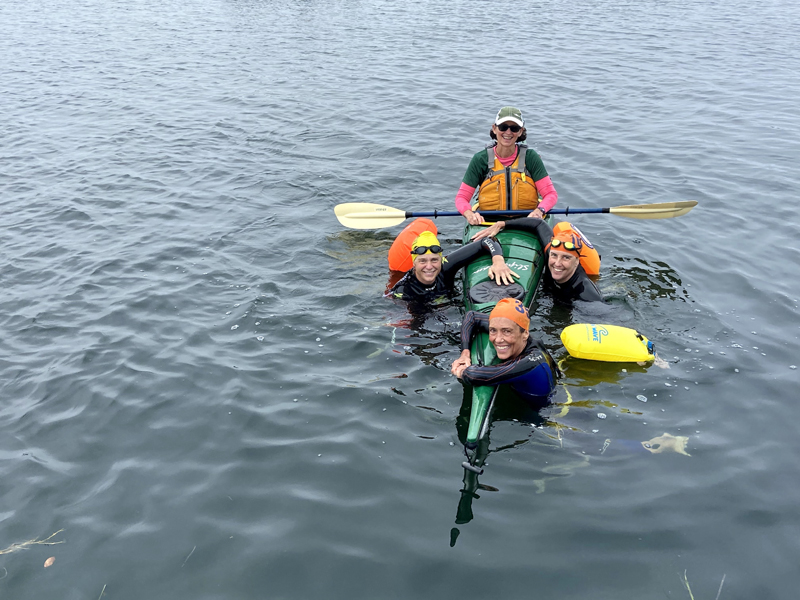 Clockwise from left: Meghan Phillips, KC Ford, Lili Pugh, and Lorna Fake on the day of their swim in Friendship Harbor on Aug. 22 as a part of Team Chewonki’s Cross for LifeFlight’s fundraiser. (Photo courtesy Lili Pugh)

As the fog rolled in and out of Friendship Harbor on the morning of Aug. 22, four women swam and paddled for three miles through the tidal waters. Seemingly inconspicuous in their kayak and wetsuits, these athletes raise more than $10,000 for the state’s only emergency medical helicopter service.

Cross for LifeFlight, formerly known as the Islesboro Crossing, is LifeFlight of Maine’s biggest fundraiser of the year. In the past, the event has consisted of a swim from Northport to Isleboro. However, the event has taken place virtually the last two years, with every participant engaging in their own “crossing,” be it on foot or in the water. 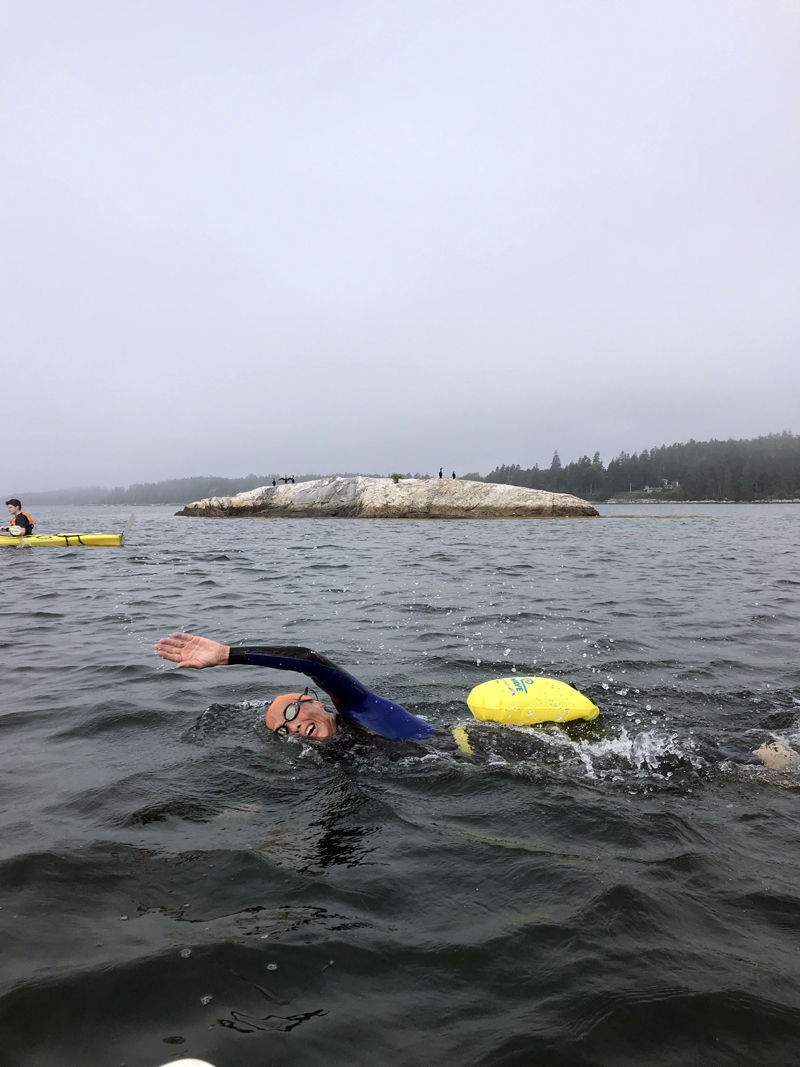 Lorna Fake swimming in Friendship Harbor on Aug. 22 with her safety paddlers in the background for the Cross for LifeLight fundraiser as part of Team Chewonki. (Photo courtesy Lili Pugh)

Last year, the four members of Team Chewonki, KC Ford, Megan Phillips, Lorna Fake, and  Anneliese “Lili” Pugh, swam a three-mile loop in Damariscotta Lake, stopping at islands along the way. The team is named as such because three of the four teammates work at the Chewonki Foundation, Ford as a Director of Admissions and Financial Aid, Phillips and Fake as teachers.

Since it was established in 1998, LifeFlight has safely transported over 31,000 patients. In 2011, Ford was one such patient.

While flying from Matinicus Island to Owls Head, Maine, a small plane carrying Ford and four other passengers lost power and crashed into the Penobscot Bay. All four survived, but Ford sustained life threatening internal injuries. A LifeFlight helicopter eventually took her to Central Maine Medical Center in Lewiston, keeping her stabilized and saving her life.

“Without my LifeFlight transport, I would have died,” Ford said in her Cross for LifeFlight profile.

Ford’s story eventually inspired Phillips to form Team Chewonki, and the team has now participated in the event going on five years. When she tells people what she is doing they tell her their own stories about LifeFlight.

“Everybody in this rugged, rural state has a story of how LifeFlight changed their life or the life of family or friends,” Phillips said in an email on Aug. 27.

This year Ford helped to shepherd her teammates through Friendship Harbor as a safety paddler. Additionally, in recognition of the tenth year since her accident, Ford paddled a 10-mile route in the Penobscot Bay during the last week of August.

“(The crew) are amazing people and are experts at what they do. I will do just about anything to support LifeFlight,” Ford said in an email on Aug. 27.

Pugh, an Alna resident and a competitive Masters swimmer, is the only member of Team Chewonki who does not work at Chewonki. Pugh had considered this year’s crossing to possibly be her last, but after swimming with the team on Aug. 22 she admitted that she’s reconsidering.

“As I got into it and I got to know LifeFlight a bit more, I realized that it was a great cause, that they do so much all over the state, and provide incredible services for people who are in need,” Pugh said in a phone interview on Aug. 27.

The funds raised with this year’s crossing will be put towards a third and final aircraft to LifeFlight as part of its latest fleet upgrade program. Past events have helped to fund two new state-of-the-art medical helicopters, specialized medical equipment, and advanced training for emergency medical providers across the state.

To donate to Team Chewonki go to lifeflight.donordrive.com/team/5090. Fundraising is open through Sept. 30.