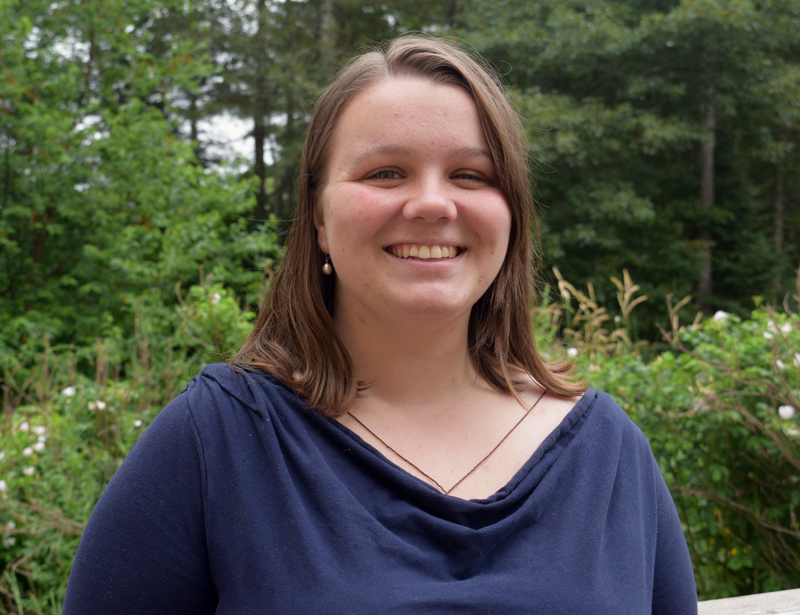 “I definitely know it’s not a decision that most people would be looking at, especially at this age, but I’m ready to go,” said 23-year-old Mary Catherine Eddyblouin, of Bristol, who will leave her familiar life in just over a month for a convent.

Eddyblouin’s home will soon become the Dominican Sisters of Mary, Mother of the Eucharist, a Catholic female religious institute in Ann Arbor, Mich. The convent is a branch of the Dominican Order, which follows the Rule of St. Augustine.

“The Dominicans teach and they preach — that’s what they do. They study for their entire lives,” Eddyblouin said. “That’s something that was very attractive to me about them.”

Eddyblouin will become a sister, or a woman who does her work outside the convent, while a nun, a commonly misused term, does not leave the grounds of the convent for her entire life.

Sisters in this convent have had national exposure with a segment on “The Oprah Winfrey Show,” which featured an inside look into their lives and vows.

Although persistent stereotypes would suggest otherwise, Eddyblouin’s age is the average for women joining the Dominican Sisters of Mary.

“We have a couple of girls just out of high school; we have one who’s finished her doctorate,” Eddyblouin said. “It’s kind of a spread, but most of the women entering are young.”

Like the rest of the women joining the convent, Eddyblouin will have to give up “materially, pretty much everything,” such as her cellphone, car, and personal items.

She will only bring clothing designated by the motherhouse, the founding house of the religious order, and books for classes she will take.

In the future, Eddyblouin wants to become a teacher. She is not sure which age group she would like to teach or exactly which subject at the moment, but she loves English, geometry, and physics.

The motherhouse will give her a teaching assignment after her third year at the convent.

Catholicism has been an integral part of Eddyblouin’s life since birth. Her father was raised Catholic, while her mother converted. 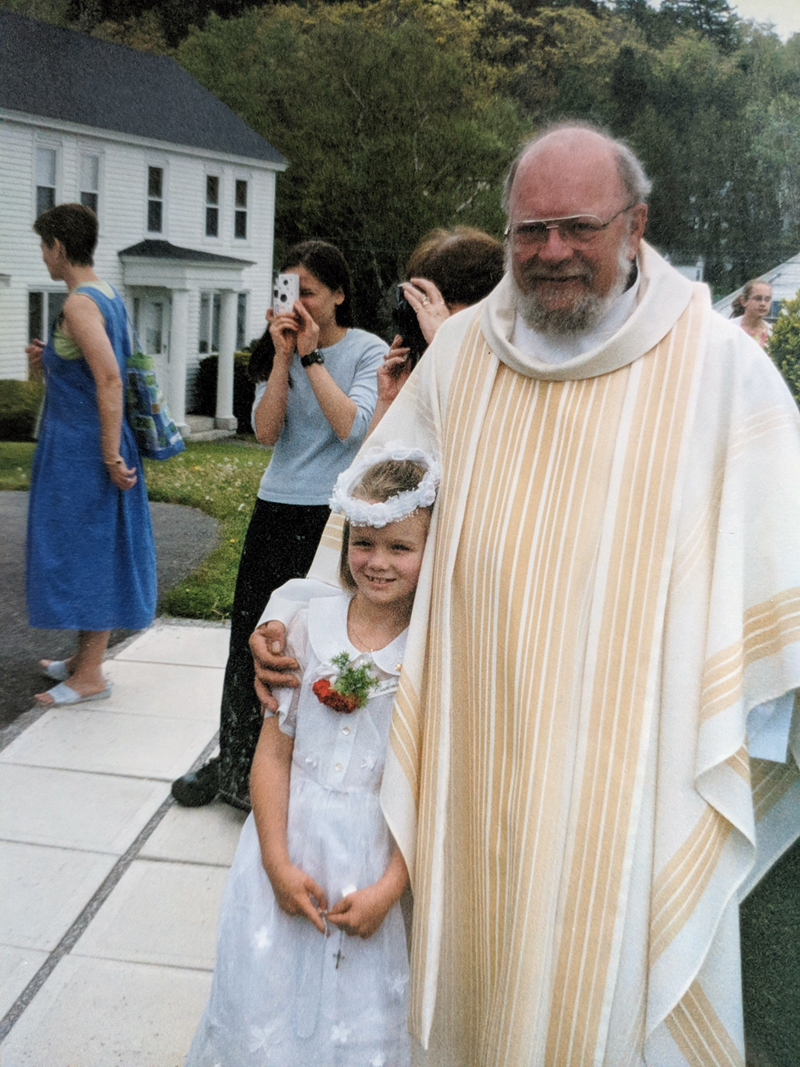 A young Mary Catherine Eddyblouin stands next to Fr. Raymond Picard after her First Communion at Our Lady Queen of Peace, in Boothbay Harbor.

“I was really blessed to grow up in a household where that was a very central thing. It was always through all the parts of family life,” Eddyblouin said.

Her family attends St. Patrick’s Church, in Newcastle, but on occasion, Eddyblouin said, she and her siblings are “treated” to the Latin Mass at the Basilica of Saints Peter and Paul, in Lewiston.

Although there was no defining moment when Eddyblouin realized Catholicism was essential to her identity, her experiences at diocesan retreats in high school helped clarify this for her.

She knew many people in high school who seemed perfectly happy without faith, but she felt a stronger connection to other young people like her who were excited to include faith in their lives.

“Seeing this contrast was really what made me embrace (my faith) on my own, independent from my family,” she said.

This year, she graduated as a triple major in theology, philosophy, and mathematics.

Going into the convent had “always been in the back of my mind,” Eddyblouin said. When she was about 6, she first met sisters from the Dominican Sisters of Mary, Mother of the Eucharist while on vacation with her family in South Carolina.

After her sophomore year at college, one of her friends left school to enter the convent.

The following year, in November 2017, Eddyblouin went on a retreat to visit her friend.

“Everything fell into place – this is where I’ve been headed, even though I hadn’t really known it,” she said of the convent.

She began to understand, “That’s where I belong. This is where I’m going to be most myself.”

Eddyblouin told her immediate family about her plans. She said they were not surprised.

“My extended family – they were surprised,” Eddyblouin said with a laugh.

Knowing she wanted to enter the convent was only the first step in the process of joining. She then had to apply.

“It’s a pretty thick stack of papers that involves a medical exam, dental exam, psychological exam, and a whole bunch of personal questions,” she said. “They are just trying to get to know you.”

A little more than a year later, in February 2019, Eddyblouin turned in her application.

“They encourage you to take a while, think about this, and I had been clear I was going to finish school,” she said.

A person in the convent must complete a bachelor’s degree, either before entering or while inside, as a minimum level of education.

Eddyblouin was accepted for pre-postulancy week at the end of June. During this six-day retreat in Michigan, applicants get to know the sisters and live their schedule.

During the last morning of pre-postulancy, Eddyblouin’s name was read off the list of women who were selected for the convent. There were 18 women there and 12 were accepted. The six who were not accepted made a mutual decision with the convent that they would not enter, she said.

Only once a year is a group accepted into the Dominican Sisters of Mary.

Aug. 22, the feast of the Queenship of Mary, will be Eddyblouin’s first day in the convent. She will then be known as Sister Mary Catherine.

Her daily schedule will start at 5 a.m. every morning, except on the weekends, when she will rise at 6:30. There are times for prayer throughout the day, as well as house chores, classes, recreational activities, meals, and spiritual reading and study. The scheduled day comes to an end around 8:30 p.m., with lights off by 10 p.m.

Eddyblouin has an eight-year process, known as formation, ahead of her before she makes her final vows. Until then, a woman can leave the convent at any time.

The first year, known as postulancy, will ask the crucial question, “Is this a life that I can live?” she said.

During this year, Eddyblouin will wear a uniform consisting of a blue skirt and vest, with a white shirt. 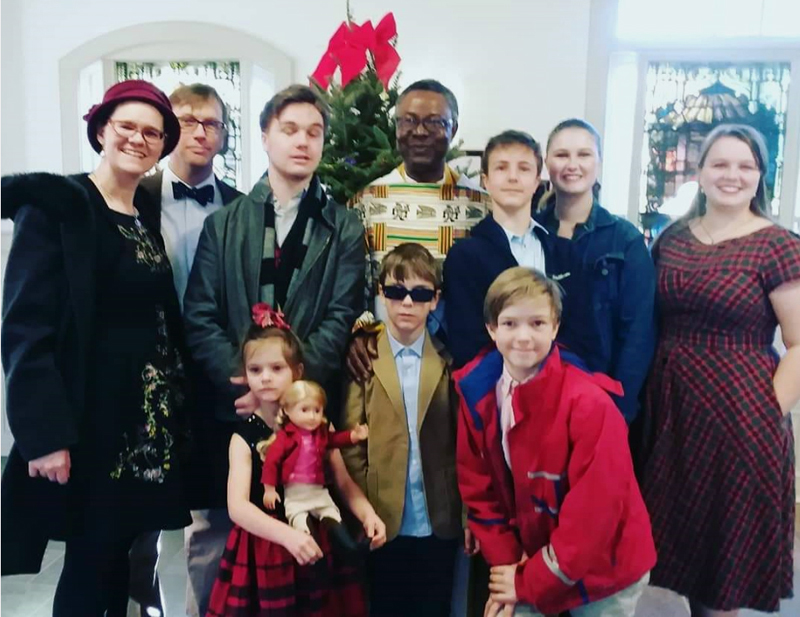 During the second and third years, known as the novitiate, a woman wears the habit, which consists of a white veil, long robe, and a scapular, or a piece of cloth that is worn over the shoulders and falls just shy of the feet.

After the first year, Eddyblouin will receive a new name. She will turn in three of her choice, and one is either selected from this list, or a different one is chosen.

“They really do take into account the names that you give them, because you are saying, ‘These are the saints that I feel especially close to or who have helped me through this year, or who I want to emulate,’” she said. However, in the end, mother superior, the head of a female religious community, decides the name. Sometimes a woman will receive or select a male biblical name or the name of an important male figure in her life.

Eddyblouin’s new religious name will be announced when she receives her habit.

At the end of the third year, a woman makes her vows of poverty, chastity, and obedience, which means she has committed to live this way of life for three years, Eddyblouin said. It is also known as marrying into the community.

Instead of a white veil, she will receive a black veil to wear.

“Even though you can leave the order at any time during those three years, according to the church, you are still bound to live by those vows until the three years are up,” she said.

In the sixth year, a woman renews her vows for another two years.

At the end of the eight-year process, a woman takes her final vows, “which is your no-going-back kind of thing,” she said.

The final vows are of poverty, chastity, and obedience.

As a requirement in the convent, a person must become debt-free.

Eddyblouin has about $13,000 in student loans to pay off. All of her loans must be paid off within the first three years of her eight-year journey in the convent.

She is working this summer at the Granite Hall Store, in Round Pond, to pay down those loans.

In addition to her own savings, a convent fund is set up at Bath Savings Institution in Damariscotta, and an online fundraiser has been set up at gofundme.com/mc-to-the-dominicans.

Eddyblouin’s advice to a young woman who is nervous, yet interested, in entering the convent is, “first of all, look us up, come visit.”

“It can be intimidating sometimes. They are so different and they live such different lives that even to say, ‘I just want to know more’ can feel like you’re saying ‘this is what I want,’” Eddyblouin said. “I promise, nobody’s going to think that.”

She said sisters are welcoming and great people to meet, and followed this with a joke: “Don’t be afraid they are going to trap you in the convent – that’s not what they’re going for.”

Eddyblouin wants to give thanks to all that helped her to this point in life.

“I’d like to thank the community, the town, and the church. They’ve all been very instrumental in making me who I am, which is someone who is able to say yes to this,” she said. “I’m very grateful for that.”