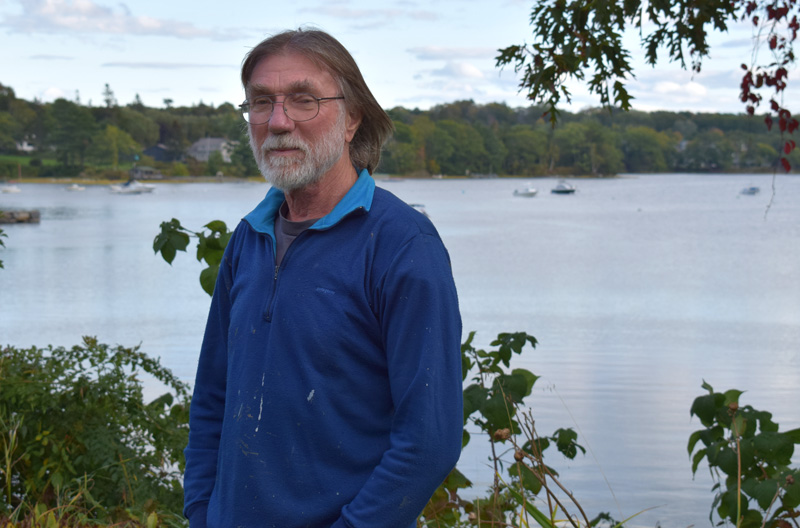 Nigel Calder, author of the “Boatowner’s Mechanical and Electrical Manual,” stands behind his home on the Damariscotta River in Newcastle, Friday, Oct. 4. Now in its fourth edition, the book has sold over 300,000 copies worldwide. (Evan Houk photo)

Ever since he heard about the Sunday Times Golden Globe Race, the world’s first nonstop, single-handed, round-the-world yacht race, in 1968, Newcastle resident and internationally known author Nigel Calder has been cruising by boat around different parts of the globe.

“That got a whole lot of us fired up on the thought that we could build a boat and sail around the world. I never quite got over that,” he said.

The type of cruising Calder has mastered is not the type of passive cruising adventure that takes place on a giant Carnival or Royal Caribbean floating hotel that can be purchased in the form of an all-inclusive ticket.

Cruising, in this context, refers to a much more involved and hands-on hobby that requires the careful navigation and long-term maintenance of a sail or powerboat. Many cruisers take off in their boats for months or years at a time and often sail along coastlines.

As a press release concerning Calder stated: “Cruising on a boat is also sometimes referred to as ‘fixing your boat in exotic places.’”

This natural inclination toward boating led Calder to write his popular “Boatowner’s Mechanical and Electrical Manual” after he built one of his first boats in Louisiana, christened the Nada.

In an interview at his home on the banks of the Damariscotta River, Calder said the book is geared toward cruising boat owners like him. The need for a repair manual is more pronounced for a cruiser because this type of long-term boating stresses the electrical system.

The book, which has sold over 300,000 copies and is now in its fourth edition, is Calder’s claim to fame. A 2002 article in Cruising World identifies Calder as a “well-known onboard-systems specialist, marine author, and cruising family man.”

Calder said the royalties from the book have provided him an income adequate to maintain a relatively modest lifestyle and continue to cruise and work on any other projects that interest him, most of them having to do with improving the energy efficiency of cruising boats.

“Starting around 2007 … instead of just writing about boat systems and what other people were doing in the systems world, I got into trying to push the envelope on product development,” Calder said.

He said around this time, the work being done on hybrid automotive engines inspired him to look into applying more energy-efficient technology to boats.

Calder’s most recent accomplishment, an advanced generator replacement technology that he calls an “alternator on steroids” for boats, has already won a few prestigious boating awards, like the overall Dame Design Award at the Marine Equipment Trade Show in Amsterdam in 2018.

The invention also won the Innovation Award in the electrical systems category at the International Boatbuilders’ Exhibition & Conference, held in Tampa, Fla. from Oct. 1-3.

The Integrel 9-kilowatt “alternator on steroids” was developed by Triskel Marine Ltd. and is said to generate five to 10 times the output of a conventional alternator.

Calder was part of the design team for the technology and helped to secure the initial $3 million investment to fund its development.

Calder said he is more of a concept person when it comes to these types of projects. He keeps the focus on the big picture and makes sure everyone stays on track.

He said his 30 years as a marine technical journalist have built up his contacts in the boating world, so he can to pull together all the right people to produce an invention like the Integrel advanced generator replacement.

“I have a degree in philosophy. I have no engineering background. Because of all the testing and the work I’ve done on these projects, I have a really good knowledge of boat efficiencies, propeller efficiencies, and how all these bits and pieces interact. When it gets down to electronics, I know what we need it to do, but I haven’t got a clue how to make it do it,” Calder said.

Calder said his background in philosophy and the element of logic inherent in the discipline prepared him for his work with boats in a different way.

Calder said he is working on another grant application and has a few other ideas to improve boating efficiency, but did not want to reveal any details just yet.

The Sunday Times Golden Globe Race that inspired Calder’s lifelong fascination with boating was sponsored by the British Sunday Times, making it big news in Calder’s home country of England in the late 1960s.

Calder, who grew up in the market town of Newbury, England, said he first caught the sailing bug when he was 12 years old at a Church of England summer camp that had a few sailing dinghies.

After meeting his wife, Terrie Frisbie-Calder, in England, the two built a couple of long, thin canal boats to travel through England’s narrow canals.

Frisbie-Calder is an artist who works mostly with watercolors on the couple’s cruising adventures.

Calder said they lived on the canal boats for about six years before moving to Louisiana.

Frisbie-Calder was in England with her father, who was stationed there with the U.S. Air Force, when the two met. They eventually moved to Louisiana together when Calder realized he could make three times the money in the oil fields of the Gulf of Mexico than at his job in the foundry of a machine shop, where he maintained large generators.

Calder said all it took to get him the job was a $2,000 bribe to the right person.

“I reckoned that in three months, I’d basically pay off the bribe and break even from what I was making in England, and then I’d be ahead of the game,” he said.

He said there were no safety standards for the oil fields when he worked there between 1978 and 1984.

“I got blown up, actually, probably my third week on the job. … I was lucky I didn’t get killed,” he said.

The couple then bought a bare boat hull in Louisiana, what Calder described as “like a big plastic bathtub,” and built a boat out of it, the Nada.

His job in the oil fields was one week on and one week off, which gave Calder and his wife 26 weeks a year to work on building their boat.

“I worked out there until the boat was finished. … The pay was good, so we were able to pay for the boat as we went along,” Calder said.

At the time, there was no decent technical material on how to wire and maintain all the systems on a cruising boat, Calder said.

“I decided if I needed this kind of technical information, then other people did. So I wrote a book. … The trick is to keep the information accessible to ordinary boat owners, trying to find a balance between being quite technical and making it readable,” Calder said.

Calder and his wife ended up raising their two children on that boat, cruising for several months out of the year, only coming back to land when it was time to pick up one of Calder’s biannual royalty checks.

In 1991, wanting to give their children a home base to identify with, the couple ended up in Maine after a visit to Calder’s publisher in Camden, International Marine, which was later bought by McGraw-Hill.

“The minute we got into Maine, we liked the look of it,” Calder said.

Calder said he and his wife have sailed the coast from Popham Beach to Acadia National Park several times and have “done the run from Maine to Miami through the Cape Cod canal and via the East River in New York several times.”

More locally, Calder enjoys sailing in the cluster of islands south of Dix Island and off of Whitehead Island in Knox County.

From their base in Newcastle, the couple has been cruising coastlines in different parts around the world ever since.