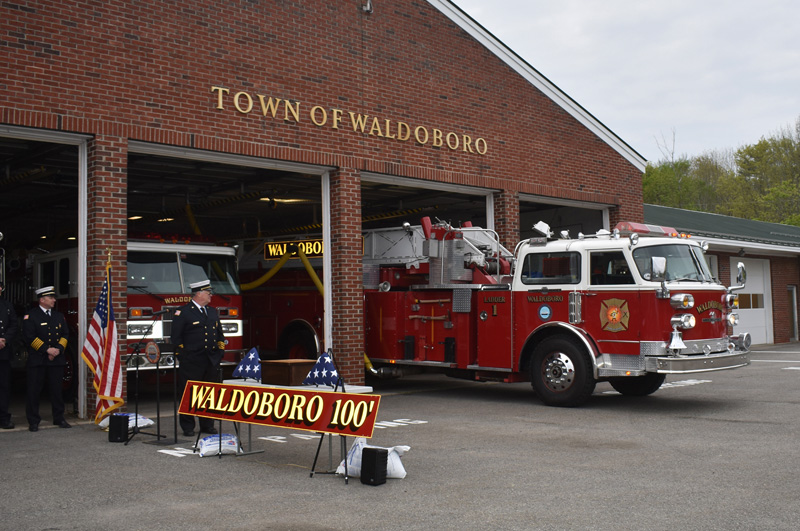 After years of service to two towns in two different states, Waldoboro Ladder 1 was officially decommissioned from service during a ceremony at the Waldoboro Fire Department the evening of Saturday, June 1.

The 1981 American LaFrance ladder truck, which has a 100-foot ladder, was pulled out of the fire station and officially retired shortly after 7 p.m., when Waldoboro Fire Chief Paul Smeltzer called into Lincoln County Communications and informed dispatch that the ladder truck was “10-7,” out of service.

The vehicle will return to New York state for restoration and display in a museum. It will also participate in parades, including the town’s anniversary celebration in August.

At the outset of the decommissioning ceremony, Waldoboro Deputy Fire Chief Dale Smith thanked the board of selectmen for approving the sale of the ladder truck to the New York department.

John Woloszczak, who worked to bring the ladder truck back to Warwick, said he worked as an officer on the truck and thanked the firefighters from Waldoboro for taking such good care of it.

“This is like watching your high school car come back to life. You guys did a great job and you should be proud of yourselves, because this truck shouldn’t be here right now,” Woloszczak said.

According to Woloszczak, Waldoboro’s ladder truck was the last “midship” American LaFrance in service, with only one rear-mount model in service in Illinois.

“That’s the end of this generation of truck, as far as we can see. This is technically a little more historic than you may realize. American LaFrance was a very popular fire truck back in the day and this is it,” Woloszczak said.

Woloszczak said the truck would be repainted in New York, with one side retaining its Waldoboro decals and one side sporting the colors and logos of Warwick.

According to Woloszczak, the ladder truck participated in over 40 funerals for firefighters who died while responding to the 9/11 attacks in New York City.

Woloszczak said he hopes to get the truck into the New York State Museum in Albany.

At the decommissioning ceremony, Smeltzer talked about the history of the Waldoboro Fire Department, starting with the purchase of a fire engine from the Old North Church in Boston. He said the department still owns that engine and two more of the original fire engines used in town.

“This is why we are so glad the ladder truck is returning to its original home in Warwick,” Smeltzer said.

Smeltzer said a “Waldoboro 100’” sign from the ladder would be donated to the Waldoborough Historical Society.

Firefighters William Bragg and John Emerson removed the bell housed on the front of the ladder truck.

Smeltzer explained that the bell, which had been on every one of the department’s ladder trucks, would be placed on the new ladder truck when it arrives in Waldoboro this fall.

“Tonight, to signal the end of its service, as we acknowledge that this beautiful piece of apparatus that has served two grateful communities for nearly 40 years has responded to its final emergency call and its aerial shall not extend again for all future alarms, we symbolically will ring the bell three times, signifying the completion of its final call to service,” Smeltzer said.

In addition to firefighters from Waldoboro and Warwick, the ceremony was attended by first responders from Bremen and Waldoboro, in addition to Friendship Fire Chief Kevin Benner.