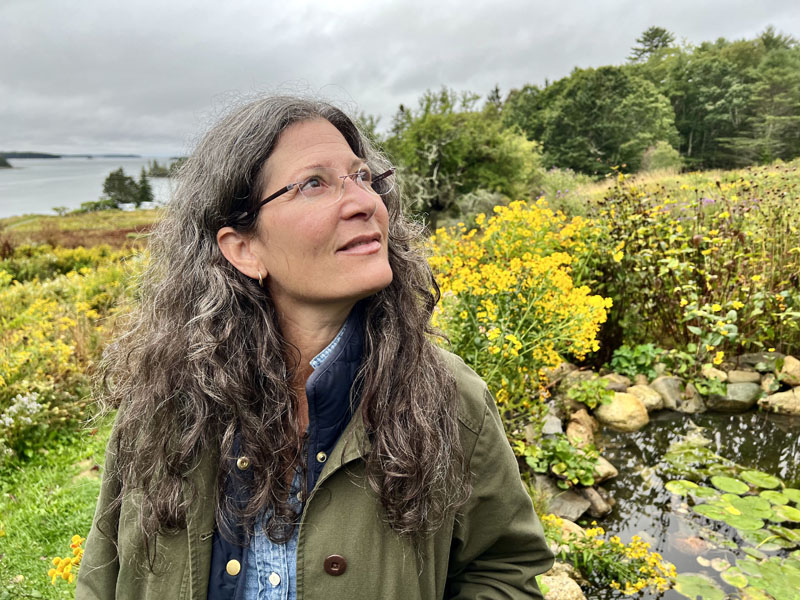 “The Maine Conversation” podcast host Emily Greenberg on location during an episode recording this summer. All conversations are recorded in the field then crafted into a final episode, which Greenberg said feels like a present she gives her guests and listeners. (Photo courtesy Emily Greenberg)

In a Bristol home studio overlooking the water, Emily Greenberg edits interviews recorded across the state for her podcast, “The Maine Conversation,” which is approaching its first anniversary.

Since she began the project last year, Greenberg said she has learned about the details of audio production, the art of the interview, and the power of word of mouth, along with new insights about herself and her guests.

Greenberg released her first episode of the podcast last February, which featured a conversation with woodworker and essayist Barnaby Porter, of Walpole, about his memory of deer crossing a frozen Damariscotta River.

She has since has featured nine conversations with guests from puffin researchers to musicians to wreath-makers. Some interviewees she meets in her day-to-day life and others she seeks out. Now, Greenberg said, listeners even reach out to her and ask to be a guest.

While on the podcast, guests discuss their thoughts, their lives, and their work in unscripted, comfortable conversation ranging from 30 minutes to an hour. Porter is the only recurring guest. Within this variety, Greenberg said the common thread is her genuine curiosity about other people, which she feels she is in a unique position to share.

“It’s almost like the podcast has been the thing that I was always meant to do, but only now, and I wouldn’t have been in the right place at the right time, say, 10 years ago,” she said.

Before she moved to Maine from Florida in 2020 to pursue a “simpler” life, Greenberg spent the first chapter of her life working high-pressure jobs in publishing, advertising, and marketing, followed by a second chapter in education.

Those experiences prepared her for the podcast, Greenberg said, helping her to communicate and to make others feel comfortable.

Every interview is recorded in the field, meeting the guest where they live or work. Greenberg then returns to the studio to begin processing raw audio. Pro Podcast Solutions, the podcast production company she works with, manages the final digital editing, and she records narration to frame the interview.

“The Maine Conversation” aims for every conversation to have its own feel and flavor, Greenberg said, and discovering how each new episode unfolds is a highlight for her.

“It really is a slow, steady, and wonderful process,” she said.

Currently, Greenberg averages a new episode release per month. She hopes to work up to two. 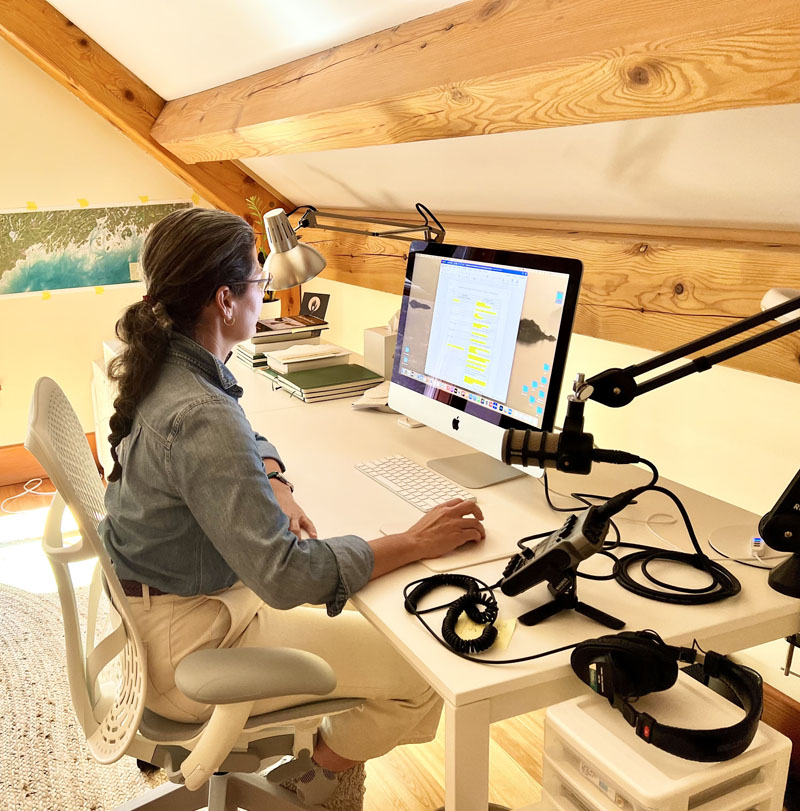 Emily Greenberg, host of “The Maine Conversation” podcast, edits an interview in her Bristol home studio. Nine episodes of the podcast were released in 2022, featuring conversations from across what Greenberg calls the “patchwork quilt” of Maine. (Photo courtesy Emily Greenberg)

Greenberg learned about making a podcast and even interviewing her guests from the ground up, but found the process natural and enjoys every part of it, she said.

She also enjoys sharing the final interview with her guests once her narrations have been recorded to frame the episode.

“It’s like they’re opening a present,” Greenberg said, “Like a gift I’m giving them, because they’ve given that gift to me.”

The Maine Conversation is focused on her guests, but Greenberg said the process is also reaffirming for her.

“The podcast has helped me see a lot of things about myself that I’ve just in the last few years started to really understand about myself. I’m seeing that come to life,” she said.

She has been surprised by consistent feedback from listeners that the podcast is an “oasis” for them, she said, offering reassurance and human connection without talk of politics or current events.

Her central reflection approaching the podcast’s first birthday is that “if you build it, they will come,” she said, referencing the film “Field of Dreams.”

Greenberg said that has been the gradual path of the podcast’s growth through word of mouth and natural development. “The Maine Conversation” has no advertising yet aside from posters in the windows of Midcoast businesses.

In her second year, she plans to continue her current trajectory, holding more conversations across the state and continuing to grow the podcast’s audience. Her last episode of 2022 was the first outside the Midcoast, a conversation with the Oshima Brothers band in Portland, who wrote the podcast’s theme song.

Greenberg has “big dreams” for “The Maine Conversation,” hoping one day to feature guests from all over the state and approach companies like L.L. Bean for sponsorship. She said there is no limit to the number of episodes possible to record, and she has no intent to stop.

A map of Maine hangs on the wall in her studio with red dot stickers to mark the places where she has held an interview. One day, she wants it to be completely red.

“If you have a vision and a dream, and it’s clear, and you stick to it, not only can you make something happen from an idea, but you can far surpass the expectations that you have,” Greenberg said.

“The Maine Conversation” is available on Spotify, Apple Podcasts, and Google Podcasts. For more information, go to themaineconversation.com or find the podcast on Instagram.