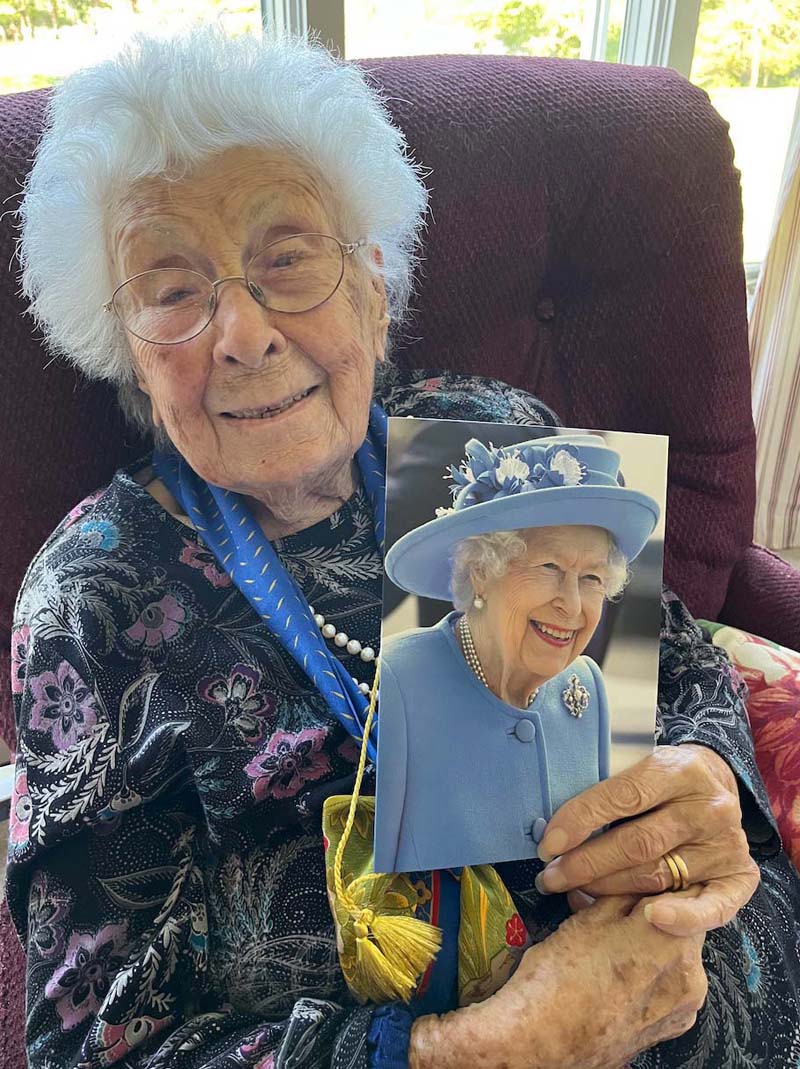 On Thursday, Sept. 8, the day Queen Elizabeth II of England died, Gladys “Bobbie” Selverstone received a personalized and signed birthday card from her majesty, wishing her well on her 100th birthday.

After she read the card, her daughter Jane Selverstone had to deliver the sad news to Bobbie that the monarch who reigned for much of the Scotland native’s life was dead.

“I liked this lady very much and I was more than horrified when I heard that she died,” Bobbie said during an interview with her, Jane, and her son, Andrew at her home on Lewis Point in Damariscotta on Tuesday, Sept. 13.

The 100th birthday card is a standard practice for the monarchy in the United Kingdom, Jane said. Jane said Bobbie was “over the moon” when she received the card that has a picture of Queen Elizabeth II on the front. The card is personally signed by the queen and says “I send my congratulations and best wishes to you on such a special occasion.”

Bobbie celebrated her 100th birthday on Sunday, Sept. 11, when about 20 people came from New Zealand, Minnesota, Colorado, and New Mexico, as well as locally, to wish her well. She also received greetings from across the pond, Jane said.

Bobbie was born in Ayr, Scotland in 1922. Her family left for the London area when she was 6 years old. Her father was English and her mother was Irish, Jane said.

After joining the Royal Air Force in 1940, she earned the nickname “Bobbie” because there were too many women with the name Gladys in her unit, Jane said. Bobbie ended up in the hospital with pleurisy, a condition that causes inflammation of the tissue that lines the lungs and chest wall, according to the Mayo Clinic.

After her discharge from the military, Bobbie worked for a prominent dentist, Freddie Warner, on Harley Street in London until she was married in 1951.

Jane explained how Bobbie endured the German bombing campaign against the United Kingdom in 1940 and 1941 known as “The Blitz.”

“She talks about these years all the time, dressing elegantly for work, rushing into the underground during air raids, etc.,” Jane said.

Bobbie and her boss joined the massive crowds on Victory in Europe Day on May 8, 1945 and ended up just outside the barricades at Buckingham Palace, Jane said.

Bobbie met her future husband, Norman Selverstone, at a party at the U.S. Embassy in London and the couple was married in 1951.

“Our mom’s roommate, they were having a party shortly thereafter and said ‘I feel so sorry for that lonely, miserable American, we should invite him,’” Jane said.

Norman had originally traveled to London after he was awarded a fellowship to study with renowned cardiologist John McMichael at Hammersmith Hospital.

In Landstuhl, Germany, Norman served as chief of cardiology at the 320th General Hospital for U.S. Army for two years.

The couple then moved to Norfolk, Va. in 1953, before settling in Cambridge, Mass. for the remainder of Norman’s career.

“They landed in Norfolk, Va. in the middle of July. It was apparently quite the culture shock coming from Britain,” Andrew Selverstone said.

Norman eventually opened a private practice in internal medicine with his brother Louis. He also worked at Mount Auburn Hospital and as assistant professor of clinical medicine at Harvard Medical School for nearly 50 years.

In Cambridge, Bobbie served as a traditional housewife until her children were out of school, Jane said. She then worked at and ran a high-end handcrafts shop, the Friends Gallery, for a few years.

“It was a really high-quality, high-end, handcrafts place,” Jane said.

Jane suspects this passion could have been instilled because of mandated rationing in the United Kingdom during and after World War II. The rationing did not end until 1954, nine years after the war ended.

“She learned to make everything and just use whatever was available,” Jane said.

Jane mentioned Bobbie’s stories about the joy of traveling to Paris from Germany during the rationing, where everything, like food and clothes, were available to them.

“The French knew how to do it,” Bobbie said.

The family has summered at a cottage in Chamberlain since 1959, when they would travel from Cambridge nearly every weekend and then spend most of August in Maine.

The couple’s third child, Roger Selverstone, lived in Maine for a time looking after Bobbie, but he died suddenly last year, Jane said.

Bobbie and Norman Selverstone moved to Maine permanently in 2009. Norman died in 2013.

“It’s been a good life for me,” Bobbie Selverstone said of her time in Maine. “Very nice people.”