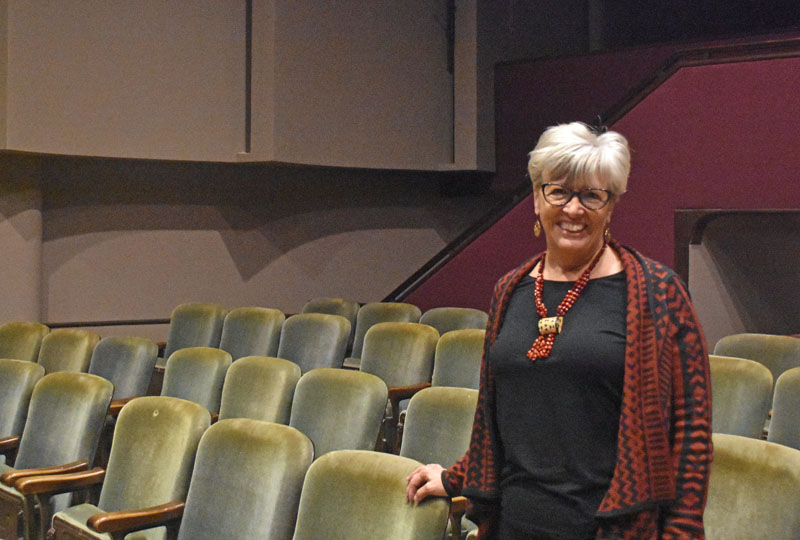 Susan Hodder marked the start of her “last great job” on Oct. 3 when she began her new position as executive director of The Waldo Theater. The former technology marketing executive, innkeeper, and florist’s manager from East Boothbay replaced Kate Fletcher, who departed in July of this year.

Hodder has been engaged in theater her entire life, she said, writing and directing her first play in the fifth grade. Her big break came two years later, when she was cast as the lead in a school production of “Oliver!” She went on to do “all the theater that there was to do” in high school, and stayed involved in community theater afterwards.

“I have a business vocation and a theatrical avocation,” she said, “and it’s been that way my whole life.”

Now, Hodder is applying her talents and passions together to chart a sustainable course for The Waldo, which has been revived several times in its 86-year history.

Hodder said she is spending her early days with the organization in “sponge mode,” listening and learning from others. She has met one-on-one with nearly three-quarters of The Waldo’s board, volunteers, and staff, with plans to speak to all of them.

“I’m finding out what their visions are, and what the history and challenges are,” Hodder said. She uses their input to “create a problem-solving mindset to address where we go from here.”

Hodder has great respect for but feels great sorrow about previous attempts to keep The Waldo operational, she said. This year is The Waldo’s first with a full program schedule since its most recent reopening.

Hodder believes her extensive experience in nonprofit management will help the theater ensure long-term viability. Part of her strategy is developing a combination of earned income from ticket sales and contributed income from grants and donations, she said.

Education and youth involvement is also important to Hodder, and she cited acting classes for elementary school students, family film events, and a vision of youth community productions as important pieces of the programming puzzle.

The theatre’s busy schedule of offerings includes films, traveling productions, touring musical artists, and the cult film series Waldo After Dark, along with gallery displays in the lobby.

In November alone, the theater has scheduled two musical acts, two art shows, a free family film, weekly After Dark movie screenings, and a community sing-along to “The Sound of Music.”

“We want to find out what appeals to the community and expose them to new things,” Hodder said.  “We’re not elitist or pretentious; (Waldoboro is) not that kind of community.”

“We want to be a community center, resource, and anchor, part of the rekindling of downtown Waldoboro,” Hodder said.

Hodder envisions The Waldo becoming a community fixture for the Midcoast as a whole. She said the theater saw visitors from Portland and Camden for some music events this summer.

As she continues to learn and meet with members, Hodder intends to spend the winter aggressively pursuing a diverse range of programs for the 2023-24 season.

She said that in her first weeks at the Waldo she has been impressed by the original design, renovations, and technology in the performance space, calling it “a wonderful place to be.”

While giving a tour, Hodder described the energy in the building as “glorious.”

“The lights go down, the pulse goes up,” she said.