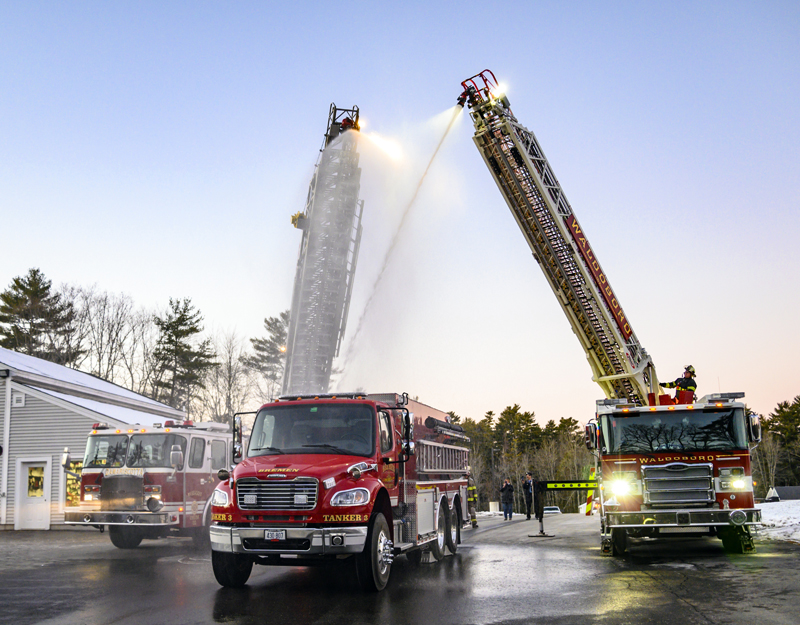 Damariscotta and Waldoboro ladder trucks perform a wetdown ceremony to welcome Bremen’s new fire truck into service in Damariscotta on Tuesday, Dec. 20. The tradition dates back to the late 1800s when firefighters washed the horses and firefighting apparatus after a fire. (Bisi Cameron Yee photo)

The Bremen Fire Department dedicated its new truck to late Chief Donald “Donnie” Leeman with a traditional wetdown ceremony the afternoon of Tuesday, Dec. 20. Leeman, who died unexpectedly on Sept. 17, was instrumental in obtaining the custom pumper/tanker for the department.

Firefighters and emergency workers from departments across Lincoln County joined Leeman’s family and the Bremen community at Colby & Gale Inc. at Biscay Road, where Leeman worked for the last 10 years, to witness ladder trucks from Damariscotta and Waldoboro departments welcome the truck into service.

“With this ceremony we honor our past and we celebrate our future with the Bremen Volunteer Fire Department,” Waldoboro Fire Chief Paul Smeltzer said during the event.

Smeltzer spoke briefly about Leeman’s history of service, both to his country as a Marine who fought in the Gulf War and to his community over the course of 40 years.

“His greatest joy was being a volunteer firefighter for numerous departments within Lincoln County,” Smeltzer said. “He held many ranks but had the ultimate honor of being asked to become the chief of the Bremen Volunteer Fire Department. The town of Bremen … the Bremen Fire Department (is) honored to dedicate this new engine in his memory.”

According to Smeltzer, the wetdown ceremony dates back to the late 1800s when fire departments still used horses to pull fire apparatus to fires. After the fire was extinguished the crew would wash and ready the horses and apparatus in preparation for the next call.

In another nod to tradition, Bremen firefighter Larry Smith ceremonially placed a fire axe as the first piece of equipment on the truck.

Char Corbett, chaplain for the Bremen Fire Department, read a blessing to the crowd.

“We … remember our own Bremen Fire Chief Donnie Leeman who is no longer with us in this earthly lifetime, but whose efforts and devotion to the Bremen Fire Department made it possible for this truck to become part of our firehouse,” she said before inviting the crowd to come forward and place their hands on the truck as she doused the front of the truck with scoops of water and blessed each part of the vehicle.

“With this water, we offer our gratitude for this truck, the Bremen Volunteer Fire Department, the entire company of fire departments sharing in mutual aid and the communities our firefighters serve,” Corbett said.

After the blessing the crowd moved back and sheets of water enveloped the truck.

Leeman’s wife, Liz Leeman, said she was overwhelmed by the love and support from the community.

Donnie Leeman’s brother, Martin, appreciated the turnout from the community.

“(Donnie) touched a lot of people,” he said.

Donnie Leeman’s brother, Daryl, a lieutenant with Jefferson Fire and Rescue, said the dedication on both sides of the truck was a nice touch.

Bremen Fire Chief Bruce Poland praised the truck that Donnie Leeman designed, noting that firefighters can now pump 3,000 gallons of water directly from the truck unlike the previous tanker, which while it also held 3,000 gallons, was unable to pump directly onto a fire.

“Donnie made sure the truck had everything the department wanted, right from the chassis up,” Poland said.

“Donnie got a good deal, saved the town a lot of money.” said longtime Bremen firefighter Hank Nevins, who pointed out the cost of the truck has increased from $335,000 to $390,000 since it was purchased.

Smith went to the Minnesota facility to train with the new truck and recalled walking in and seeing it in the showroom.

“It was the only one, front and center, like a light (was) shining on it,” Smith said.

Bremen firefighter Bruce Johnston said the new truck will make a huge difference to the department calling it “a tremendous improvement over what we had.” He said the truck is much more versatile with a built in pump and the ability to carry ladders.

“We can use it as a fire attack vehicle as well as a tanker,” he said. This is Donnie’s truck, no question.”