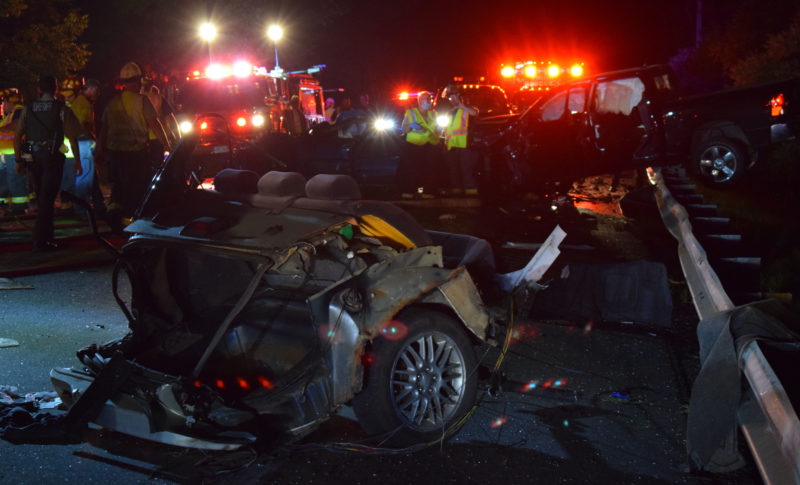 Emergency personnel work at the scene of a head-on collision between a pickup truck and a sedan on Route 17 in Jefferson late Friday, Aug. 14. The occupants of the car, a man and woman from Thomaston, died in the crash. (Evan Houk photo)

Robert E. Crowe, 55, of Thomaston, was driving a 2004 Subaru Legacy sedan west on Route 17 at the time of the crash, according to Lincoln County Sheriff’s Office Lt. Brendan Kane. Jacob B. Stevenson, 25, of Damariscotta, was driving a 2019 Ram pickup truck east.

Crowe crossed the centerline into the path of the Stevenson vehicle and the vehicles collided, according to a press release from the sheriff’s office, which cites the results of a preliminary investigation. Crowe and his passenger, Hailey J. Robinson, 25, of Thomaston, died at the scene.

Green was flown by LifeFlight helicopter to Central Maine Medical Center in Lewiston, according to the press release. Stevenson was taken by Waldoboro Emergency Medical Services to LincolnHealth’s Miles Campus in Damariscotta.

Stevenson, Green, and Bowman were wearing seat belts and there was full air bag deployment in the truck, according to the press release.

The preliminary investigation indicated that speed was a factor in the collision, according to the press release. Kane said the Subaru is believed to have been speeding, but the investigation is ongoing.

Maine State Police is assisting with the crash reconstruction.