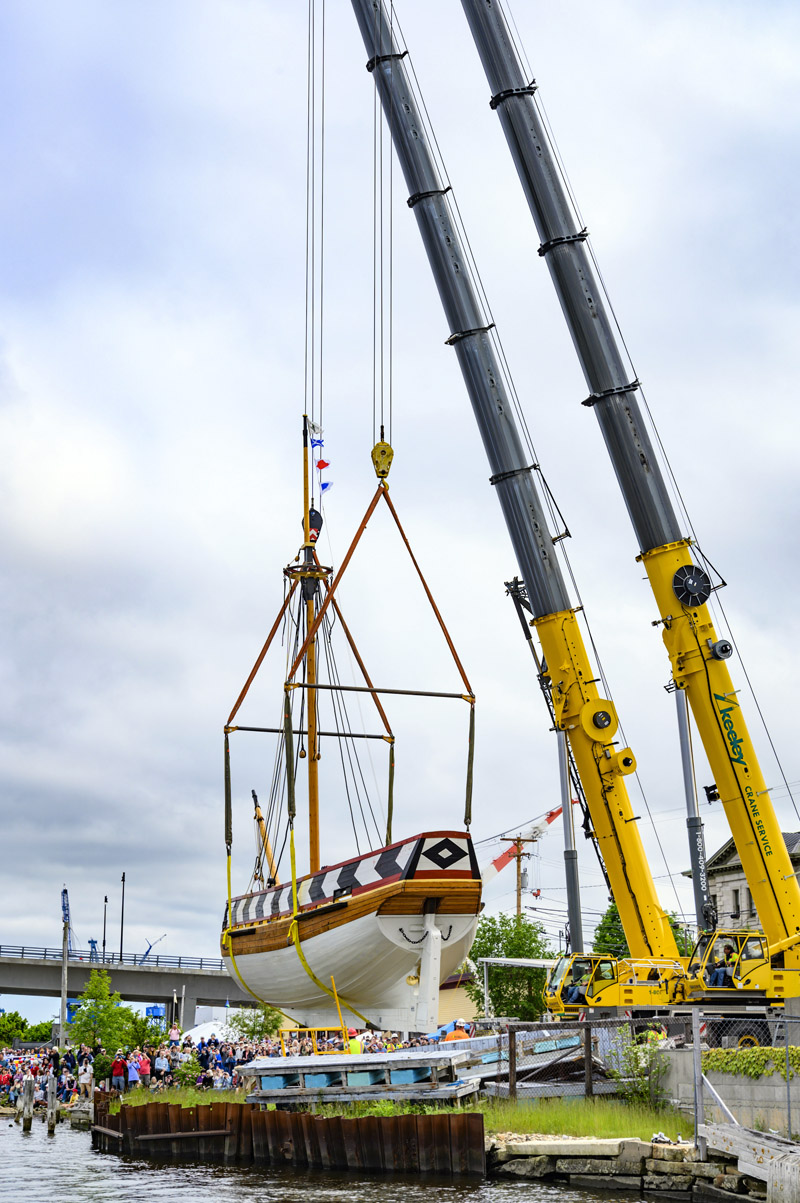 The Virginia hovers over the water as she is lifted from her resting place on the banks of the Kennebec River by two giant cranes in Bath on Saturday, June 4. She was set down in the river so gently that there was barely a splash when she touched the water. (Bisi Cameron Yee photo)

Maine’s First Ship was launched into the Kennebec River at 4:30 p.m. on Saturday, June 4, marking the culmination of more than a decade of labor to reconstruct the historic vessel.

Several thousand people gathered at the Bath Freight Shed and at Waterfront Park in Bath to watch as the Virginia was lowered into the river by two rough terrain Grove cranes, each one capable of lifting 150 tons.

Peter Frye, of Keeley Crane Service in South Portland, said two cranes were used to ensure the ship could be placed far enough out to reach deep water. The Virginia touched down in the water with barely a splash, and was guided to her new berth by a tugboat from New Harbor Marine Construction, out of Pemaquid.

The original Virginia, the first English ship built in North America, was constructed by the Popham Colony, which settled briefly near the mouth of the Kennebec River in 1607. In 1608, after facing a harsh winter, deteriorating relationships with local tribes, and dwindling stores, the colonists used the 30 ton pinnace they had built to sail back to England.

The reconstruction of the Virginia is based on minimal information: her name and estimated size; the knowledge that she made two crossings of the Atlantic; a small sketch found in documents related to the colony; and the identification of the colony’s shipwright, “Digby of London.”

From that information, volunteers extrapolated how Digby would have approached constructing the vessel. They used traditional methods and materials to design and build what the website for Maine’s First Ship calls “a single-deck, high-sided, shallow-draft, square-sterned hull” with a mast and a bowsprit.

Over the next several months volunteers will continue working to outfit the interior of the ship and to place the rigging. Once the Virginia has been certified by the Coast Guard, she will sail the Kennebec as a floating classroom, fulfilling another phase of her mission to immerse the public in an exploration of the region’s early history, craftsmanship, and relationships, and their impact on the community and environment today.

Festivities to celebrate the launch of the reconstruction started at noon with a salute from one of the ship’s guns. Reenactors portrayed key members of Popham Colony and described the challenges of sourcing materials and building a seaworthy vessel in 17th-century coastal Maine.

Speakers at the event included Maine’s First Ship Executive Director Kirstie Truluck, John Bear Mitchell, of the Wabanaki Center; Orman Hines, president of Maine’s First Ship; volunteers Jeremy Blaiklock and Jim Nelson, and Captain Scott Smith, who volunteered along with members of his naval crew, to help bring the dream of the Virginia to reality.

The Rev. Paula Mott, of Grace Episcopal Church in Bath, blessed the ship and Kelsey Brick, who has been involved with the Virginia since she was a student at Morse High School in Bath, christened her: “May the creator of the wind and the seas bless her and all who sail in her.”

For more information about Maine’s First Ship or to watch a video of the launch, go to mfship.org.