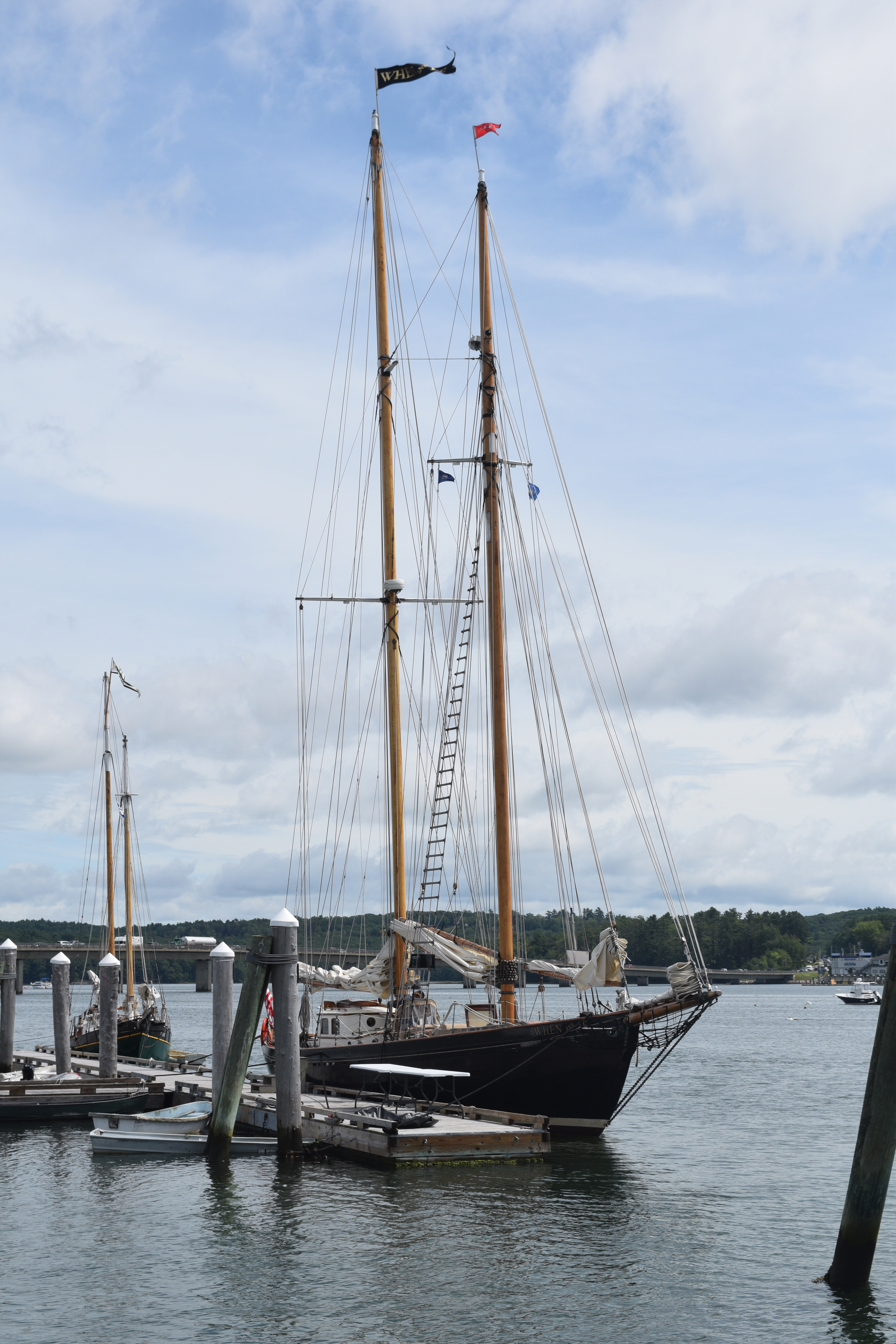 The When and If (foreground) and the Sycamore (background) docked at the community pier in Wiscasset on Friday, Aug. 20 for the first annual Schoonerfest. (Nate Poole photo)

Even as ominous clouds and mist rolled into the Wiscasset waterfront, forewarning tropical storm Henri’s grazing of the Midcoast, enthusiasts crowded upon visiting vessels, toured along the Sheepscot, and enjoyed performances and other festivities at the community pier in Wiscasset the night before Wiscasset’s Schoonerfest came to a close.

On the evening of Aug. 21, co-chair Peter Wells described the event as a success, estimating that as many as 250 to 300 individuals attended some portion of the activities on each of the five days.

While the weather was only cooperative in fits and starts, Wells said that the crowds made the best of it.

“It was hopping here last night, even in the rain people were dancing all over the place. It was a good time,” Wells said at the pier on Friday, Aug. 20.

Wells said that he and the rest of the volunteers made an effort to interview as many attendees as they could and at least a third of them had never heard about the event before and simply stopped because they saw signs.

The Schoonerfest Committee set up entertainment at the common and the Sunken Garden across the village in an effort to lure those visitors who usually drive straight through the town to walk through the village and peruse local shops.

While the Schoonerfest webpage advertised five days of street performance, music, scavenger hunts, food, and races, organizers did not anticipate the characters that would be attracted to such a celebration of the town’s nautical history. Two of them were Fred and Mary Bowers.

A semi-retired farrier by trade, Fred Bowers spent 15 years building the Sycamore, a steel representation of a mid 19th-century Pinky Schooner fishing vessel. Not to mention he did it in his backyard in Alna.

While the Bowers weren’t taking anyone out on the water like the When and If crew, Fred was ready and willing to talk shop at a moment’s notice with a curious passerby. If anyone at the event was equipped to explain just what exactly a schooner is, it was Fred Bowers.

For the record, a generic schooner is a boat with two masts, one mast smaller than the other, with the lower mast gaff-rigged. However, Fred explained that some schooners traveling to the Maine coast in the 19th century could have as many as seven masts to increase their capacity. Two such vessels were the Hesper and the Luther Little, which each had four masts.

Fred explained that he chose to model his own boat after a Pinky Schooner because it is known for being a particularly safe and resilient kind of boat, so much so that Maine fishermen used to brave the Gulf of Saint Lawrence in the dead of winter with them.

While the story behind Sycamore is inspiring in many ways, the gem of the festival was the boat moored next to it, the When and If. With a crew of five, including a poodle named Leilani, captained by Jack Maher, attendees had the opportunity to take 90-minute to two-hour trips along the Sheepscot on the historic vessel.

The 65-foot, two-masted schooner was built in Wiscasset in 1939 for Gen. George Patton, and, as far as its crew knew, it hadn’t returned to its birthplace ever since.

Usually moored in Salem, Mass., or Key West, Fla., in the winter, the crew said that every spare moment away from a dock was spent varnishing, cleaning, scrubbing, polishing, and generally making the boat look beautiful.

Crew member Sean Salzmann said that oftentimes when the crew is moored in places like Key West it becomes something of a hospitality business as the crew takes on the dual responsibility of serving drinks. He was pleased to have the opportunity to focus on sailing and interpreting the vessels history for patrons.

Another set of remarkable characters in attendance at the event were Laurie Riley and her family, who used to live in Wiscasset and traveled from as far as Colorado and New York to, of all things, sell posters.

One poster, titled “The Anatomy of a Full-Rigged Vessel,” features a diagram of a ship with a key listing a variety of fake, absurd names for the different parts of the rigging. Highlights include “flog-narts,” “bun-snaffles,” and “furt-nellies.”

Another poster features a black and white photo of the Hesper and the Luther Little taken by Riley in 1975.

Riley used to own a poster business in Wiscasset with her husband, George, who has since passed. Riley’s son, Colin, first heard about the event years ago and planned on attending ever since.

Riley said that her photo already inspired many patrons to come up to her tent and talk to the family about their own memories of the iconic ships.

“Most people want to come by and share their experience,” Riley said.

With a trove of posters yet to sell, Colin said that the family is already planning on attending next year’s Schoonerfest.

In addition to Water Street Kitchen and Bar’s wine and beer garden, the evening’s aromas and cuisine were courtesy of Mike and Linda Raven, who served up smoked meats from Grandpa’s Kitchen out of Pittsfield, as well as Wiscasset’s own local oyster trailer, Brother Shucker.

Behind all of the Saturday night festivities was a maritime soundtrack set by The Oystermen, with Carter Newell on fiddle, Smokey McKeen on accordion and guitar, and Eric Rolfson on bass and mandolin.

Asked if he had any plans for next year on the same evening, Wells patted his binder and said that he already had three pages of notes ready for the committee.