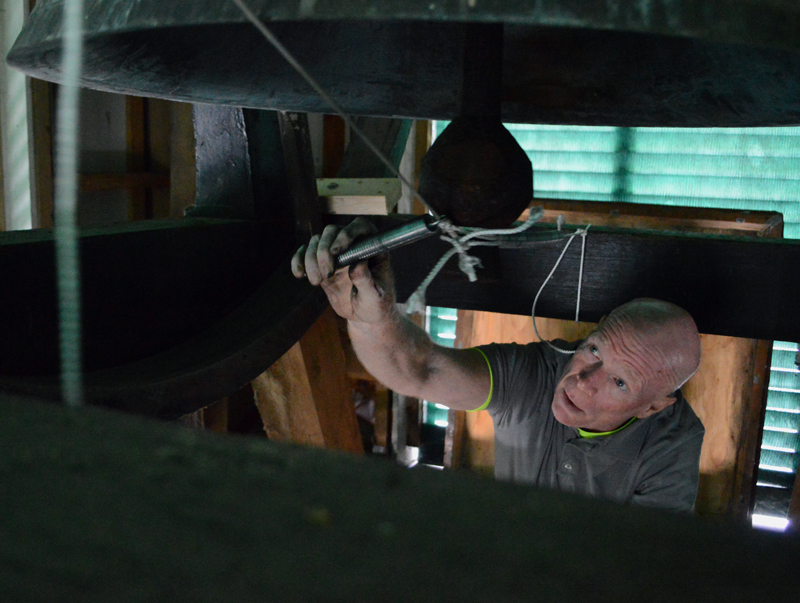 Rob Gregory adjusts the tension on the pulley system he devised that will allow the manual ringing of the bell at Damariscotta Baptist Church to continue, despite the installation of automatic controls. (Evan Houk photo)

After nearly 135 years of manual winding by volunteers, the town clock and 900-pound bell inside the steeple of the Damariscotta Baptist Church have new automatic controls.

A set of three programmable atomic clocks and small motors inside the clock tower will control new hands on the clock faces, as well as the ringing of the bell.

Damariscotta attorney Rob Gregory has been responsible for winding the clock since 2012 and contributed to the cost of the new system. Although the town owns the clock and bell, private funds will cover the entire bill for automation.

The new system includes three atomic clocks, affixed to the inside wall of each of the clock’s three faces, as well as a hard-wired internet connection that keeps the clocks synchronized to international atomic time.

Known for their accuracy, atomic clocks depend for their precision on the constant frequency at which atoms or molecules of certain substances absorb or emit electromagnetic radiation.

A new metal striker that is tied in to the atomic clocks was installed on one side of the 173-year-old bell.

The system has been programmed to ring every hour with the appropriate number of chimes and once every half-hour. A pealing call to worship has been set to ring for one minute each week, at 10:15 a.m. Sunday, ahead of the church’s 10:30 service.

At the appointed times, an electrical impulse is sent up to the striker that rings the bell.

Gregory said the system can be easily reprogrammed to ring any time the town or church desires. A control panel with a keypad is installed in a maintenance closet directly beneath the clock tower.

The unit includes a remote control that allows a user to manually trigger the system to ring the bell in different ways for different occasions, all with the push of a button.

For example, there is a “toll” setting to signal a funeral, a “peal” setting for wedding bells, and a “swing” setting that makes it sound as if the bell is swinging and ringing in the traditional way, complete with a slight echo.

The “swing” sound is slightly different from the way the bell rings with the new striker, as the bell used to swing back and forth and now sounds when struck from the outside by the metal striker.

Before last week’s automation, Gregory had to climb into the steeple every seven days to manually wind the clock and bell-ringing mechanisms, two separate and strenuous procedures.

Just to reach the clock, one must climb up two staircases – one almost completely vertical – and tread carefully over some attic insulation into the main clock room. Another shorter and less steep climb and the opening of a heavy hatch brings one into the bell room, right below the crowning spire and weathervane, which reaches 126 feet in the air.

When wound, the pulley system would lift a heavy bale filled with rocks and metal weights 25 feet into the air. There are two bales, one for the bell and one for the clock.

The clock bale would descend with the passage of time, almost exactly seven days, while the bell bale completely descended after about eight days. 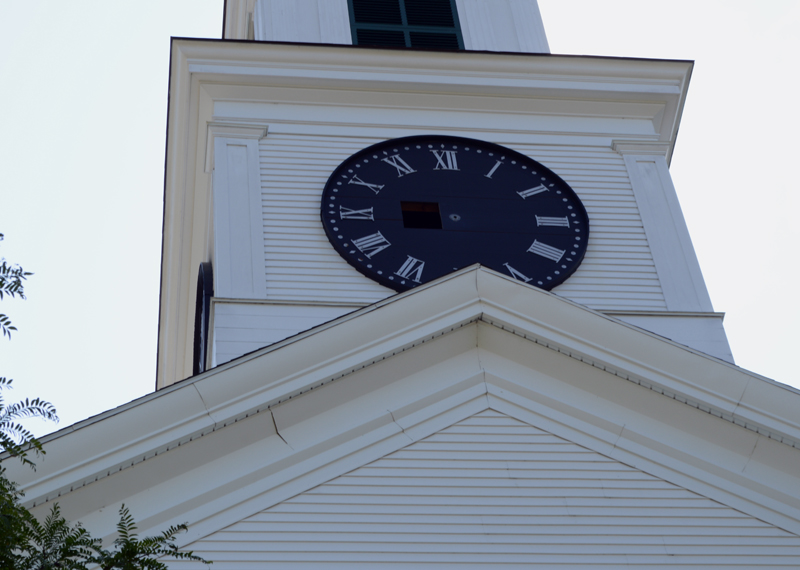 According to Gregory, the bales presented a safety risk.

“Safety considerations are moving many of these mechanical clocks in this direction as the traveling bales of rocks and metal weights (do) have some risk if there were a cable snap,” Gregory said in an email to church and town officials.

Now that they are no longer necessary, the bales are resting peacefully on a solid platform in the clock tower.

Gregory addressed the importance to the Damariscotta townspeople of the town clock, and said it usually goes unnoticed until it stops working.

“I think everyone can agree (on the importance) of having a central bell with a sound that marks the passage of time, that marks a funeral, that marks a wedding, that marks an event like Sept. 11 … when I came and opened the door and allowed people to come and (ring the bell),” Gregory said as he pulled the rope that manually rings the bell.

Gregory took over the clock-winding duties after the death of John Andrews, a lifelong Damariscotta resident who wound the clock religiously for 30 years until his death in 2012.

According to reports, Andrews’ dedication was such that he would make the long, steep climb into the clock tower twice a year in the dead of night to adjust the clock for daylight savings time at the appointed hour of 2 a.m.

Gregory, who was the executor of Andrews’ estate, said it made sense for him to volunteer for the duty, since his office is right across the street, where he can periodically check the clock to make sure the time is correct and everything is working properly.

The ability to physically ring the bell with the pull of a rope was almost eliminated with the upgrade, until Gregory came up with an innovative solution.

Gregory said in the email to church and town officials that the bell had to be immobilized as part of the automation, so the new striker would not crack the bell by repeatedly hitting it at an improper angle.

This would have taken away the ability to ring the bell from the church entryway by pulling the rope at the bottom of the stairs to manipulate the bell.

However, Gregory did not want to see this feature eliminated, so he devised a new pulley system where the rope pulls the original clapper inside the bell to ring it, rather than swinging the bell like it previously did.

He said the manual ringing is a nice feature to have, especially for young children at a wedding who get a kick out of ringing the bell.

Gregory also said in the email that, should anyone in the future want to “reverse the curse,” all the old mechanisms are still in place and can be restored to working order without much difficulty. 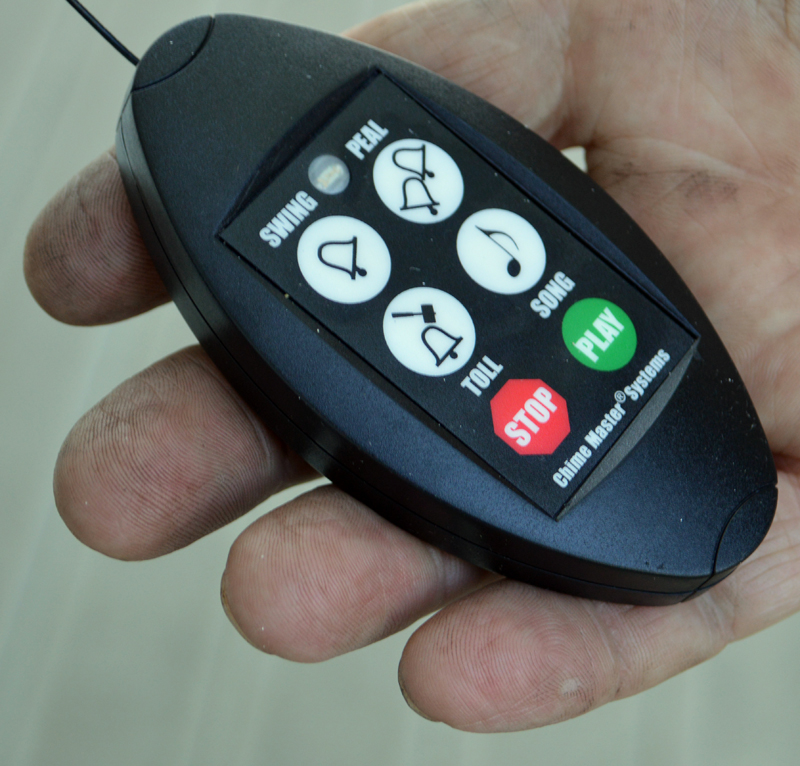 Rob Gregory displays the new remote control for the bell at Damariscotta Baptist Church. The remote offers multiple options for the ringing of the bell. (Evan Houk photo)

He said that if the power goes out, the atomic clocks’ internal memory will restore the correct time when electricity returns.

“It may take a few hours for the clock to speed up to make up lost time, but it will happen,” Gregory wrote.

He thanked Richard Bartley in the email for his “good work over the years” and wrote that it is bittersweet for him and Richard to give up their clock-winding duties.

Bartley lives near the church, on Water Street, and has helped maintain the clock over the last 10 years. He also designed and built a “halo” over the clock “so that it could be separated from the wooden structure as it was shrinking after the construction of the new wooden tower,” Gregory said in an email.

Gregory said that although he is somewhat sad to see the elimination of the “beautiful” mechanical process that previously kept the clock ticking, he will ultimately miss the challenges that came with it “like you would miss a headache.”

“What would sometimes happen is, if the wind was howling and pushing against these minute hands, that would stop the clock ticking,” Gregory said.

The clock tower and its bell have a long history.

Dick McLean, a former member of the Damariscotta Board of Selectmen who lives near the church, believes the clock was originally installed in 1848, when the Ladies Basket Society, an auxiliary of The Second Congregational Church in Newcastle, raised funds to buy the clock and gift it to the town.

According to a 2010 article in The Lincoln County News, enough was raised to buy the clock from George M. Stevens, a Boston clockmaker. The Glidden family paid almost half of the $423.37 cost for the clock and its installation.

The bell was cast in 1846 by G.H. Holbrook in his foundry in Medway, Mass.

The entire steeple atop the clock tower was removed, repaired, and lifted back into place in August 2010 after a three-year fundraising campaign managed to gather the $500,000 necessary to complete the job.

McLean said Pam Gormley, former executive director at Skidompha Library, offered to house the clock system in the library for safekeeping and public display during the time it took to raise the funds and repair and replace the steeple.

The town now has a town clock capital reserve fund with a balance of $10,736, plus any recent interest earnings. Town Manager Matt Lutkus described it as a contingency account for repairs and maintenance.