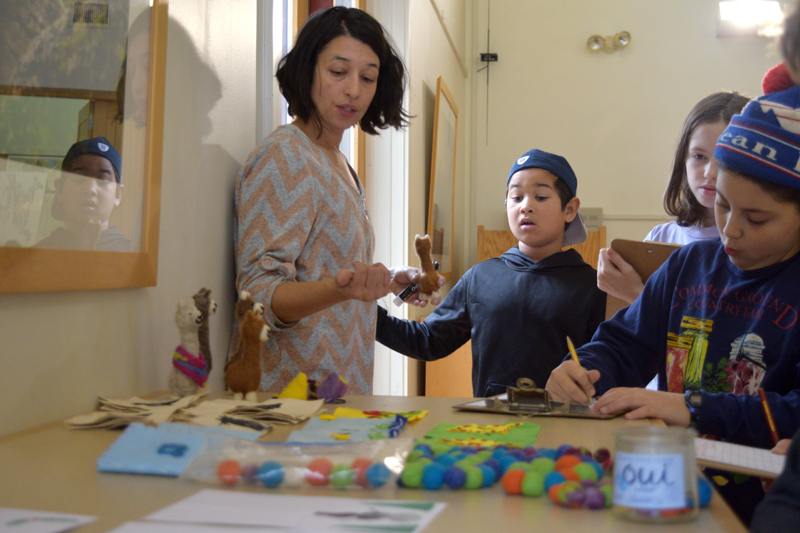 From left: Coreysha Stone, visual arts specialist at the Elementary School at Chewonki, and students Julien King, Ella Seymour, and Lilly Mae Awamleh inventory the goods they will sell at the craft fair. (Jessica Clifford photo)

Thirteen small businesses will open in Wiscasset on Tuesday, Dec. 11 – each owned and run by an entrepreneur no older than 12.

Since September, students in grades four through six at the Elementary School at Chewonki have applied their studies of various academic subjects to the development of their own small crafting businesses.

The businesses, which make and sell handmade products, will debut at the Chewonki Craft Fair on Tuesday, Dec. 11.

“This is academic choice in a really big way,” said Katherine Cassidy, head of the Elementary School at Chewonki and one of two teachers for grades four through six.

Cassidy is working with Emily Bell-Hoerth, the other teacher for the three grades, on the project.

The Elementary School at Chewonki, established in 2015, is a place-based independent elementary program with mixed-age classes for grades three to eight. A place-based program engages students in local culture, environment, and heritage.

The business project is part of an academic unit called Economy and Ecology. Students have learned about the Maine economy and the ecology of Chewonki’s farm, among other topics.

From a report by the Island Institute, students learned that 14 percent of Maine’s workforce is self-employed – 1 percent more than the U.S. average.

Students learned about supply and demand, inventory, budgeting, and interest rates. On the ecology side, they learned about the origin of the wool they used for crafts.

Students learned a little economic history too: about the Great Depression, the Dust Bowl, and Hoovervilles, which were shantytowns built in that era.

It’s important for students to learn about economy and ecology at a young age, Cassidy said. With the craft fair coming up, the teachers were looking for a fun way to tie the subjects together.

Cassidy said she asked herself the question: “If I was a kid, what would I want to be doing with my time?”

The Chewonki Craft Fair is in its 11th year, but this is the first year students will be a major part of it, Cassidy said.

At the outset of the project, students had to choose a product they wanted to sell with guidance from Coreysha Stone, the school’s visual arts specialist. Students had undergone a “fiber arts boot camp” in October, Stone said.

“The idea was that they would have all these basic skills to then choose something of their own design that they could sell and market that was of high quality,” Stone said.

To gain approval for their craft ideas, students had to answer questions about how the product would be used, the demand for it, and the materials required to make it.

Students will come up with their own business names and logos before the craft fair.

“A lot of my previous ideas really didn’t work,” said Julien King, who is making cozies. He said the other techniques he wanted to use were too time-consuming.

Cassidy said students grappled with supply and demand. Many students had to decide how to make their projects different from others to ensure a diverse selection of products at the fair.

“What if we all wanted to make ornaments? Then our supply-and-demand situation is going to be a disaster and we are competing with each other in a not-useful manner because ultimately we want to help each other succeed,” Cassidy said.

The 13 students went on a shopping expedition to Joann Fabrics and Craft Stores and Halcyon Yarn to research how much it would cost to create their crafts.

In addition, students spoke with crafters at the Markings Gallery in Bath and the Common Ground Country Fair in Unity. After attending the fair, the students analyzed the fair’s finances.

To purchase their materials, Cassidy said, the school gave each student a $20 loan from “The Bank of Chewonki.” Students must repay the loan with the proceeds from the sale of their crafts.

In November, students began making their crafts, which include felt journals, wool alpaca figurines, earrings made of rice paper and wire, and cloth catnip pouches.

“For children of this age to be making this quality of craft, I think, is really awesome,” Cassidy said.

Students also determined the amount of money they would need to sell their products for in order to account for their time and the cost of the materials.

Fifty percent of each student’s profit will go to a nonprofit. “This is a giving situation,” Cassidy said.

Students, by ranked-choice voting, chose which organization their money would go to. The votes were close. Cassidy said the funds will go to the Good Shepherd Food Bank, Midcoast Humane Society, or both.

Though the students have yet to complete the project, many said crafting has been their favorite part so far.

“I also liked figuring out all our prices and what all our products are actually worth,” Harriet McKane said.

On the day of the fair, students will sell their products among local artisans. The fair will take place at the Elementary School at Chewonki, 485 Chewonki Neck Road, Wiscasset, from 1-5 p.m., Tuesday, Dec. 11.

Cassidy said that in addition to the craft fair, most students are also participating in the online Chewonki Holiday Auction. All the proceeds from the auction go to financial aid for Chewonki students. For more information or to bid, go to store.chewonki.org/holiday-auction-2.