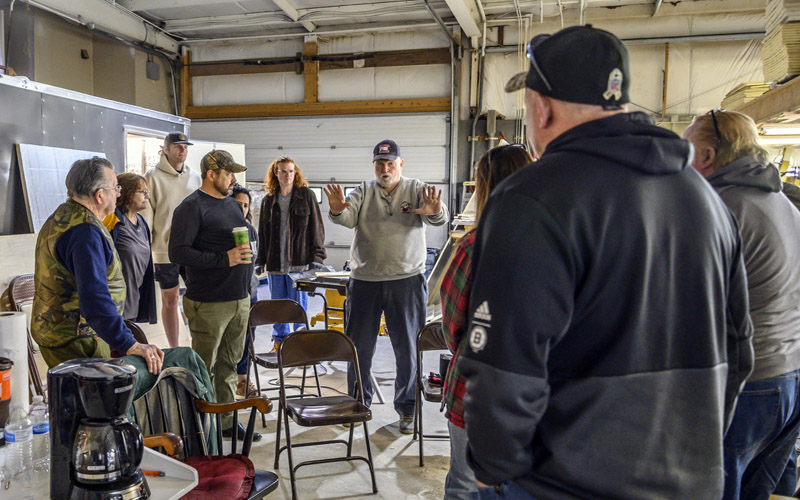 Ed Harmon (center), founder of Boothbay V.E.T.S, gives volunteers from the Togus Regional Office the lay of the land during a work session to build trailers for homeless veterans in Boothbay on April 30. Togus is a medical facility operated by the U.S. Department of Veterans Affairs in Chelsea. (Bisi Cameron Yee photo)

Boothbay V.E.T.S. founder Ed Harmon gave a brief introduction to the day’s plan then pointed the volunteers toward the waiting trailers. “Let’s have fun. Pair up. We’ll give you a drill bit. We’ll give you a screwdriver,” he said.

This is not the first work party held at Boothbay V.E.T.S.  headquarters on Route 27 and not the first time Togus volunteers have helped. The informal partnership between the two organizations has provided benefits to both. But the most important benefit will be four more veterans who won’t have to face the extremes of Maine weather, four more veterans with a roof over their heads and a warm bed to sleep in.

Boothbay V.E.T.S., or Boothbay Veterans’ Emergency Temporary Shelters, is the brainchild of Harmon, a Vietnam veteran who refused to accept that Maine’s homeless vets could not be sheltered. “I’m a believer there’s always a solution to any problem,” he said. So he drew up the plans and built a prototype with his own money.

The trailers provide for most of the vital needs that shelter provides: heat, light, a bed, a microwave, a door that locks. Even a commode that can handle up to 70 flushes. The one big thing it’s missing is running water. Harmon said it gets too cold in Maine for them to provide that additional service affordably.

Even without water, Harmon said he has service members who have lived in the trailers for as long as 20 months. Between the pandemic and the real estate crunch in Maine he thinks the chances for permanent housing are slimmer than ever, and the need for the retrofitted trailers even greater.

Jennifer Bover, director of the Togus Regional Office since December 2020, said this was the second time that Togus volunteers have come down to help with the builds. “All our employees at the regional office have volunteered,” she said.

Additionally, since the two organizations have been working together, Togus has placed two veterans through referrals into the trailers that otherwise wouldn’t have had a home in the cold Maine winters, Bover said.

Bover is a believer in a holistic approach. “It really takes an entire community and a bunch of diverse services to ensure that homeless veterans are able to reintegrate into society.”

She recognizes that some of the older veterans in particular can be distrusting and she wants to change the relationship. “We’ve immersed ourselves in the community so all veterans can see that we’re extremely approachable, that we are here, we are ready to help,” she said.

Harmon and the staff at Togus believe that the trailers represent a viable solution to combat veteran homelessness. The cost of electricity is minimal and the cost of propane is approximately $3-$4 per day, according to Harmon, much lower than the average hotel room.

Additionally, some veterans don’t qualify for traditional homeless options like hotels and shelters: they may have a pet or a criminal record. They may not have easy access to proof of their veteran status. “There are all sorts of little intricate things that can prevent vets from getting into temporary housing,” said Patten.

There are six trailers currently in service and seven more ready to go. Boothbay V.E.T.S has built four so far this year, and is working on four more, with another two on order.

The biggest need is locations to put the trailers.

“The Department of Benefits at Togus has been doing a great job finding places for the trailers to be plugged in,” Harmon said. Local case workers are also scouting locations. But many of the places that are interested impose 30 day limits on habitation. With the current housing crunch, that requirement feels out of touch to Harmon.

The trailers have been seen by U.S. Sens. Susan Collins and Angus King at the Disabled American Veterans conference in Waterville in April. Harmon has been invited to the upcoming New Hampshire and Rhode Island conferences to talk about the trailers. And he’ll speak at the national VFW convention in Kansas City in July.

According to the most current statistics provided by Patten, Maine has roughly 105,000 veterans making up about 9% of the state population. Approximately 15,000 are veterans who served in wars after Sept. 11, 2001 and about 41,000 are Vietnam-era veterans. Approximately 6% live in poverty and 115 are homeless. There is no data on how many homeless veterans who may be living off the grid, but Harmon thinks it could be double.

On average it takes 232 days to house a homeless veteran.

“To put a trailer together well enough to get people through a cold Maine winter is just unbelievable,” Patten said. “This is something unique. Not just unique in Maine – unique in the nation. I think it can work.”

For more information, go to boothbayvets.weebly.com.