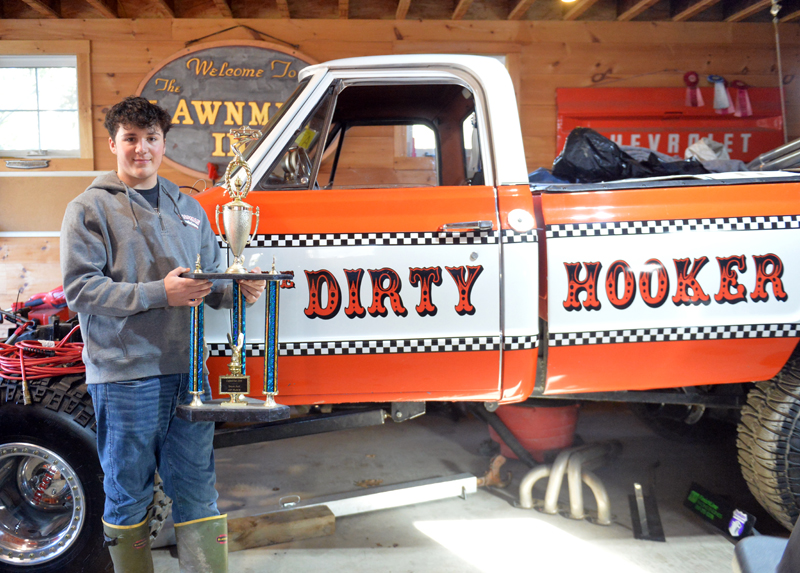 Fifteen-year-old Sam Chapman, of Jefferson, won the Maine State Truck and Tractor Pull Association’s Point Series with the Dirty Hooker in the 4×4 Super Stock division. He started truck pulling in 2021 as a 14-year-old to become the youngest participant in the event. (Paula Roberts photo)

Sammy Chapman does not have a driver’s license, but that hasn’t stopped the 15-year-old Jefferson youth from tearing up the dirt track in truck pulling.

He won 12 races this past summer, including 10 in a row, to win the Maine State Truck and Tractor Pullers Association’s points series. He is the youngest puller in the truck class and has beaten out many a seasoned veteran.

Truck pulling is in Sammy’s blood, as he has helped out around the shop and watched his father pull since he was a baby. The young man is a third generation truck puller, following in the footsteps of his grandfather John Chapman, of Nobleboro, and his father Derek.

Sammy drives his father’s truck “Dirty Hooker,” which got its name because it hooks onto a mechanical drag and pulls it on a dirt track.

Sammy’s grandfather John Chapman started pulling trucks in the 1980s, along with a core group of Lincoln County men, including Jimmy Beverage, Nick DePatsy, Barry Miller, Solomon Orff, and Jimmy Hall. Their first pulls were conducted on the Gordon Libby property at the top of the hill on Route 1 in Waldoboro.

“It was before mechanical drags,” Derek said.

“They used stone drags” similar to what was being used in oxen and horse pulling, Sammy added.

Of the core group, Hall, Miller, and Chapman continued truck pulling for quite a few years. Sammy’s grandmother, Terry Chapman, even got involved with pulling in the Powder Puff women’s class.

“Now their kids and grandkids are pulling for a third generation,” Derek said.

When Sammy straps himself into the Dirty Hooker, the 1,000-horsepower engine roars to life under the hood. The sheer power reverberates through its chassis, and when the lights turn green, the truck muscles to life with a tremendous roar. The truck shakes and rattles down the track with dirt flying in all directions, before the drag moves forward and stops the truck dead in its tracks.

The engine was built by Bob Stevens’ Finish Line Racing out of Chelsea. 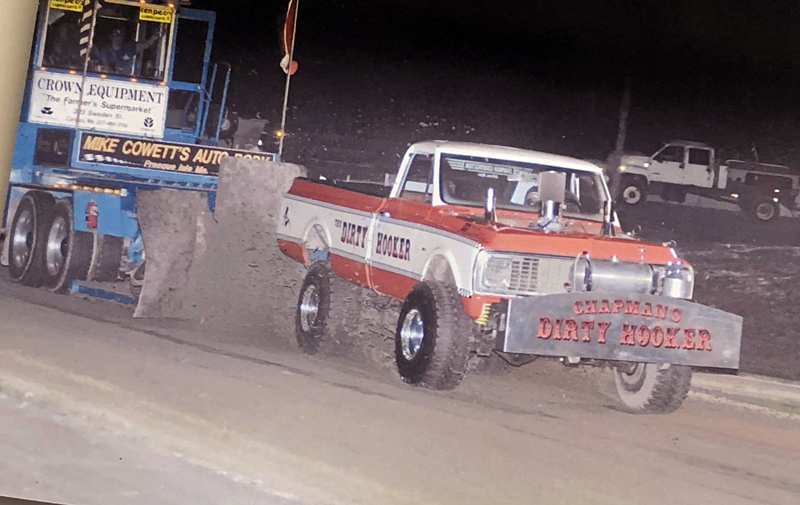 In 2021, Sammy, then 14, got his first chance to pull with the Dirty Hooker. At a meet at Springfield Fair, Derek asked a Maine State Truck and Tractor Pullers Association official if his son Sammy would be allowed to pull in 2022, when he had his driver’s permit. The official asked Derek if Sammy could drive, when Derek responded yes, the official said Sammy could pull that day.

Sammy said he did not pull at Springfield because he was “too nervous,” but went on to compete at the next pull, and ended up taking six first place finishes in his maiden season, along with a handful of seconds and thirds.

“I was a little nervous the first time, then it got easier after that,” Sammy said.

At age 14, he became the youngest to pull in competition on the Maine circuit.

“It is different than anything else I’ve done. The fun part is just pulling. It is an adrenaline rush,” Sammy said of a 15-second pull.

“It is a lot of work and money for 15 seconds of fun. I still get butterflies,” Derek added.

Typically the mechanical drag is set up to pull a maximum of 300 feet. Sammy’s longest pull was 350 feet at Fryeburg, where he pulled last and beat the nearest competitor by 12 feet.

“The Fryeburg crowd really gets into it, same as at Skowhegan,” Derek said of the cheering Sammy received after blowing away the competition in his last event of the season.

Both father and son said the truck pullers are a “good community.” During one pull his first year at Cumberland, the clutch exploded on the Dirty Hooker while Sammy was driving.

“Alls we saw was this big black cloud of smoke. His face was covered in black clutch dust. That was a little scary,” Derek said.

“It was hard to breathe,” Sammy added.

Sammy said no one pushed him into pulling.

“Growing up watching my dad do it and my grandfather, I always wanted to get involved and get into it. I’ve watched hundreds of truck pulls before I got started,” Sammy said.

This past summer, Sammy started the season at Skowhegan with a win. In his second event of the day, the Dirty Hooker blew its engine. The Chapmans swapped out the engine, and Sammy won his next 10 races on the fair circuit. His final pulls of the year were at Fryeburg Fair, where he beat out over 20 trucks from all over the country for two first place finishes.

With Sammy taking over driving the Dirty Hooker, Derek moved up a class after purchasing Double Trouble, which he races in the 4×4 modified class. Derek and Elden Pelletier both wanted to buy the truck. Pelletier wanted the engine, built by Sonny’s Racing Engines, but relented to letting Derek purchase it so he could have some competition in the class.

Double Trouble is a step up in power from the Dirty Hooker. It has a 650-cubic-inch engine, which runs on alcohol, and has more horse power at 1700. 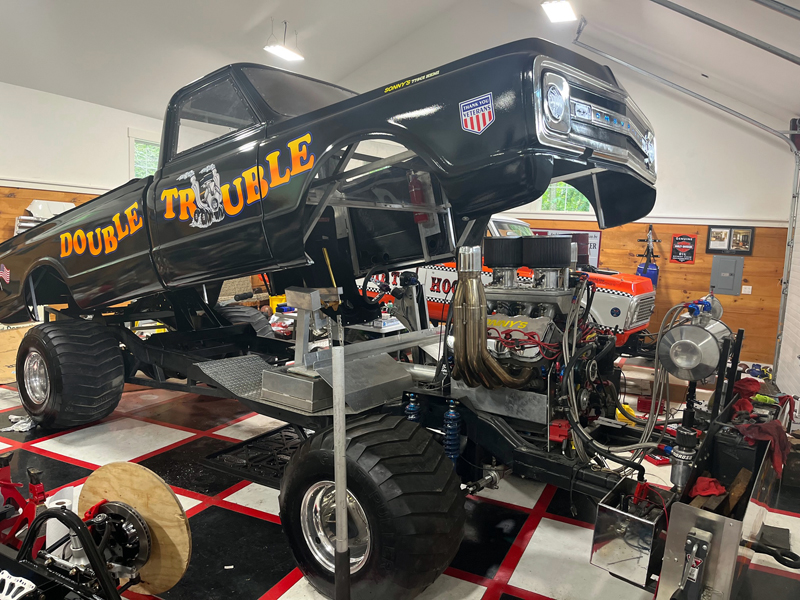 Derek pulls Double Trouble in the first race of the day, and John Blodgett, of Waldoboro, in the second. Derek offered the veteran driver the opportunity to drive again, in exchange for labor and trailering the truck.

“He does an exceptional job,” Derek said of Blodgett.

Blodgett had his own truck and pulled for 10 or 11 years, before giving it up during the COVID-19 pandemic. When Derek asked him if he was interested in the modified, Blodgett said he “could not pass up that opportunity.”

“Derek went first and I always paid attention, and then I changed the gearing,” Blodgett said. “I tried to beat him and it seemed to work.”

“It has been a fun couple of years working with that truck,” Blodgett added. He said the biggest differences in the 4×4 superstock and 4×4 modified, besides a bigger engine and alcohol fuel, is the transmission gearing, and bigger and wider tires. “You can change the gears internally to make the truck go faster.”

In super stock, the truck was once road legal, while in modified, the truck is specially built for pulling. Pressure on the front tires is typically four to five pounds and on the back 12.

“We want all the weight transfer on the front,” Blodgett said.

“Sammy was pretty impressive when we were first able to get him into a seat. He had big shoes to step into. He jumped in there with no holds barred. He just let it go,” Blodgett said about Sammy driving the Dirty Hooker.

“Jumping into the modified is quite a bit different. I am looking forward to seeing Sammy jumping into that, and bring the newer generation into the sport. It is a whole different animal,” Blodgett said.