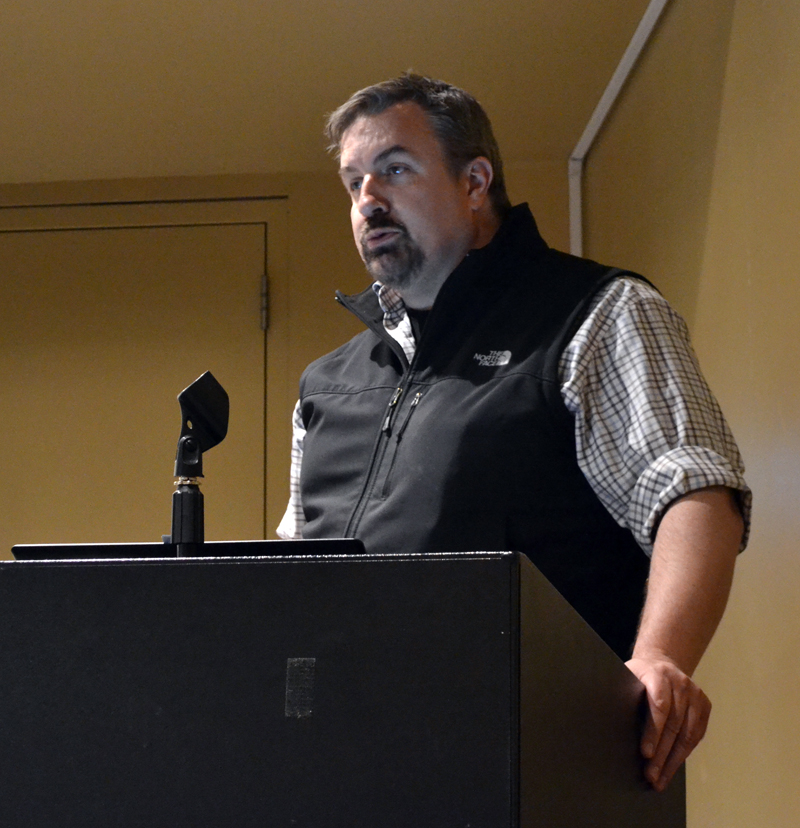 Peter Drum, of Our Town Damariscotta, speaks during a community conversation in the Porter Meeting Hall at Skidompha Library in Damariscotta the evening of Wednesday, May 3. (Maia Zewert photo)

Commercial development in Damariscotta was the topic of two separate meetings the evening of Wednesday, May 3. More than 40 area residents attended a community conversation hosted by Our Town Damariscotta in the Porter Meeting Hall at Skidompha Library, while the topic also surfaced across town during the Damariscotta Board of Selectmen’s meeting at the town office.

Peter Drum, of Bristol, and Jenny Mayher, of Newcastle, as representatives of Our Town Damariscotta, led the two-hour conversation at Skidompha Library.

From 2005-2006, efforts by the grass-roots group resulted in the passage of a 35,000-square-foot cap on commercial buildings in Damariscotta, preventing Wal-Mart from opening a store on Route 1.

Since the vote in March 2006, Our Town has been mostly dormant, Mayher said. With news that a developer had submitted an application for the construction of a Dollar General store and Sherwin-Williams store at the corner of Main Street and Biscay Road, the group started to mobilize to consider the options area residents have for voicing their concerns.

“Developers and professionals who want to come in have a real advantage, because they’ve done their research. They know about a town’s zoning rules and they know a lot about getting through the approval process,” Mayher said. “So when the news comes out that there’s an application, the community is caught on its back foot, and by the time people get educated about what’s going on, the project is moving forward.”

The purpose of Our Town is not to be anti-development, Mayher said, but to keep Damariscotta’s “unique character.”

“We want to be a thriving town full of businesses, but we don’t want to be the same as everyone else,” Mayher said.

During the community conversation, concerns were raised regarding waivers the Damariscotta Planning Board granted to Damariscotta DG LLC, the applicant for the Dollar General/Sherwin-Williams project.

The board granted six waivers for the project, for the number of parking spaces required for the Dollar General store, the location of the parking lots in front of the buildings, the number and placement of trees on the property, and others.

Planning board member Shari Sage said the board granted the waiver for the location of the parking lots, which the site plan review ordinance requires to be behind or to the side of buildings, for safety reasons relating to sight lines onto Biscay Road and Main Street.

Drum, an attorney, said he did not see anything in the ordinance allowing the planning board to waive the performance standards.

In a May 2 email, Damariscotta Town Planner Tony Dater said the planning board does have the authority to grant waivers for performance standards. The ordinance states that while the standards are meant to provide the minimum criteria for applications, the standards “should not be regarded as inflexible requirements nor should they discourage creativity, invention, and innovation.”

With the waivers granted, the Dollar General/Sherwin-Williams project received approval from the planning board with a 4-1 vote May 1.

Concerns were also raised regarding a Portland developer’s presentation to the planning board for another retail development along Main Street.

Daniel Catlin, CEO of Commercial Properties Inc., of Portland, and Andrew Sturgeon, the director of Maine operations for Hoyle, Tanner & Associates Inc., appeared before the planning board April 3 to present a sketch plan for an 11-acre property at 435 Main St.

The plan calls for the construction of three buildings: a 5,625-square-foot retail/restaurant building, a 3,400-square-foot bank with a drive-thru, and a 22,000-square-foot building for two retail stores. The property would also have 182 parking spaces, meeting the requirements of the site plan review ordinance.

The town has not received a formal application from Catlin and Sturgeon for the property, and there has been no further discussion at the planning board since the April meeting.

While the community conversation was happening across town, the Damariscotta Board of Selectmen held its regular meeting. Selectman Jim Cosgrove expressed frustration about the “anti-growth conversation” and Drum questioning the legality of the planning board’s decision.

Chair Robin Mayer said she believed the fact that new businesses are looking to move to Damariscotta is a good thing for the town.

“From my point of view, it shows we’re a vibrant community,” Mayer said. “It offers job opportunities and new services and products, not just for our shoppers, but for shoppers from other towns.”

Both Mayer and Cosgrove said it is not up to the selectmen or the planning board to decide what types of businesses come into town, even if existing businesses carry the same products or offer the same services.

The selectmen agreed that the scheduling of Our Town’s event was unfortunate, as they were unable to attend and hear the concerns being discussed. Our Town originally planned to hold the community conversation Thursday, May 4, but the Porter Meeting Hall was unavailable, Drum said.

Town Manager Matt Lutkus sent an email to Mayher and Drum to be read at the Our Town meeting. In his email, Lutkus said the selectmen understand and appreciate the need for a close review of all new development proposals to make sure developments do not detract from Damariscotta’s character.

While the town has an appeal process in place for residents aggrieved by planning board decisions, Lutkus said in his email to Mayher and Drum that it would be better for concerned area residents and the town to work together to come to a consensus on zoning laws rather than  go through what could be an expensive appeals process. 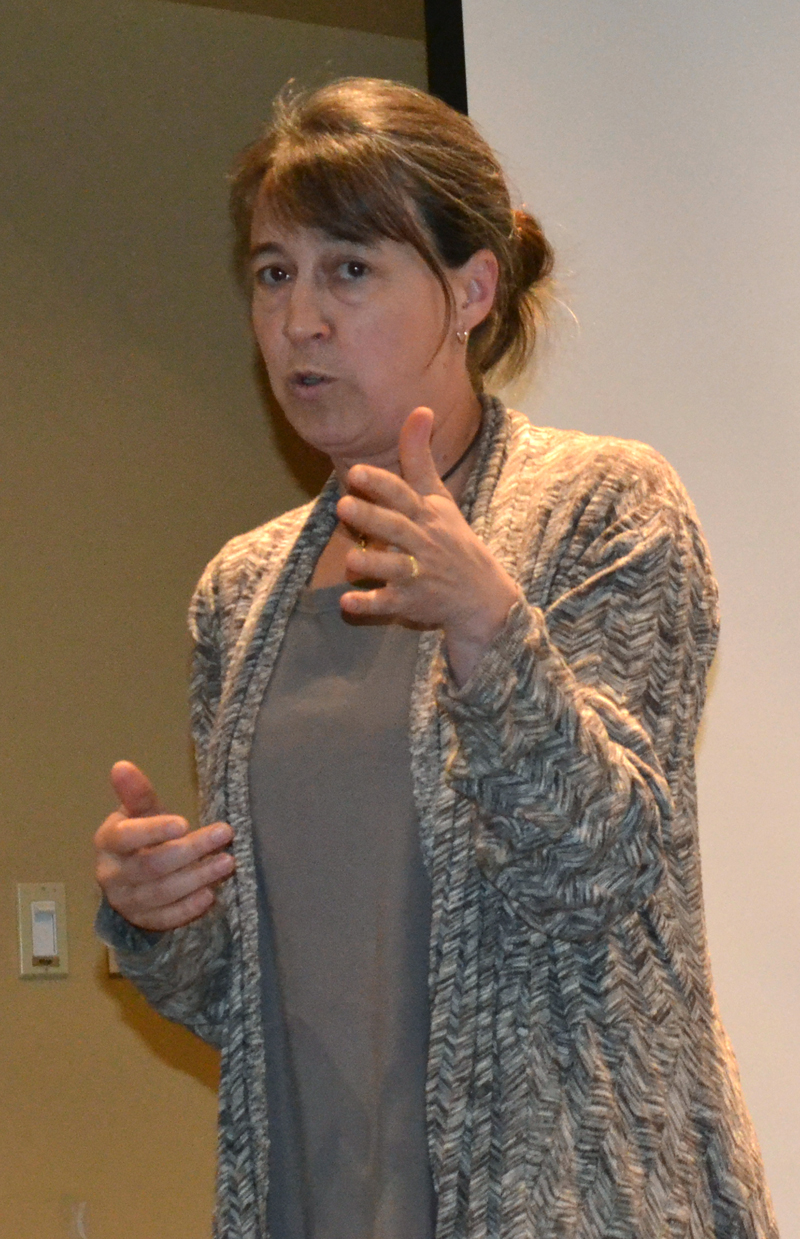 Jenny Mayher, of Our Town Damariscotta, speaks during a community conversation about recent commercial developments in Damariscotta on Wednesday, May 3. (Maia Zewert photo)

“I think the best way to approach this is to sit down with the town. The selectmen and the town manager are ready and willing to work together on this,” Pinkham said. “Personally, I would much rather see a positive outcome from this instead of what happened last time. I still see a lot of people who still don’t speak today after that.”

Drum and Mayher agreed that a proactive, cooperative approach to the discussion would be preferable to putting forth a citizens’ petition or asking for a moratorium on commercial development.

“I don’t think a moratorium is called for at this point, but I do think we need to enforce what’s on the books,” Drum said.

Another option that could be explored is the implementation of form-based code, which calls for multi-story, mixed-use buildings that are typical of historic main streets in New England. Drum said there are many positives to form-based codes, including the allowance for denser development and the continued reuse of buildings by different ventures.

In June 2011, Damariscotta voters overwhelmingly rejected a form-based code. Drum said Our Town came out against the code because the final product was a “watered-down version” due to the involvement of Piper Village Development LLC, which was proposing a major development at the time.

Drum said the town could consider putting forth the original form-based code that came out of the Damariscotta Heart and Soul Design Charrette, which was never presented to voters.

Moving forward, Our Town hopes to meet with Damariscotta officials to talk about concerns raised at the community conversation, Mayher said.

Lutkus said he has invited Mayher to come to the town office for the conversation, and that he welcomes anyone who has concerns to talk with him and the selectmen.

“I’m open to anyone who has concerns about our future as a town,” Lutkus said. “I think there are a lot of folks who don’t live in Damariscotta, but they consider Damariscotta as their hometown, and I think we need to be open to their perspectives.”

There are also many opportunities for residents of Damariscotta to run for a seat on the board of selectmen or volunteer to serve on the planning board or the Damariscotta Board of Appeals, Lutkus said.

The Damariscotta Board of Selectmen will meet Wednesday, May 17 in the town office beginning at 5:30 p.m.

Updates for Our Town Damariscotta will be posted on the group’s Facebook page.