A tractor-trailer in the process of unloading agricultural lime at the Damariscotta River Association’s Great Salt Bay Farm and Heritage Center in Damariscotta tipped over the morning of Monday, Nov. 6. No injuries were reported, according to the Damariscotta Police Department.

The driver, Randy Friend, 58, of Danville, Vt., had parked on DRA property and raised the truck’s bed to unload the lime when the big rig tipped over, coming to rest on its passenger side, according to Damariscotta Police Officer David Bellows.

Bellows said he thinks wind may have caused the tractor-trailer to tip over. Friend, who was inside the vehicle, did not report any injuries.

The lime was from Northeast Agricultural Sales Inc. in Lyndonville, Vt., Bellows said.

The Damariscotta Fire Department responded to the scene to mop up spilled liquids, according to Fire Chief John Roberts. 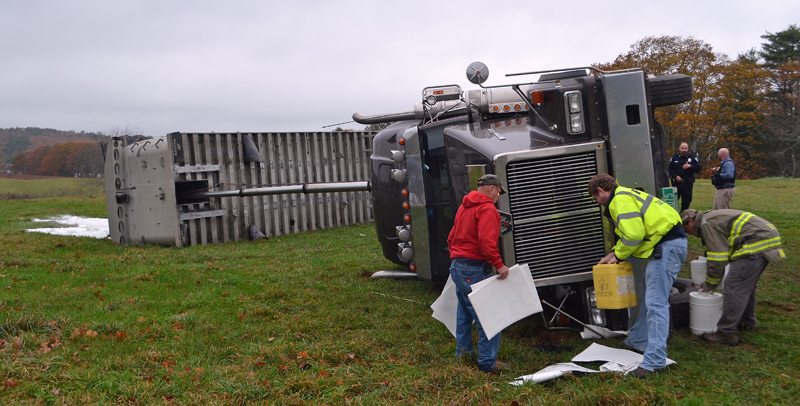 “We found fluids leaking from several places on the vehicle and took measures to contain and prevent the fluids from entering the environment using pads and containers,” Roberts said.

Roberts called the Maine Department of Environmental Protection to the scene.

“With their assistance we were able to capture approximately 25 gallons of leaking, oil-based fluids,” Roberts said.