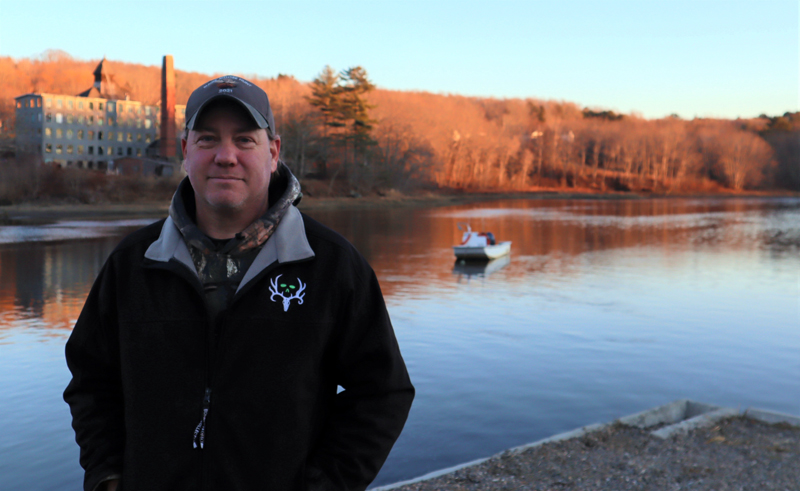 With small businesses still struggling to hire and retain workers in the economic upheaval of the COVID-19 pandemic, Waldoboro businessman and selectman Abden Simmons said he is running for state senate to support trade schools that will fill gaps in the workforce.

Establishing and funding trade schools will move young people with skills and certifications into industries such as electricity, plumbing, and automotive straight into the workforce.

And vital industries “need people now,” he said. “Why aren’t we putting money into trade schools?”

Local companies like Maritime Energy are booked out six months to install new heating systems in homes. If more people in the area were certified in heating, ventilation, and air conditioning, families in Lincoln County would not need to wait months in frigid Maine winters for a better source of heat, Simmons said.

His son, Dalton, served in the Marine Corps before choosing to study cyber-security in the Cyberspace Operations Division of the branch, a training program that funnels specialized workers into open positions. The narrow focus and shorter timeline struck Simmons as the answer to Mainers out of work and small businesses looking to hire, he said.

Simmons, a member of the Republican Party, announced his run for the Maine Senate District 13 seat last week.

A Democratic candidate for the district, which includes all of Lincoln County, the town of Windsor, and the town of Washington, has not announced a campaign yet.

In 2016, Simmons was elected by the people of Waldoboro, Friendship, Washington, and part of Union to the Maine House of Representatives. But he said he decided to run for state senate because it “will be easier to negotiate and compromise with less people.”

The house has 151 voting members, while the senate has 35 members.

Current Sen. Harold “Trey” Stewart, R-Aroostook, and Sen. Jeffrey Timberlake, R-Androscoggin, both worked with Simmons in the House of Representatives, and encouraged him to run for senate, he said.

“We need more people like Abden in the Senate who understand what working families are going through, what small businesses are dealing with, and how important it is to get Maine on a better path,” Timberlake said in a news statement.

During his time in the legislature, Simmons developed and passed legislation that modernized Maine’s shellfish programs, and created the elver lottery. The bill capped the number of license holders in the elver fishery to 425, not including Indigenous tribes, and created a lottery for people who did not have licenses previously.

“That way some new people can get in,” Simmons said, and the industry wouldn’t lose future elver fishermen.

Simmons has been a shellfish harvester for about 30 years and an elver fisherman for more than 20 years. He was recently appointed by Gov. Janet Mills to the board of the Maine Department of Marine Resources.

In the same vein, Simmons said he wants to focus his policies on preserving the Damariscotta River and the land surrounding it.

“The number one employer is the river,” Simmons said. “We should do everything we can to figure out how to sustain it.”

Issues with pollution from septic systems inspired Simmons to get involved with the Waldoboro Planning Board, because it was forcing closures on shellfish harvesting for two weeks every time it rained over an inch.

Though it is important to pursue renewable forms of energy, offshore wind turbines also have a detrimental impact on the shellfish industry because of the area acreage and the possibility of trawling gear for harvesting seafood such as scallops, Simmons said.

“Nuclear is controversial,” he said, but it is one of the cheaper sources of low-carbon energy.

Central Maine Power Co.’s controversial transmission line of hydroelectric power from Canada to Massachusetts “should have been a better deal for Maine,” Simmons said, arguing it was a source of renewable energy that would have passed through the state without providing any power.

“I don’t blame the people of Maine for voting it down,” he said.

Reaching across the divide

But the biggest problem he’s hoping to tackle is the “lack of communication and talking up there” in Augusta, “on both sides,” Simmons said.

While in the House of Representatives, Simmons said he met with Democratic leaders for dinner, and shared his perspective while listening to theirs, which led to the party dropping its proposal to raise taxes on vacation lodging.

“The majority of people affected were Maine residents on campgrounds,” Simmons said. He made the argument to Democratic leaders, who dropped the tax increase, he said.

As a candidate for the open seat in the senate, Simmons said he is “open to listening to people,” and acting on it to the best of his ability, he said.

To address the pollution in Damariscotta River, Simmons sampled the water quality and shellfish meat every first, third, and ninth day it rained more than an inch for a year, shortening the closure time for fishermen from two weeks to nine days.

“That’s an extra couple hundred thousand in revenue or better for the harvesters,” he said. “I’m going to bring the same commitment to projects in Augusta.”