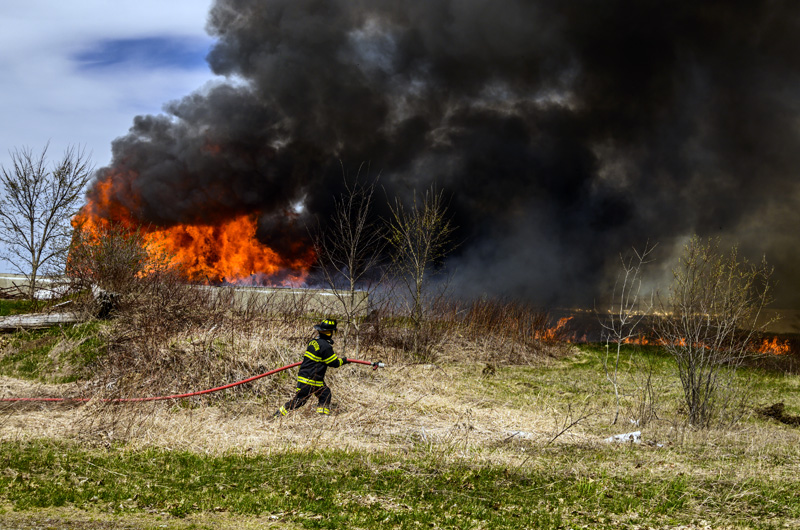 A firefighter heads toward a secondary fire after wind spread flames from a barn to a nearby field during a training exercise in Nobleboro on Saturday, April 24. (Bisi Cameron Yee photo)

Seven trainees were among the firefighters gaining live fire experience during the burning of an old chicken barn in Nobleboro on Saturday, April 24 — and a little extra training when an unplanned grass fire erupted during the exercise.

In addition to Nobleboro, the Bremen, Bristol, Damariscotta, Jefferson, Newcastle, South Bristol, and Waldoboro fire departments sent firefighters and trucks to the Brown Homestead, on Upper East Pond Road, for the exercise.

According to Genthner, there were about 20-25 firefighters on scene and about 10 trucks, including pumpers, tankers, and Waldoboro’s ladder truck.

Two 9-by-11, side-by-side burn rooms were built inside the barn using Sheetrock and fire-retardant paint. During the training, fires were ignited in the rooms using hay and wooden pallets as fuel.

In the first set of burns, trainees observed fire behavior. The ignition team, led by Smeltzer, set some hay and a pallet on fire in a burn room and let the smoke and heat build up to demonstrate thermal layering — how gases form in layers based on temperature and how smoke rises during a fire.

The second set of burns provided hands-on training for an “initial attack,” the aggressive response made by the first resources to arrive on a fire scene. Trainees stepped into the burn rooms to experience the intense heat and then extinguished the fire. They learned how to cool the room and how to stop the fire from building overhead.

There were nine rounds of burns. Genthner said the exercises provided critical training for firefighters who may have never experienced a structure fire.

Genthner said that when exposed to the intense heat, the impulse to run can take over. “This experience helps them to understand that it’s OK to be hot,” he said.

With improvements in fire safety, Genthner said, “There are far less house fires these days than there were in the past,” so firefighters may not gain experience as quickly.

Lucy Bradbury, who joined the Nobleboro Fire Department in December 2019, said that “going in feels like going to a live house fire scene. Once the fire is lit, the fumes and smoke pull you into a different head space.”

“When the fire hit the top layer, the heat rushed out at us,” said Nobleboro firefighter Kevin Rawley. “It was a lot of fun and good training.”

Nobleboro firefighter Jabon Chubbuck said the room was “really warm, the kind of warm that the minute you get out, you want to take everything off.”

Emergency medical technicians Ariel Marcoux and Leah Puckey, from the Central Lincoln County Ambulance Service, were on hand to monitor vitals and ensure there were no adverse reactions to the training exercise.

After the burn room training, the barn was cut in half with a chainsaw to encourage the structure to collapse in on itself. An excavator knocked down a third of the building and pushed it away from the other structures on the property.

Nearby outbuildings, including a vegetable cooler and a woodshed, were sprayed with class A foam to prevent them from catching fire. The Waldoboro ladder truck provided a water curtain from above as an additional layer of protection.

They noted a light breeze that morning and, after the burn room training, the breeze remained light. The chiefs conferred again and agreed to ignite the barn.

Genthner said that four minutes into the burn, the wind suddenly picked up and blew harder than predicted. He said it took about 30 minutes from the time Nobleboro Lt. Aaron Bradbury ignited the building for the large barn to burn completely to the ground.

Genthner said the building was very dry and filled with hay, wood, and combustible materials. Once it was lit, “the fire rolled like a freight train” through the barn.

Genthner said the secondary fire started when an ember from the building blew 100-150 feet back to part of a field. Firefighters reacted quickly to put the fire out. The fire burned about a half-acre of grass.

Genthner said the property owners were understanding of the secondary burn and “very happy to have the building gone.”

The Brown family granted the department permission to burn the large barn, which Dorcelle Brown said was originally a commercial henhouse, home to 5,000 laying hens. As she watched the building burn, she recalled rocking her infant son in his crib with one hand while washing eggs with the other.

Genthner said that a lot of planning went into the process, including environmental and safety discussions. The fire load, or weight of combustible material per square foot, had to be calculated, as well as how much water would be needed. More than a million gallons of water were available from two ponds near the location.

Genthner said it took over a month to obtain permits for the burn. “It was a long process, but it’s there for safety reasons,” he said.

Besides the grass fire, Genthner said, everything else went “100% as planned.”

The burn room training began at 9:08 a.m. and was completed by 11:30 a.m. The structure burn started at 12:13 p.m. Firefighters were on site until 4:48 p.m. to ensure both fires were completely extinguished.

Genthner said that since most Nobleboro firefighters were at the training, Newcastle covered the town’s station. Most of the other departments sent single trucks. Genthner said they were careful not to drain the county of resources.