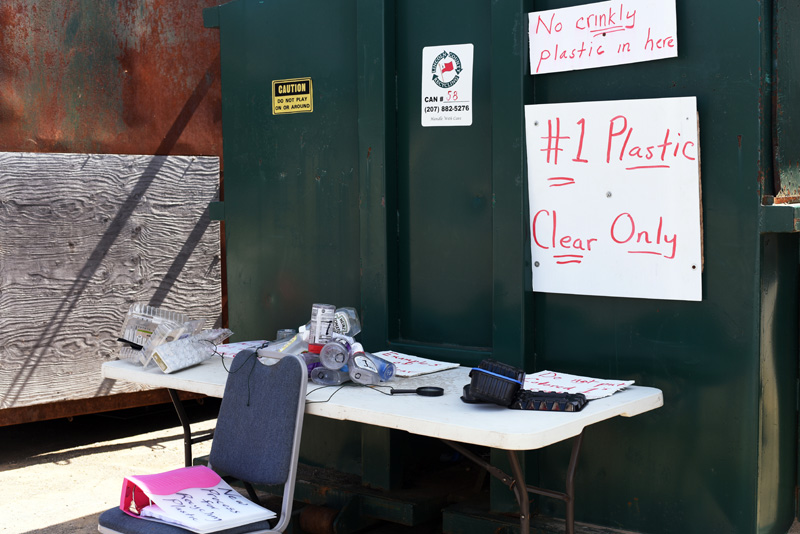 A display at the Nobleboro-Jefferson Transfer Station provides examples of which #1 plastics it accepts for recycling and which it does not. (Jessica Picard photo)

Municipal recycling centers and transfer stations across Lincoln County are in search of solutions for recycling plastic due to changes both in the international plastics market and at the county recycling plant.

The municipal centers send their bulk recyclables to the county plant, which has stopped accepting certain types of plastics. A change in China’s national policy regarding its purchase of recycled materials is driving the issue.

• #1 plastics must be separate from all other plastics. Clear #1 plastics will be accepted, but colored and “crinkly”or “clamshell” plastics now go in the trash.
Nothing is changing for #2 plastics, which will still be accepted.
• #3, #4, #5, and #7 plastics go in a separate container.
• #6 plastics and black #5 plastics are no longer accepted and must be thrown away.
• If a container has plastic that is not supposed to be in it, the entire container would need to be thrown away, according to Richardson.

“It’s so time-consuming for everyone … we don’t have the time to pick through it either,” Richardson said.

Richardson recommends that the transfer stations that are attempting to sort their plastics hire someone to focus solely on sorting.

However, when looking at the cost to throw plastic away versus the cost to hire someone to sort it, Richardson said only accepting #2 plastic is the way to go. 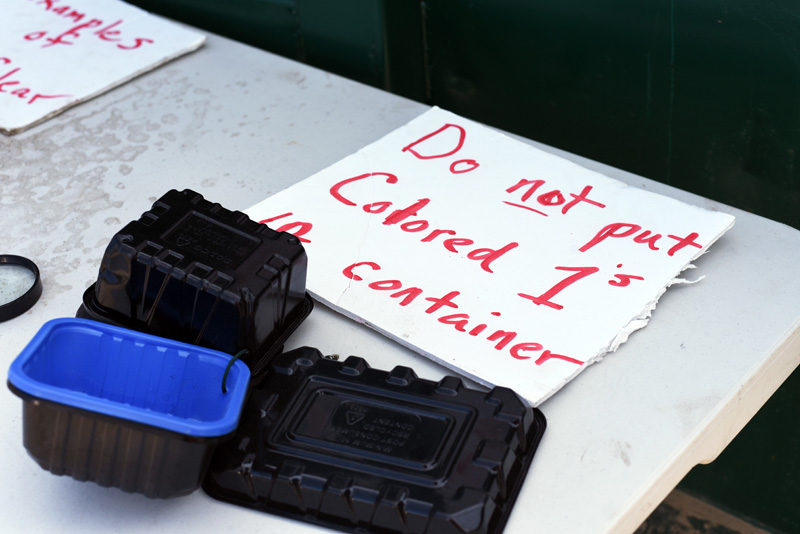 A sign at the Nobleboro-Jefferson Transfer Station, with samples, provides guidance on the type of #1 plastics the station cannot accept for recycling. (Jessica Picard photo)

The Nobleboro-Jefferson Transfer Station is going to continue to sort plastics as long as it can, according to manager Barry Howell.

The station has set up a table in front of the recycling containers with examples of what plastics are no longer being accepted.

“We now have a container strictly for #1 clear plastics. The #1 colored plastics must go in the trash,” a handout on the table reads.

“It didn’t work out very well,” Howell said of the first week of trying to sort the plastic.

People were getting confused and throwing plastics in containers that they didn’t belong in, according to Howell.

“A lot of people don’t want to throw things away, so we are digging it out of the other container,” Howell said.

“I’m going to hang in there,” Howell said, although he does not think the station has the manpower to sustain the new sorting system.

“I can’t hire an extra person just to do that. I don’t have a budget for that,” Howell said.

Howell said the station has to “give it a chance,” but he is “not too optimistic.”

The Bristol-South Bristol Transfer Station has resorted to only accepting #2 plastics for recycling, according to manager David Poland.

All other plastics are going into the trash for now, according to Bristol Town Administrator Chris Hall.

“Our dilemma is that, if we continue to sort, we would probably need to hire another person just to sort the plastics,” Hall said. 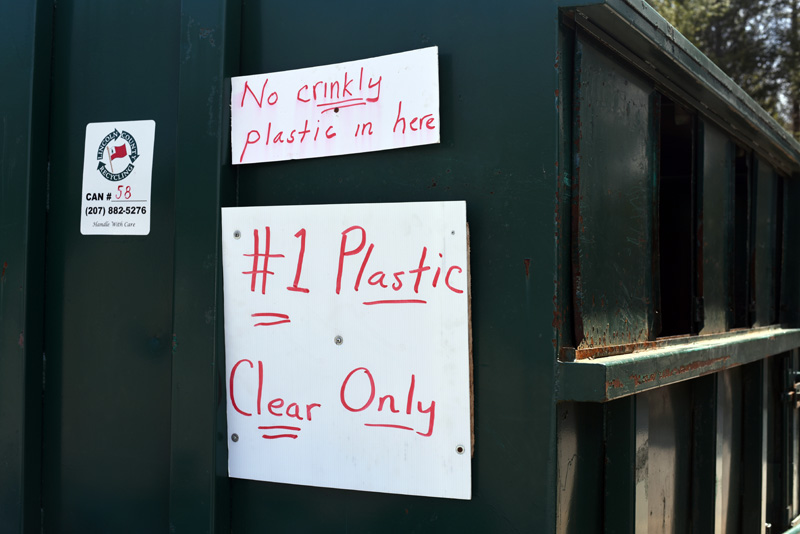 A sign on a recycling container at the Nobleboro-Jefferson Transfer Station directs station users to place only clear #1 plastic in the container. (Jessica Picard photo)

The transfer station has only three employees. “I can’t justify hiring another guy just to sort plastic,” Poland said.

“It would be a big expense,” Paul Yates, chair of the Bristol-South Bristol Transfer Station board, said of hiring another person.

The transfer station’s board consists of the Bristol and South Bristol selectmen.

Bristol Board of Selectmen Chair Chad Hanna expressed frustration with the county’s decision.

“Part of everybody’s tax bill goes to fund Lincoln County Recycling. The trend has been less and less being able to be sent there … If they’re going to force what used to be recycled goods into our landfill costs, it incurs additional costs for us,” Hanna said at a selectmen’s meeting April 4.

“It’s kind of frustrating to be paying for part of the operational costs of Lincoln County Recycling” and to have the plant place the new restrictions on recycling, Hanna said.

Poland said he is “hoping it’s just temporary” and that an alternative can be found.

Some options that have been considered are continuing to only accept #2 plastic, hiring someone to only sort plastic, or switching to single-stream recycling, according to Hall.

“There’s really not many options,” Ken Lincoln, vice chair of the transfer station board, said.

“We should take a look at some alternatives … I think it may be time to take a hard look at whether Lincoln County Recycling is actually giving us the best service at this point,” Hall said at the selectmen’s meeting.

The Bristol-South Bristol Transfer Station board will meet at the Bristol town office at 6:30 p.m., Wednesday, April 17 to discuss possible solutions.