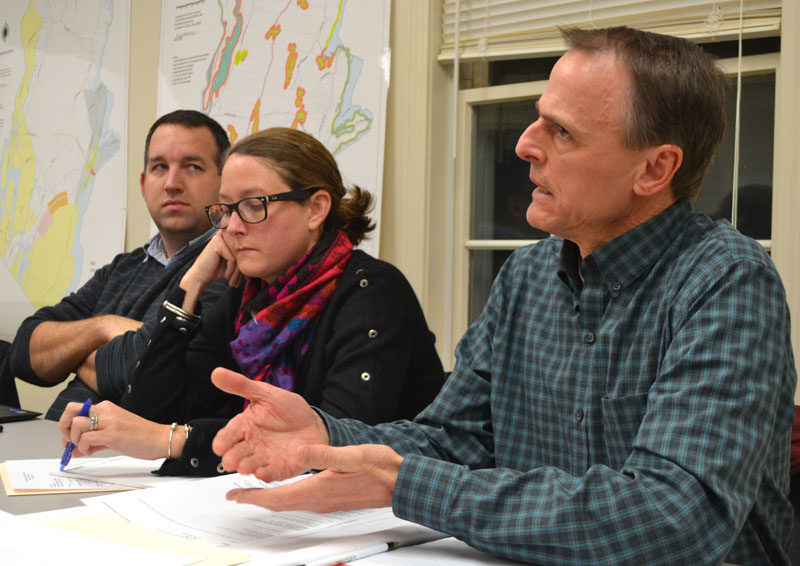 The Newcastle Board of Selectmen had worked to schedule a meeting with Bernhardt about the project, which includes a plan to purchase conservation easements – by eminent domain if necessary – on properties around the marsh in Newcastle and Edgecomb.

The easements would total approximately 130 acres. By placing the conservation easements, the DOT would create a wetland bank to offset the wetland impacts of transportation projects elsewhere in the state.

Bernhardt answered questions the selectmen had submitted prior to the meeting, including why the DOT decided to place conservation easements on the land rather than purchase property from the current landowners.

“We’re not a land management agency,” Bernhardt said. “Sometimes we acquire properties, but a lot of the times when it comes to environmental issues, we take easements because it is not full ownership.” 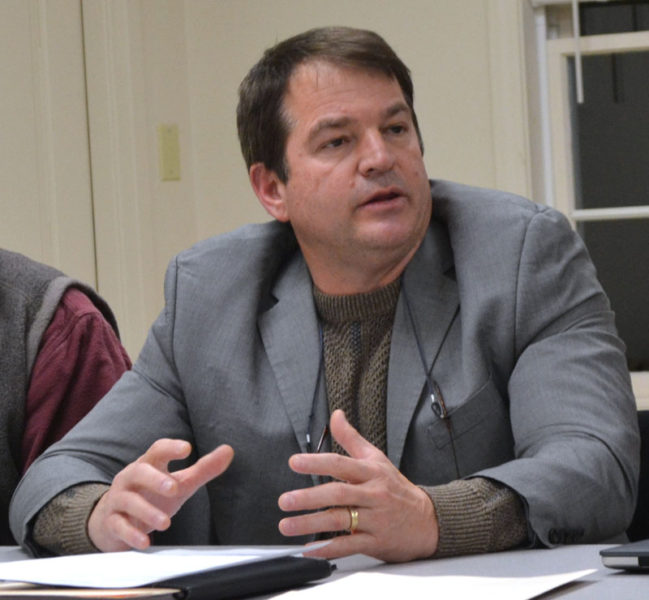 Bernhardt said an easement that restricts certain rights on a property protects the land for the future. In addition, conservation easements are one of the fairest processes for the public, he said.

Local zoning ordinances, including shoreland zoning, also place restrictions on property owner’s lands, Bernhardt said. The difference with a conservation easement is that the DOT will pay the property owner to place the restrictions.

While the DOT has placed conservation easements on properties before, this is the first time easements will be placed on land going into a bank, Bernhardt said.

“With most of our work, at some point and time, there is an impact somewhere,” Bernhardt said. “In the end, we need to cut a check, and the check will go through the (Department of Environmental Protection) to go toward mitigation and doing the things that they need to do.”

“This was put in place in April 2008, where they allowed us to bank some of this so that I don’t have to cut those checks anymore,” Bernhardt said.

While the department will still pay the property owners for the conservation easements, the amount is “not nearly what it could be,” Bernhardt said.

Selectman Chris Doherty asked if the DOT would consider a “consent-based solution,” similar to the U.S. Department of Energy’s efforts to find a home for spent nuclear fuel. Under a consent-based process for land banking, an individual could offer land to the DOT to be banked for credit, Doherty said.

DOT Project Manager Deane Van Dusen said if an individual were to offer land to the DOT for an easement, federal and state regulators would have to review the offer to determine if the department would receive any credit for the property.

The properties would have to be free of easement and under a degree of threat in need of protection, Van Dusen said. The DOT could not, for example, receive credit for a property that was already protected by a conservation group.

Some of the area around Sherman Marsh is already protected by shoreland zoning, but an interagency review team comprised of federal and state officials asked for more land to be protected, Van Dusen said.

Bernhardt also took questions from the property owners in attendance. The Sherman Marsh Wetland Bank project has met with frustration from local property owners, including frustration with the restrictions that would be placed on the land once the easements take effect and the amount of land in question.

Martha Gaythwaite said she disagreed with Bernhardt’s comparison of the easements to shoreland zoning.

While shoreland zoning is the result of the legislative process and landowners can request variances, the restrictions placed on the conservation easement by the interagency review team will follow the property in perpetuity, Gaythwaite said.

“What you’re proposing is a restriction on my land so that if one day I am lucky enough to have grandkids and they want to put a dock out and go kayaking, they can’t do that because these unelected, nameless people at the (interagency review team) have decided that would be environmental degradation,” Gaythwaite said.

Gaythwaite also pointed out the difference between the compensation the property owners have been offered and the mitigation value the DOT gains from the site.

“It seems as though you’re trying to take something for less money than it’s worth, and you’re trying to impose restrictions that nobody has been able to explain to us the basis in environmental science,” Gaythwaite said. “If the value of what you’re gaining for the DOT is $4 million and you’re not planning on spending $4 million, that means the property owners that abut Sherman Marsh are essentially subsidizing projects for the DOT.”

In addition to the acreage that will be placed in the easement, each property will also have a buffer zone, which is an area around the easement with restrictions on its use. The interagency review team determined the width and restrictions for the buffer zones. 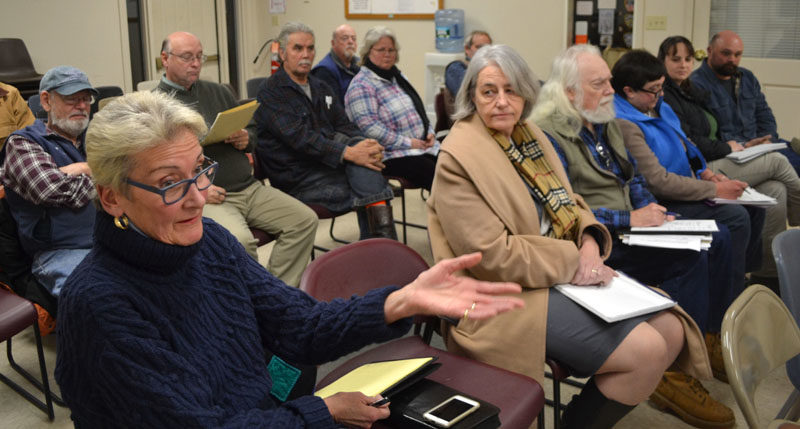 Marva Nesbit, one of the landowners whose property abuts Sherman Marsh in Newcastle, asks a question during a meeting with Maine Department of Transportation officials Monday, Dec. 12. (Maia Zewert photo)

Wood, who uses his land for cattle, had originally been told that he would be required to have a 100-foot buffer on his property where the cattle could no longer graze.

Van Dusen said the interagency review team determined there could be a 50-foot zone near the marsh where the cattle would not be permitted, however, the cattle could graze in the other 50-foot area.

Throughout meetings with DOT officials, there have been negotiations regarding an expanded list of permitted uses of the properties, however, the landowners have not received a written list, Nesbit said.

“There have been verbal concessions made, but I have nothing in writing,” Nesbit said. “You’re putting restrictions on me that affect the value of my property.”

Van Dusen agreed to a give each property owner a document outlining the agreed-to uses of each of the properties prior to the landowners’ meetings with a negotiator.

Updated appraisals could be completed by early March, and negotiations with property owners will follow, Van Dusen said.

The acquisition of the easements is planned for early June, although a concrete deadline has not been set due to the number of projects that personnel in the DOT’s property office are working on, Van Dusen said.