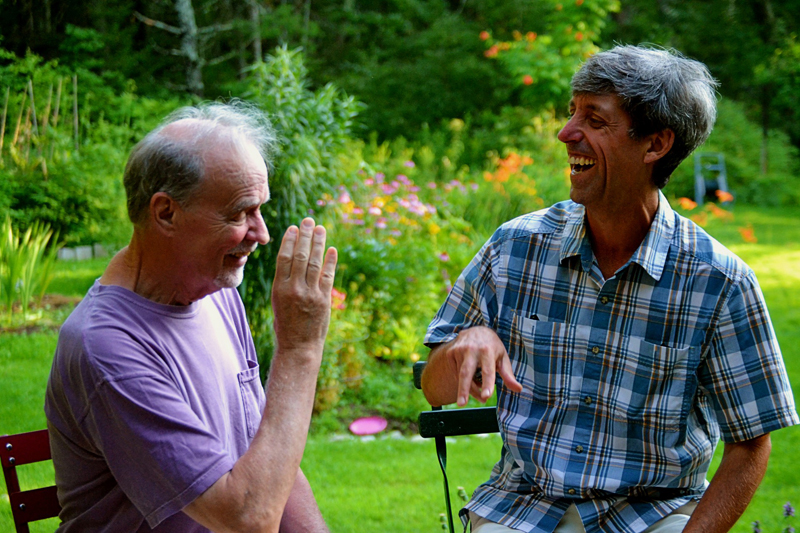 Local recycling and waste-management researchers and activists Michael Uhl and Mark Ward hope to further awareness and discussion of recycling and trash in Lincoln County with a public forum Thursday, Aug. 22.

Uhl, of Walpole, and Ward, of Bristol, founders of “Talking Trash! A Community Education Project on Waste Management,” will host the forum at Coastal Rivers Conservation Trust’s Round Top Farm in Damariscotta.

For the past nine months, Uhl and Ward have researched waste management in Lincoln County and published their findings in a series of letters to the editor of The Lincoln County News.

To better understand waste disposal, they have taken to the road. Destinations have included all of the county’s transfer stations, the county recycling center, a state landfill, two waste-to-energy incinerators, and two materials recovery facilities.

They’ve spoken with a state legislator, the county administrator, the selectmen of their towns, local transfer station managers, a representative of the Maine Department of Environmental Protection, and the Sustainable Maine project director for the Natural Resources Council of Maine.

Uhl and Ward have gathered a tremendous amount of knowledge on the topic of waste management.

Uhl and Ward started “following the garbage” in April 2018, after learning that the Bristol-South Bristol Transfer Station would only accept No. 2 plastics. All other plastics – No. 1 and Nos. 3-7 – were to go in the trash.

The plastics had previously gone to the Lincoln County Recycling Center for resale.

“We shared the realization that we had no idea where our trash or recycling was going after putting it in the correct bin at the transfer station,” Uhl said.

Curiosity led Uhl and Ward to visit the Lincoln County Recycling facility in Wiscasset, where most (but not all) of the county’s recyclables are sorted, baled, and hauled away to their respective buyers.

In their letter “Following the garbage,” Uhl and Ward urged readers to utilize the food scraps bins at their local transfer stations, even if they do not wish to compost at home.

Uhl and Ward also brought to readers’ attention how Lincoln County households collect their recyclables. Many towns use source separation, in which the consumer separates various recyclables at home and brings them to their transfer station, which takes them to Lincoln County Recycling to bale and sell. In the alternative process of single-stream recycling, the consumer throws all of their recyclables into a receptacle for mechanical sorting.

Uhl and Ward considered the advantages and disadvantages of both methods by touring the Wiscasset Transfer Station, which employed the single-stream method until recently, and other transfer stations, which rely on source separation. They also witnessed the single-stream recycling process at the Ecomaine facility in Portland, to get a closer look at how the system operates.

Back in January, Uhl and Ward examined every item in their household trash after a period of six days.

“We found that doing so, even for a single day, made us incredibly more aware of what is being wasted and thrown away,” they said in their letter “What’s in your garbage?”

“I make a conscious effort to recycle and opt for plastic alternatives, and I still feel disgusted by all of the waste that I’m bringing into the household,” Uhl said. “The topic of garbage is inevitably overwhelming.”

Uhl and Ward said decisions in China have eliminated much of the market for recycled plastics.

Municipalities across the country, including those in Lincoln County, had to decide to pay higher rates for recycling or throw it all away.

Nonetheless, Uhl and Ward took China’s change in policy as an opportunity to investigate the existing structures for trash and waste disposal throughout Lincoln County.

“Now is the time to make people conscious about recycling,” Uhl said. “This way, we can avoid piles of trash in the landfill.”

With over a dozen submissions, Uhl and Ward have brought a host of different issues that deal with waste and recycling throughout Lincoln County to readers’ attention. From navigating the many ways local transfer stations handle their trash and recycling to explaining the DEP’s annual reports to the Maine Legislature, they have sought to make the topic of waste management more manageable.

“It’s a complicated topic, and we have a lot more to learn and share,” Ward said.

The community forum at Coastal Rivers Conservation Trust will seek to engage the audience with an interactive, informal, and entertaining presentation and explanation of waste management in the area.

Uhl and Ward hope that the forum will spark a discussion among residents on the ever-present topic of trash.

The event will take place from 6-8 p.m. at 3 Round Top Lane, Damariscotta.

A grant from the Maine Humanities Council is funding the forum, with support from Coastal Rivers Conservation Trust and The Lincoln County News.