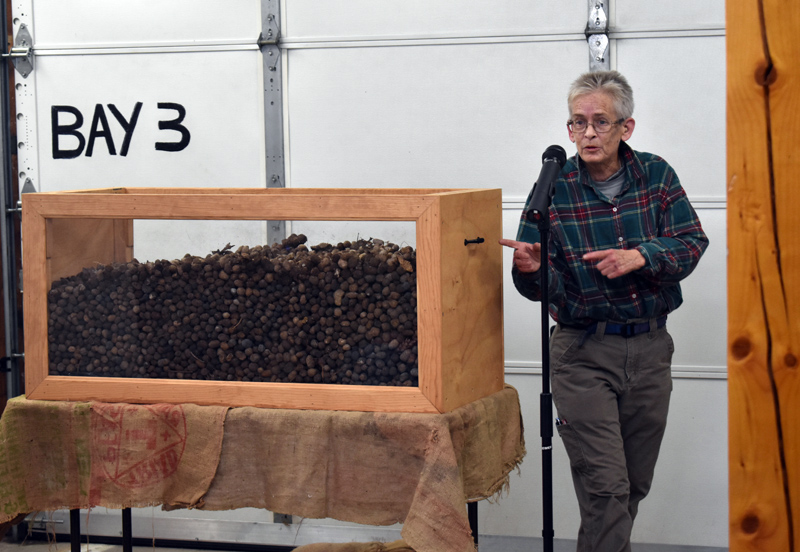 Mary Winchenbach, founder and owner of Tirdy Works, gestures toward a box of moose droppings during a television shoot at the Somerville fire station Thursday, Oct. 24. (Alexander Violo photo)

Somerville artist Mary Winchenbach, of Tirdy Works, was the center of attention at the town’s fire station Thursday, Oct. 24, as a television crew filmed her, her fellow residents, and a giant box of moose poop.

From a booth at the Common Ground Country Fair in Unity and a viral video to Comedy Central and now a new reality show, Winchenbach has parlayed a knack for making gifts out of moose poop into national attention – and orders.

Filming the “moose-poop lady,” with her one-liners and moose-related humor, was a crew from Scout Productions, a television production company based in Los Angeles.

The production company came prepared with a slew of equipment, including a boom microphone and plenty of cameras, to document an evening in Somerville, the premise of which was a town hall meeting.

According to Shay Caldwell, a field producer with Scout Productions, the show does not have a title yet. Few details about the show were available, although Winchenbach previously said she was in talks with the cable network TNT.

The crew interviewed residents, asking questions about the town and its newly famous resident. Later, Winchenbach took the floor to talk about her product, dramatically ripping a burlap cover off the big box of moose poop before continuing a comedic back-and-forth with the audience.

As filming wrapped up, Winchenbach relayed her two favorite parts of Tirdy Works: it has given her an opportunity to spend time in the woods, something she loves doing, and to make people smile.

“Life is too short to be negative and I like to make people happy,” she said.

Working out of a home marked with a sign that says Moose Tird Corner, Winchenbach crafts items such as poo poo clocks, poo poo platters, and fecal people, little dolls made from moose poop.

“It’s fun coming up with all these names,” she said.

The filming at the fire station was not Winchenbach’s first time in front of television cameras. She and her wife, Deb Nicholls, have also been interviewed by Daniel Tosh, of the Comedy Central show “Tosh.0.”

According to Winchenbach, the treated moose poop does not have an odor. It has to stay in a dehydrator for a couple days before it can be used in Tirdy Works items.

During the course of filming, Winchenbach fielded a question from a fellow resident about whether the moose poop was edible.

After a great deal of laughter and a few jokes, Winchenbach said that although there is no reason for anyone to want to eat it, she had the processed moose poop tested at a Waterville laboratory. It came back with a coliform and E. coli count of zero.

“Basically it has a lower bacteria count than a cooked hamburger. You could eat it and you won’t get sick, but it will taste like crap,” Winchenbach said.