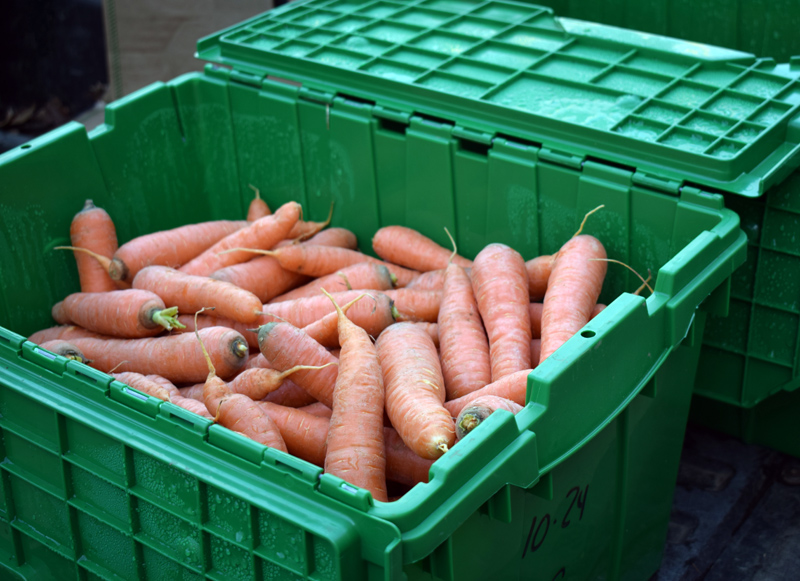 The Ecumenical Food Pantry, of Newcastle, will distribute hundreds of pounds of carrots and other produce from Twin Villages Foodbank Farm in Thanksgiving baskets for local families. (Evan Houk photo)

The Twin Villages Foodbank Farm, of Damariscotta, is busy this Thanksgiving. The farm is distributing produce for Thanksgiving baskets and will host a 5K trail run at its headquarters Thanksgiving morning.

Aided by student volunteers, they unloaded 400 pounds of carrots, 200 pounds of red onions, and 100 butternut squash for inclusion in Thanksgiving baskets.

According to a representative of the food pantry, Jim Swan, nearly 200 Thanksgiving baskets will be distributed in 10 Lincoln County towns this year.

The produce for the Thanksgiving baskets was only a fraction of the estimated 50,000 pounds of food harvested this year on the farm’s 2 acres on Belvedere Road, up from 30,000 pounds last year. Since it started in 2015, Twin Villages has been increasing its yield every year, which Cawthon attributes to the loose, healthy soil at the site. 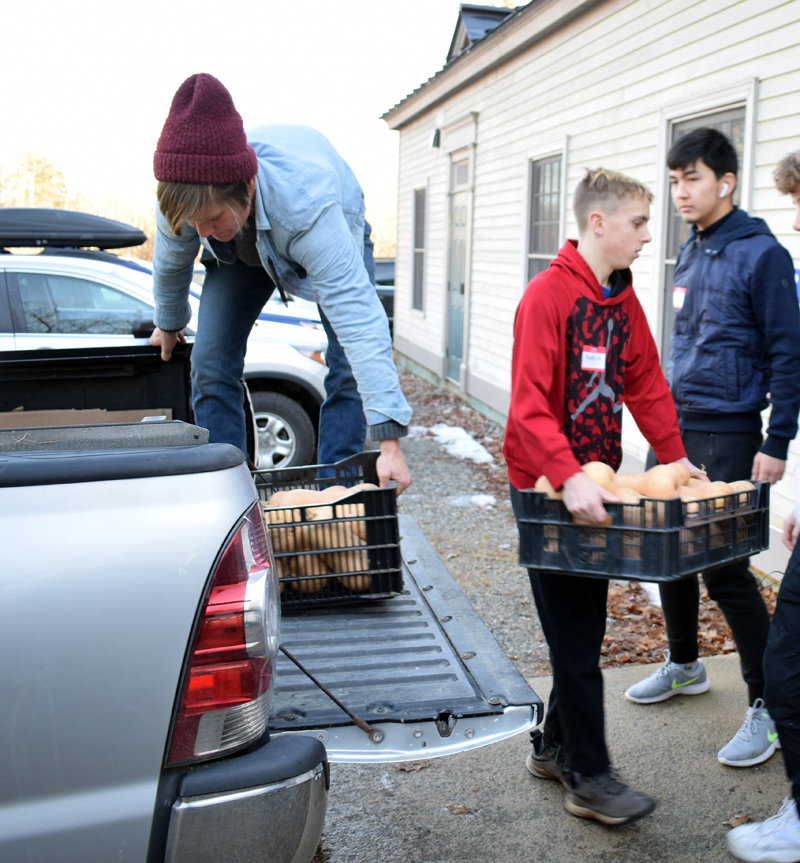 “Every year we put a ton of amendments in, like organic compost and sea minerals, like shrimp meal, ground-up shrimp shells, for minerals and vitamins. And every year, that soil gets fluffier, the organic matter makes it looser. And when the soil’s looser, the crops, carrots, can go deeper and they bring up minerals from down below,” Cawthon said.

Cawthon said this contributes to the food growing bigger and more nutrient-dense, lasting longer, and tasting better. She said the soil is also more resilient, as it can absorb much more rain than normal soil, preventing crops from washing out.

Cawthon said loose, healthy soil traps more carbon, preventing it from being released into the atmosphere and contributing to climate change.

“If you let Mother Nature alone and just do her thing, it’s much better,” Cawthon said.

Next year, Twin Villages will have another acre and a half to farm after the purchase of new land next to Great Salt Bay Farm by Coastal Rivers Conservation Trust.

The farm allows the food pantries and other groups to use its new walk-in cooler and surrounding space for storage. This is the first full year the farm is using the cooler and storage space in the basement of Darrows Barn at Coastal Rivers Conservation Trust’s Round Top Farm.

She said storage varieties of carrots and cabbage can last up to nine or 10 months in the 38-degree cooler. These varieties are grown specifically to last longer.

The use of the cooler is important because, in the winter, the supply of fresh food goes down and the demand usually goes up. 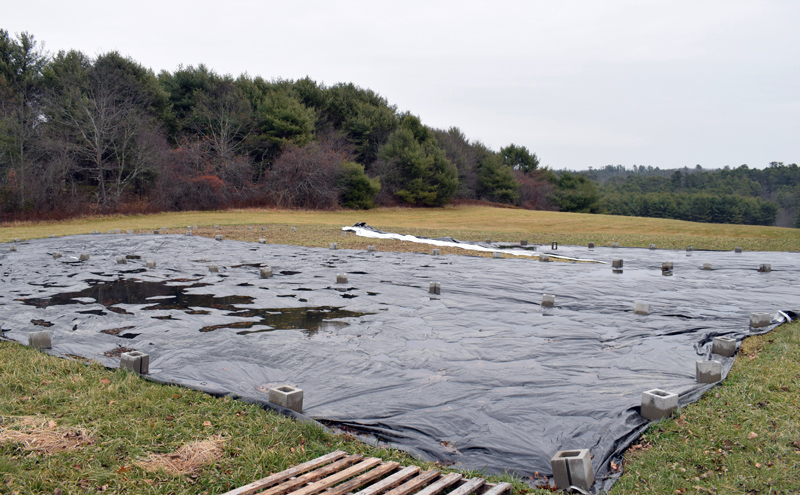 A new 1.5-acre patch of farmland recently purchased by Coastal River Conservation Trust for use by Twin Villages Foodbank Farm. Farm Manager Sara Cawthon said the land is covered with a tarp to prevent weeds from growing. (Evan Houk photo)

Cawthon said having a central storage space for the pantries and other organizations allows the groups to build relationships and be flexible with their foodstuffs.

If Newcastle’s Ecumenical Food Pantry has leftovers after its distribution day, it might bring its leftovers to the storage space, where the WIC program will pick them up. “It’s just more people sharing food,” Cawthon said.

Twin Villages Foodbank Farm is funded through donations, grants, and a modified community-supported agriculture model, through which supporters donate to cover the cost of a seasonal farm share or part of a share.

Much of the harvesting at Twin Villages Foodbank Farm is performed by volunteers.

The farm instituted its first formal adult volunteer program this year and saw about 20 regular volunteers every week, Cawthon said. She said about 40 adults volunteered throughout the season.

Cawthon said she and Gardner perform weekly harvests at the farm, but try to coordinate the large harvests with groups of volunteers. She said one group of students harvested between 700 and 800 pounds of carrots in one hour. 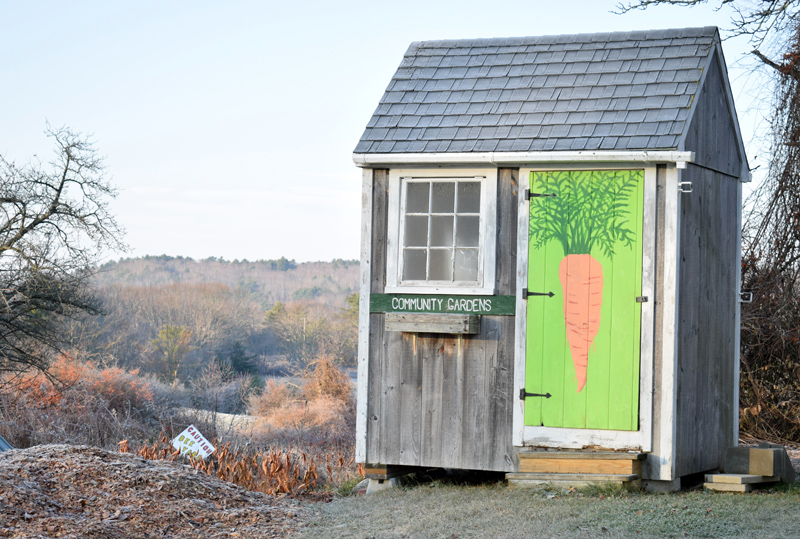 A storage shed at Twin Villages Foodbank Farm in Damariscotta. The farm harvested an estimated 50,000 pounds of produce this year for donation to food pantries and other nonprofits. (Evan Houk photo)

The Thanksgiving 5K trail run and 1-mile walk/fun run at Great Salt Bay Farm is being coordinated by volunteers as well. The event, a fundraiser for Twin Villages Foodbank Farm, will begin at 9 a.m., Thursday, Nov. 28.

Twin Villages Foodbank Farm has come a long way from being just a seed of an idea in the heads of Cawthon and her partner, Megan Taft, who heads up farm development, in the spring of 2015.

Cawthon said she and Taft, both of whom have extensive backgrounds in farming, moved to Damariscotta and wanted to do a community project, so they talked to Steven Hufnagel, executive director of Coastal Rivers Conservation Trust.

“Since then, all the pieces have come together better than we could have imagined,” Cawthon said.

For the future, Cawthon said she hopes the farm will continue to increase production, find more outlets to donate to each year, and purchase a more powerful tractor with forks for carrying heavier produce loads.

“The little tractor we have, if you put a pallet on it, it will tip over,” Cawthon said with a laugh.

“We have scaled up past the tractor,” Cawthon said.

She said the farm plans to continue to slowly scale up and keep delivering food to Lincoln County residents in need.