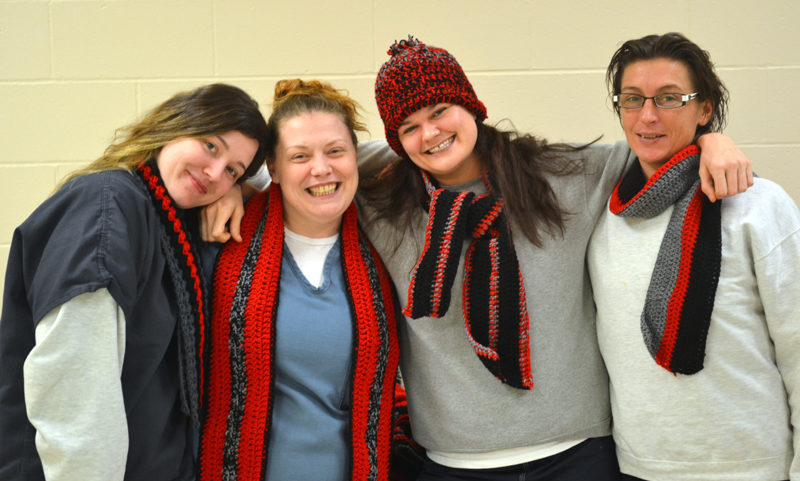 The crochet club at Two Bridges Regional Jail is a positive activity in a negative space, and one that provides a feeling of accomplishment, participants said. On Friday, Dec. 9, the club gathered to celebrate creating about 100 hats and 100 scarves to donate to the Special Olympics Scarf Program.

The black, gray, and red hats and scarves crocheted by inmates will be distributed to Special Olympics athletes and supporters. The statewide goal for the Special Olympics Scarf Program is 500 hats and 500 scarves, according to the project’s website.

The single donation from Two Bridges Regional Jail made a significant dent in that goal, and the inmates said it feels good to know their creations will help others.

Two Bridges Regional Jail Program Officer Sue Sutter pushed to start a crochet club soon after the jail opened, she said. The crochet club is now a long-standing program at the jail, which donates much of what is made to local social service organizations.

Some of the women who participate had previous experience crocheting. For others, it’s a new skill learned at Two Bridges.

“It’s a healthy activity,” said Samantha Tucker, an inmate. “It’s nice to come out of here with a positive skill.” 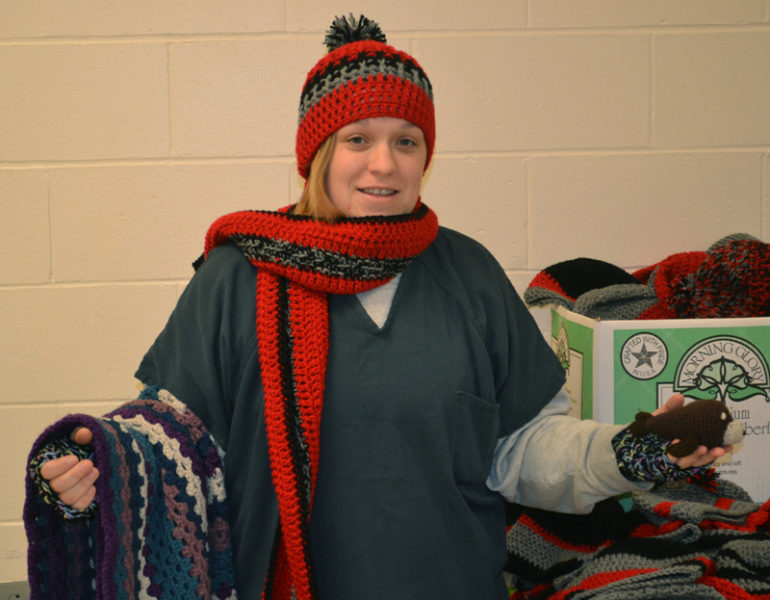 Crocheting gives inmates something to do while in the pod, or living quarters, of the jail, and creates a bond between inmates, inmate Tami Day said. “It’s nice to communicate with all the girls and see them smile for a change,” she said.

Inmates are often in “their own little depressed space,” Day said, but crochet club lifts them out of it. The program also gives inmates an opportunity to break through some of the “learned behavior” and patterns inmates fall into “on the outside” that has resulted in incarceration, she said.

“It’s replacing bad habits with good ones,” Christa Money, another inmate, said. Crocheting not only gives inmates a positive group activity, but also enables them to make gifts for their own families and children, in addition to social service organizations.

Inmates have crocheted Afghan blankets for distribution through local food pantries and animal figurines that have been donated to Toys for Tots, Sutter said.

All the participants expressed gratitude to Sutter for creating the program and teaching many of them how to crochet. Once released, one inmate said she intends to pass on the skill by teaching her children how to crochet.