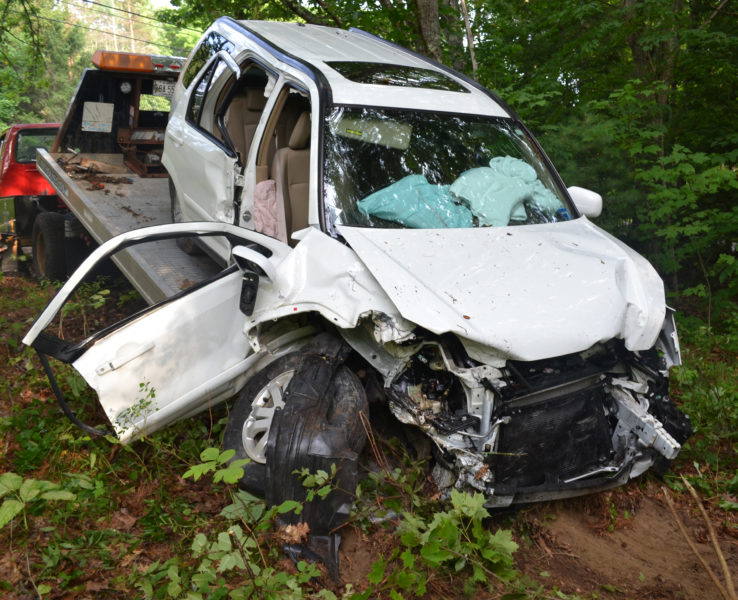 The Wiscasset Fire Department extricated one of the occupants of this Honda SUV following a two-car collision on Gardiner Road in Wiscasset at about 5 p.m., Friday, Aug. 12. (Abigail Adams photo)

A U-turn on Route 27 in Wiscasset was the cause of a two-car collision that sent five people to area hospitals in the early evening of Friday, Aug. 12, according to a report from the Wiscasset Police Department.

Pemberton Johnson, 19, of Topsham, was driving a silver Audi sedan north on Gardiner Road (Route 27) in the vicinity of the Bog Road intersection when he attempted to pull into a driveway to make a U-turn, according to the police report.

Robert Pomerleau, 78, of Augusta, was driving a white Honda SUV, did not have time to stop, and struck Johnson in the front driver’s side, according to the police report.

Information about the extent of their injuries or which hospitals they were taken to was not available.

The passenger in Johnson’s vehicle fled the scene of the accident, according to the police report. The individual has been identified, but his identity is being withheld pending further investigation, Wiscasset Police Chief Jeff Lange said. No citations have been issued, but the investigation into both the accident and the individual’s leaving the scene is ongoing, according to the report.

The section of Route 27 surrounding the accident was closed from about 5-6 p.m. on Aug. 12 as emergency personnel worked to clear the scene.