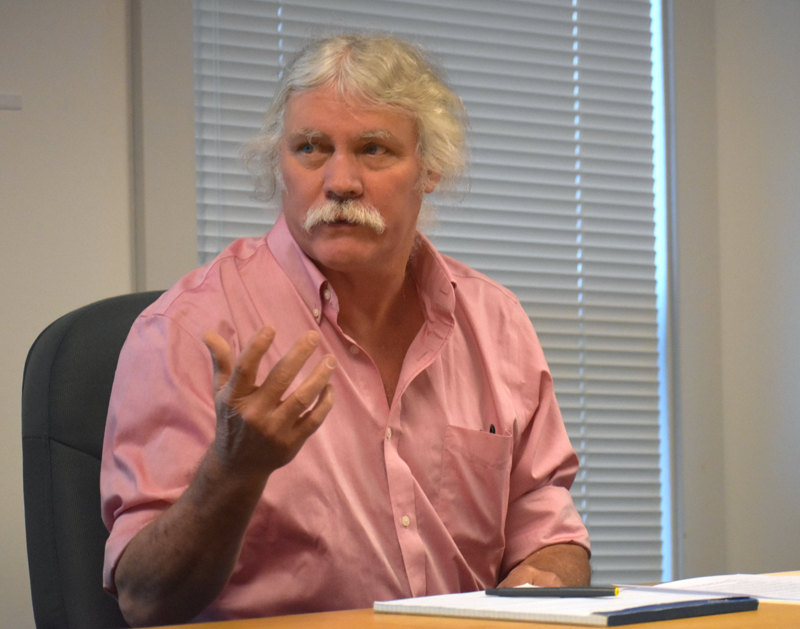 Hall retired after 30 years of working in research computing management at the Massachusetts Institute of Technology in Cambridge, Mass.

He owns the BugTussle Brooder, a light industrial and small-business development space at the former Fieldcrest Manor Nursing Home on Depot Street; and The BugTussle Annex, a high-tech co-working and event space in the former Taction building on Jefferson Street.

Simmons represents Maine House District 91, which consists of Friendship, part of Union, Waldoboro, and Washington. He sits on the Legislature’s Marine Resources Committee.

A graduate of Medomak Valley High School, Simmons bought his home on Jefferson Street in 1993 and opened a clam-buying business in Waldoboro in 1996. Simmons now runs a bait shop and plans to bring a clam-shucking station to Waldoboro.

Winchenbach has been a Waldoboro resident for over 30 years.

She is retired, having worked in several occupations, including as a clerk at Bath Iron Works, a newspaper typesetter at The Lincoln County News, a medical records keeper at a Waldoboro doctor’s office, the owner of a gardening business for 15 years, and a contract driver for MSAD 40.

Winchenbach chairs the Waldoboro Republican Town Committee and belongs to Concerned Citizens of Waldoboro and the Memorial Day Committee. She has been the master of ceremonies for the annual Memorial Day ceremony at the Pine Street memorial and has recently become involved with the American Legion Auxiliary in Waldoboro.

The candidates night was moderated by Jacob Newcomb, a Waldoboro resident and social studies teacher at Medomak Valley High School.

The event opened with introductions.

Hall said he is passionate about economic development and excited that the renewable energy subcommittee had been able to bring a solar array to the town’s landfill.

“I’m interested in economic development and small businesses. I’m really interested in what we can do in Waldoboro. I think it’s a town on the move,” Hall said.

Hall said he ran unsuccessfully for the selectman last year, but is running again because he wants the select board to become more active.

Hall said that in addition to controlling the budget and controlling development in town, the board could look into tax increment financing and tax incentive zones.

Simmons said he first ran for selectman because he felt a change was needed and the board needed to be revitalized. 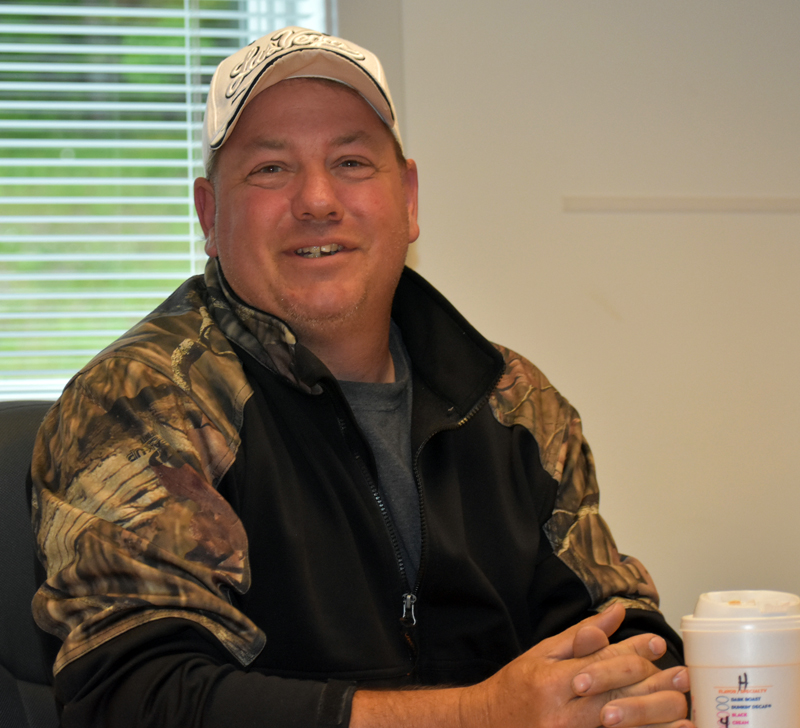 “It took a couple years to get acclimated, but we got a good select board that gets along really well and I think we have accomplished a lot,” Simmons said.

The first question from the moderator dealt with economic growth in Waldoboro.

Hall said he feels the economic situation of a town’s residents has a huge impact on how a down does and he would like to see more involvement from the select board to create opportunities.

“I think the key at the local level is the select board. That hasn’t been the case here, as in many towns. A vision is a good thing to have,” Hall said.

Simmons said he views jobs as very important and said the town needs to have ordinances that attract businesses and the employment opportunities they offer to Waldoboro.

Simmons said it took him six months to start building his clam-shucking operation.

Simmons proposed going through the town’s land use ordinance with the town’s contracted planners to find out where it can make improvements.

“I was jumping through hoops continuously. It almost wasn’t worth doing. That’s not right. It’s something we really need to fix if we are going to have economic development here,” Simmons said.

Simmons also mentioned an aborted aquaculture development on Dutch Neck and the resistance it met from neighborhood residents.

“It’s a revolving problem we have here. It’s difficult to attract business if we have that type of mentality,” Simmons said.

Hall agreed that the town’s ordinances need to be updated, saying it was a goal of the planning board during his time as chair.

“The badly written ordinances need to be redone. I hope (the planning board) will do it soon,” Hall said.

Newcomb then asked the candidates about the importance of fiber-optic cable in Waldoboro.

Hall described the topic as one close to his heart, saying he founded the communications technology committee with John Lawrence.

“I think the town has to invest money in broadband,” Hall said.

Simmons said Lawrence approached him two years ago regarding the use of town money to expand fiber access.

Simmons said he is willing to help out in any way, including by going to the Maine Public Utilities Commission to seek a grant, but he does not want to spend town money on the effort.

“If we already have fiber (in the village), why aren’t businesses coming in? If we have all this in place, why aren’t there companies? And I go back to the ordinances. Businesses can’t expand or increase the way the ordinances are written,” Simmons said.

The discussion turned into a broader exchange on the importance of working to improve town infrastructure.

Hall said he is in favor of investing in sewer and water and in favor of a future sewer extension.

“Towns are like businesses. They don’t grow or thrive unless you invest. When the economy is really doing well, the town should think differently,” Hall said.

Simmons said he was in favor of infrastructure improvements if they are grant-funded.

“Infrastructure is huge. I don’t have a problem getting grants. That’s where I want to see the money coming from,” Simmons said.

Newcomb asked the candidates for their stance on recreational marijuana.

Hall said he is concerned about the impact recreational marijuana could have on younger residents.

“I know I don’t like social clubs. Don’t have strong feelings about retail sales. I consider alcohol and tobacco more dangerous,” Hall said.

Hall said he supported the ongoing moratorium on recreational-marijuana businesses.

“I think there is a lot of difference of opinion, lot of interest, and that’s a good thing. I hope the select board thinks deeply about the economic implications. I don’t know why we should just out of hand not think about that,” Hall said.

Simmons said he would follow the will of town voters on Tuesday, June 12, when they will vote on a proposal to permanently ban recreational-marijuana businesses.

“It is a huge economic driver. Some people in town don’t want to see it here. Let voters decide,” Simmons said.

Newcomb asked the candidates for their opinions on the future of A.D. Gray, the long-shuttered former school.

Hall said he is a member of the Medomak Valley Community Foundation and pushed a proposal to transform the building into a community center.

Hall said the foundation spent 18 months working with the selectmen to this end, working on private fundraising and locating potential anchor tenants. 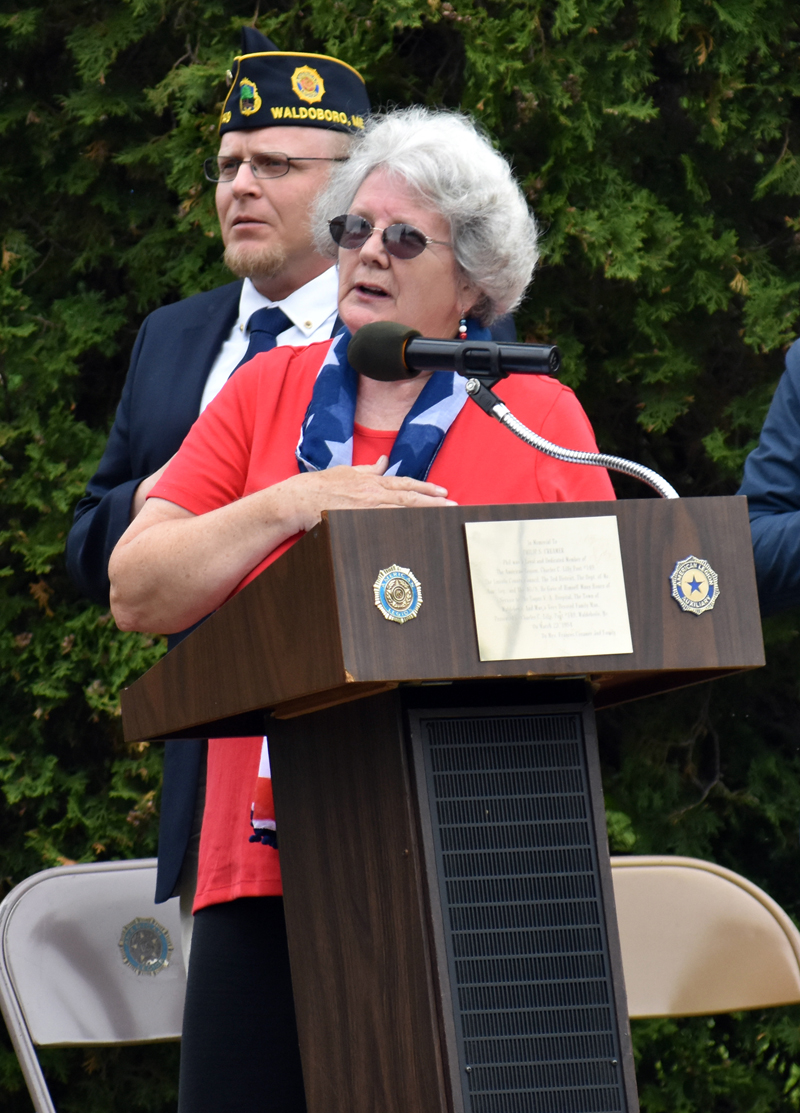 Katherine Winchenbach speaks at the Memorial Day ceremony in Waldoboro. She did not attend the candidates forum. (Alexander Violo photo, LCN file)

“We need a community center. If the town is indeed against it, not what the survey indicated, but if they are, we should build it somewhere else,” Hall said.

Simmons, who attended A.D. Gray as a student, said the selectmen weren’t convinced that the community foundation’s venture was feasible.

“(Selectman Bob) Butler proposed putting it on the market for one year and I reluctantly agreed. I think a new center there would be much more appealing and more cost-effective than investing in an old building that is still going to be an old building,” Simmons said.

“Turn it into a vacant lot and create a recreation center or turn it over to a developer to put it back on the tax rolls. I think we really need to look at doing something with that lot,” Simmons said.

In a phone interview after the candidates forum, Winchenbach said that if she is re-elected, she would work to lower taxes and bring business to town.

“I listen to people and do the will of the people. I’m not sitting at the table for myself. I’m there for the people,” Winchenbach said.

Winchenbach said she wants to have conversations with residents and is always ready to answer phone calls or emails.

“I like to talk to people. I just like to bring their issues forward, where they should be,” Winchenbach said.

“I want to keep going with my work, trying to lower taxes and bring business to town,” Winchenbach said.

To get the word out about her campaign, Winchenbach said she hosted a campaign dinner and made business cards that she has distributed.