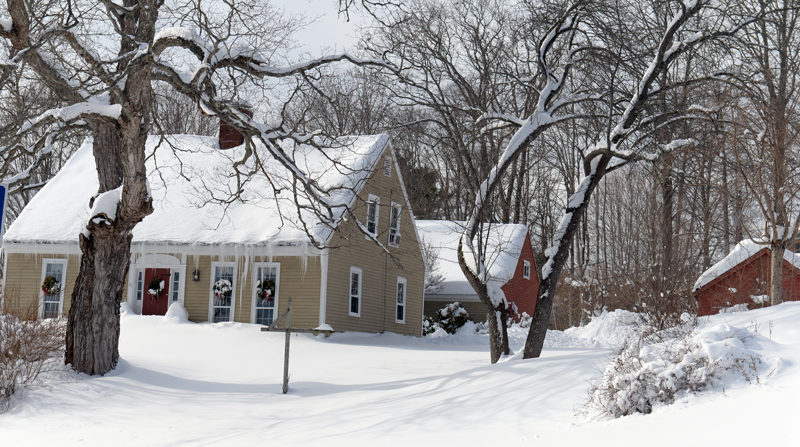 Lincoln County was hit with a one-two punch of stormy weather beginning Saturday, Feb. 11 and continuing, after a short break, through Monday, Feb. 13.

Final snowfall totals in excess of 2 feet were reported throughout the area, along with wind damage, traffic incidents, and power outages. A snowfall of about 22.5 inches was recorded in Newcastle for the Sunday-Monday storm alone, said Arlene Cole, a cooperative weather observer with the National Weather Service.

Even so, it could have been worse, according to Lincoln County Emergency Management Agency Director Casey Stevens. “Thankfully the snow was not the wet and sticky kind. If it had been, I believe the outcome would have been dramatically different,” Stevens said.

Steady snowfall began overspreading Lincoln County early Saturday morning. The National Weather Service issued a winter storm warning beginning at 6 a.m. that continued through 10 p.m. That system created no major incidents and brought 4-8 inches of snowfall to the area. Snowfall in Newcastle from the Saturday storm was about 4.2 inches, Cole said.

After a short break in the weather in the early morning and midday hours of Sunday, a significantly more robust system blew into the area, warranting a winter storm warning from the NWS, followed by a blizzard warning.

Snowfall began to intensify during the overnight hours of Sunday, and Monday morning, Lincoln County residents awoke to snowfall rates of 2-4 inches an hour, along with sustained northeasterly winds in the 25-35 mph range with gusts to 55 mph.

Most Lincoln County residents followed Stevens’ advice and hunkered down at home. Some folks who ventured out on the roadways met with mishaps. In particular, four tractor-trailer drivers lost control of their vehicles on Route 1 in Waldoboro.

According to Waldoboro Fire Chief Paul Smeltzer, at approximately 11 a.m. Monday, three tractor-trailers jackknifed on Perry Greene Hill between Dow Furniture and the cell tower. A fourth tractor-trailer ran into difficulty in the vicinity of Bullwinkle’s Steak House.

Waldoboro fire crews shut down Route 1 at the intersection with Route 32 and directed multiple tractor-trailers to turn around due to the weather conditions.

Route 1 reopened just before 1 p.m., and no injuries were reported in the accidents, according to Smeltzer.

“However, there was a period of time mid-morning when the driving conditions were the worst I’ve ever seen,” Maker said.

Earlier in the day, whiteout conditions were so severe that plow trucks throughout the county were pulled off the road.

Hagar Enterprises pulled its drivers off the road from around 8-11 a.m. for the drivers’ safety, according to Seth Hagar.

“With the sheer volume and intensity out there, it was getting impossible for them to see. There was nothing we could do but wait it out,” Hagar said.

Some law enforcement cruisers were among the vehicles that had difficulty navigating the roads, with a couple vehicles from different departments getting stuck in snowdrifts, Maker said.

In one instance, a deputy who was responding to a report of a vehicle off the road near the intersection of Route 1 and Sheepscot Road in Newcastle also got stuck, Maker said.

Law enforcement will always respond to emergency calls, Maker said, but avoiding the roads in dangerous conditions reduces the number of those calls.

Despite the wicked weather, power outages were scattered during the event.

All power was restored to Lincoln County residences by 10 p.m., according to CMP.

Even after the blizzard warning was withdrawn at 7 p.m. Monday, severe weather was still affecting Lincoln County.

The NWS issued a special weather statement Monday night saying gusty northwest winds running along the backside of the passing weather front would continue into the nighttime hours, with blowing and drifting snow making travel treacherous and visibility low in some areas.

While areas of light snow continued into the night, any additional accumulation was minor, according to reports.

“All in all I would say we have fared well, however, we are now in the recovery stage and residents should take it easy during cleanup and communicate with household members or neighbors. That way, if assistance is needed, someone will be able to help and guide first responders,” Stevens said.

“The recovery from this storm is now the biggest problem,” Stevens said. “This is a lot of snow and the cleanup is apt to take a while. There was little to no damage to infrastructure, however, the biggest effect of this storm will be noticed during cleanup.”

Stevens urged residents to clear any snow affecting the exhaust vents of their home heating systems to protect against the possibility of carbon-monoxide poisoning.

Stevens credited emergency services and public works departments throughout Lincoln County, including the Lincoln County Communications Center, as “once again doing an excellent job providing the services that our residents expect, storm or no storm. During incidents like this, we are all one big team.”

Responding to emergency calls in blizzard conditions “is part of the job,” Maker said. “They did a great job – the deputies, the fire departments, the plow drivers.”

In a closing note, Stevens said, “We have seen how being vigilant of this storm and following recommendations of officials has made a big difference. Due to the positive outcome of this storm, I encourage residents to remain vigilant in the future.”