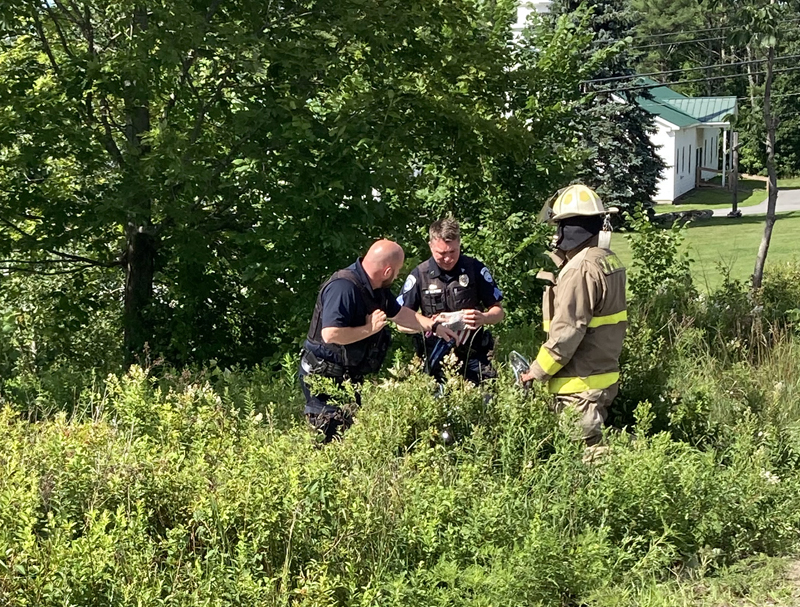 Damariscotta police and fire officers work at the scene of a motorcycle crash on Main Street in Damariscotta the afternoon of Wednesday, July 15. Both occupants of the motorcycle suffered severe injuries, police said. (Maia Zewert photo)

The operator and passenger of a motorcycle suffered severe injuries in a crash on Main Street in Damariscotta the afternoon of Wednesday, July 15.

Normand Bilodeau, 67, of Harpswell, was operating a 2014 Harley-Davidson FLHR south on Main Street, near the intersection with Belvedere Road, when the motorcycle went off the road and onto the shoulder, according to Sgt. Erick Halpin, of the Damariscotta Police Department. Normand Bilodeau’s wife, Ann Marie Bilodeau, 57, was on the back of the motorcycle.

The motorcycle hit an incline on the shoulder and became airborne before landing on its left side, Halpin said. Both Normand and Ann Marie Bilodeau were thrown from the motorcycle.

The cause of the crash is unknown, according to Halpin.

Halpin said the Bilodeaus both suffered serious injuries in the crash. The Central Lincoln County Ambulance Service took them to LincolnHealth’s Miles Campus in Damariscotta. They were then taken to Maine Medical Center in Portland for further treatment. Halpin said both are expected to make full recoveries.

Both riders were wearing helmets and appropriate attire for motorcycle riding, Halpin said. The bike was totaled.

The Damariscotta Fire Department provided traffic control at the scene. Traffic was restricted to one lane.