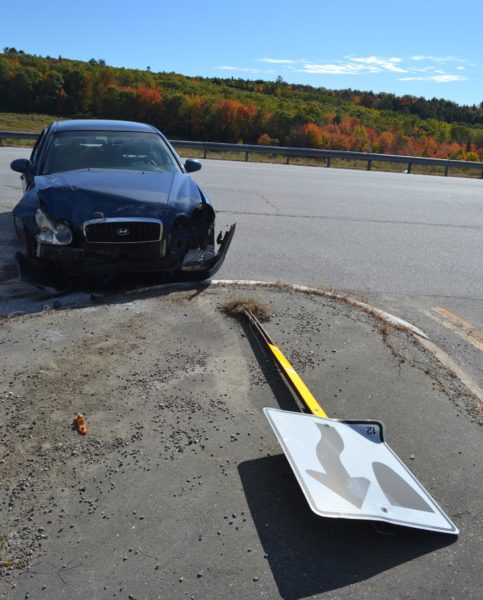 A 2005 Hyundai Sonata struck a street sign after a two-car collision on Route 1 in Damariscotta on Wednesday, Oct. 12. (Maia Zewert photo)

Two people were transported to LincolnHealth’s Miles Campus after a two-car collision on Route 1 in Damariscotta on Wednesday, Oct. 12.

Laura Safford, 46, of Damariscotta, was driving north on Route 1 near Center Street, according to Damariscotta Police Chief Ron Young.

Safford attempted to turn left onto Center Street and pulled in front of a 2005 Hyundai Sonata southbound on Route 1, driven by Barbara Blum, 78, of Thomaston, Young said.

Patricia Sullivan, of Camden, was a passenger in the Sonata, Young said.

Airbags in both vehicles deployed, Young said. Both Blum and Sullivan were wearing their seat belts.

Young issued Safford a summons for not wearing her seat belt, and an additional summons is pending, he said.

The Damariscotta and Newcastle fire departments also responded to the scene.