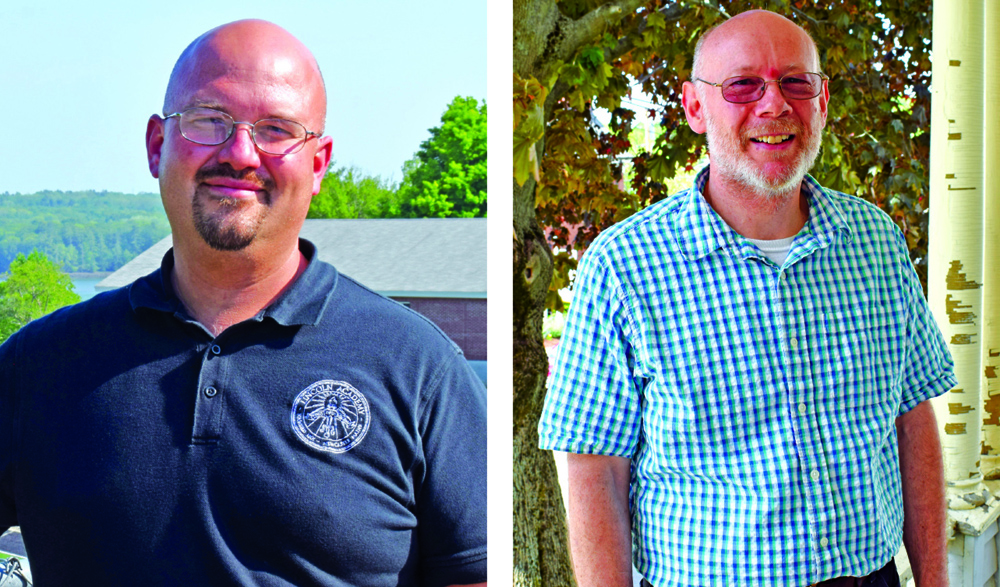 The candidates for a one-year term on the Newcastle Board of Selectmen, from left: Jacob Abbott and David Levesque. (Evan Houk photos)

Jacob Abbott and David Levesque are running for a one-year term on the Newcastle Board of Selectmen.

The election will take place as part of Newcastle’s annual town meeting by referendum on Tuesday, June 8. The polls will be open from 8 a.m. to 8 p.m. at the Clayton V. Huntley Jr. Station on River Road.

Brian Foote, then chair of the board of selectmen, resigned earlier this year in the second year of a three-year term. The winner of the Abbott-Levesque race will take Foote’s seat and finish his term.

Jacob Abbott has lived in Newcastle since 2013, when he moved into Hall House at Lincoln Academy as a dorm parent and quickly joined the fire department.

He is currently the dean of students and director of residential life at LA and lives on campus with his family.

Abbott grew up in West Gardiner and lived at Hidden Valley Farm, now Hidden Valley Nature Center, as a caretaker with his wife for a period of time.

He worked for four years with adults with disabilities before finding a job as an educational technician at Cony High School in Augusta.

In 2006, he found the same position closer to home at LA, before transitioning into a teaching role there.

In 2018, he received his master’s degree in educational leadership and was hired as LA’s dean of students shortly thereafter.

Abbott said during an interview on Wednesday, May 26 that he has been involved in fire departments since he was a teenager and is currently a lieutenant, treasurer, and trustee of Newcastle’s Taniscot Engine Company.

“I’m real passionate about serving the community in that regard,” Abbott said.

Abbott said he never thought he would become a teacher, but his friends used to tell him, “You’re going to be a teacher someday.”

Abbott has served on the executive board of the Central Lincoln County YMCA since 2017. He believes his experience in this area and his experience listening and making hard decisions at school have prepared him to serve on the board of selectmen.

He said he sees the position of selectman as an often overlooked role that has a lot of potential to affect change.

Abbott said he believes Newcastle is in a good place at the moment and he wants to serve on the board to continue to “propel Newcastle into the future.”

“I think that’s key, is how do we set our community up to be respectful of what’s important to this community while also recognizing that change happens?” Abbott said.

Levesque, an attorney, has lived in Newcastle with his family for 21 years and practices law out of an office in Damariscotta.

“Our roots are so strong now and the sense of community is amazing around here,” Levesque said during an interview on Thursday, May 27.

He said his law practice is a general civil practice that mostly deals with real estate and estate planning.

“It’s a fun practice. I don’t get bored by doing the same thing over and over,” Levesque said.

He currently chairs the recently formed Newcastle Broadband Committee, serves as an alternate on the Damariscotta Historic Preservation Commission, sits on the board of The Carpenter’s Boat Shop, and chairs the University of Maine at Farmington Board of Visitors.

“I’m a firm believer in giving back to my profession or the community in some way,” Levesque said.

Levesque said that his experience on various hiring committees would inform him in the search for a new town manager in Newcastle.

Jon Duke, Newcastle’s first town manager, has been hired for the same position in his hometown of Rockport. His last day in Newcastle will be Friday, June 18.

“It could be a very exciting year with a lot of stuff to work on,” Levesque said.

He said his biggest priorities are providing universal and affordable access to broadband for everyone in Newcastle and making town government more transparent.

He said he thinks all committee meetings should be recorded and available online and through Lincoln County Television.

“I really think the town has to be more transparent in what it does,” Levesque said.

He said about three or four of the people who encouraged him to run for selectman said they have an “us against them” feeling from town government that makes them feel disconnected from the town’s decision-making processes.

“I think that’s too bad, because something has broken down in the system,” Levesque said.

Levesque said he will make it a priority to ask the right questions in order to fully understand each issue and hold people accountable.

“I’m trained to be skeptical,” he said.

Levesque’s hobbies include woodcarving in his home shop, making wooden bowls and cups with a lathe, and traveling for American Bar Association events.