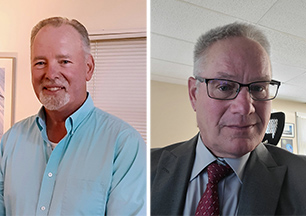 Clinton Collamore is a fourth-generation lobsterman, and he’s been a familiar face in the Bremen and Waldoboro communities for his entire life.

Before he heard that Evangelos would not be running for another term, Collamore, a registered Democrat, didn’t plan on running for the seat. However, he became concerned by the increasingly restrictive federal regulations related to Atlantic Right Whales on the lobster industry in Maine, and he believes that he can leverage his experience as a public servant and a lobsterman to impact change in the legislature.

“The whole industry has been jumping through hoops ever since I can remember,” he said.

Collamore started lobstering with his grandfather and father, Gilbert Collamore, when he was 6 years old in 1966, and he still fishes out of the same port in Bremen today with his son and grandson.

“I’m still hooked to my father’s mooring,” he said.

Collamore grew up in Bremen before moving to Waldoboro around 1978. He graduated from Medomak Valley High School and, later in life, he obtained bachelor’s degree in public administration from the University of Maine at Augusta in 2009.

Collamore learned a lot about devotion to one’s community from his father. Gilbert Collamore served as one of Bremen’s selectmen when Clinton Collamore was growing up, but in the 1960s being a selectman also meant that he was a part-time road commissioner, harbormaster, and anything else the town needed.

“I remember working with him out of a pick-up, patching holes in roads … when I was a teenager,” he said.

Collamore himself served as a Waldoboro selectman for over 18 years, with an interruption here and there to care for his family and earn a degree. During that time, he helped oversee the creation of new ball fields, the town office expansion, and a new public works garage. He has also served on town committees, such as the Sylvania Task Force and the shellfish committee.

Living in the Medomak Valley region for his entire life, Collamore is familiar with the financial struggles of elderly neighbors and young families, and one of his goals is to make life more sustainable for those in House District 45.

“We need a voice for our neighbors (who are) struggling to pay their property taxes, their heating bills, and … prescriptions,” he said.

Asked what he would like to accomplish, should he be elected to a position in Maine’s Legislature, Collamore recalled a memory from his youth on the salty shores at Broad Cove Marine. When fishermen would paint the hulls of their boats, every other fisherman at the shore would come together to lift each boat so they could paint both sides.

Collamore has been disappointed with the ways in which politics prevent representatives from working together, and he would like to be part of the solution and nurture a relationship of trust and respect between members of different parties.

“Everything’s about the parties, and it shouldn’t be. It should be about the people,” he said.

He pointed to his experience as a leader with the machinists’ union at Bath Iron Works as evidence of his experience bringing disparate parties together towards a collective goal.

Collamore began working at Bath Iron Works as a machinist around the age of 21, and he remembers telling a human relations representative on his first day that he would not be staying there for long.

“I said, ‘I’ll tell you something,’ I said, ‘As soon as the price of clams and lobsters gets up, I’m out of here, I’m leaving this place’,” he said.

Collamore eventually made good on his promise, but it was 20 years, two kids, and one mortgage later. During that period, Collamore worked his way up through leadership positions in the Machinist Union until he eventually was elected as the union’s president.

He was also a member of the Waldoboro Shellfish Commission, Waldoboro Masonic Lodge, Rockland Elks Lodge, Maine Lobstermen’s Association, and a life-long member of the Sportsman Alliance of Maine.

Collamore and his wife Rhonda have two children and five grandchildren, including the fifth and sixth generations of lobstermen launching from Bremen.

Collamore, who continues to fish to this day, guided his son through the commercial lobster fishing apprenticeship program and he continues to work on his father’s boat as he waits for the opportunity to get his license.

In what free time he has, Collamore enjoys hunting, fishing, and spending time with his grandchildren.

Lynn Madison, a lawyer with a private practice in Rockland, is running for House District 45 on a conservative platform with the goal of lowering taxes and calling for more fiscal responsibility and accountability for representatives.

Madison sees the state income tax as unnecessary, opposes government regulations, and believes that the Legislature has been possessed by “runaway spending.”

“I think I might be able to do some good in the House of Representatives,” he said. “I’m a pretty standard conservative, I think.”

Madison said he is a supporter of former Gov. Paul LePage and would like to help build a conservative majority in the House to expedite LePage’s impact, should he win the gubernatorial election.

If elected to the legislature, Madison would like to work with the Commission on Indigent Legal Services and he would like to be involved with reviewing any bills and initiatives having to do with the outdoors and/or gun rights.

“Anything having to do with the outdoors I think I bring, not a unique perspective, but one that pays attention to the legal aspects,” he said.

From March 2019 until mid-2021, Madison was an assistant district attorney for the Prosecutorial District 6 which consists of Lincoln, Knox, Waldo, and Sagadahoc counties.

However, Madison did not start his career in law. He earned a bachelor’s degree in computer science with a minor in technical communications from Florida Institute of Technology and later earned a master’s degree in contract and acquisition management in 1992.

He spent eight years at the Kennedy Space Center as an engineer and later in budgeting, working on 42 shuttle missions.

Madison moved to Maine in 1998 from southern Florida because he wanted to study law, and he understood that the University of Maine School of Law had a strong admiralty law program, a subject he was deeply interested in. However, he was also drawn to the Midcoast region because his father offered him a wooden sailboat.

Madison’s father was a pilot for Delta Airlines in the mid-1970s. When Delta started making stops at Maine airports, he would use his per diem rental car to travel around the state, and he fell in love with the Maine coast. He’s had a home in Maine ever since, and Madison grew up sailing boats in the area.

More than an enthusiast, Madison has participated in 1,000-mile trans-Atlantic sailboat races, once when he was 15 and again when he was 21. When his father offered to let him have his wooden sailboat if he moved to Maine, he knew it was an offer he couldn’t refuse.

Despite this, seemingly, arbitrary selection process, Madison said that he never wants to leave Waldoboro.

“For me, it’s a tiny piece of Maine that represents … near the whole state, and I have such great access to everything I love to do. So the two intersecting lines intersected at the right spot for me,” he said.

When he arrived in Maine, Madison worked for Skowhegan Savings Bank as a branch manager through 2001 and then was the president and chief financial officer of Maine State Mortgage Co. until 2009.

He attended University of Maine School of Law and earned his law degree in 2012. He was admitted to the Maine Bar in 2014 and joined a law firm in Damariscotta before joining the district attorney’s office.

Madison has two children, a son who attended Maine Maritime Academy and a daughter who has earned her pre-medical degree.

Aside from sailing, Madison has been a hunter and a fisherman his whole life. He is a member of the board of directors with the Sportsmen’s Alliance of Maine, a member of Gun Owners of Maine, and the president of the Lincoln County Rifle Club in Damariscotta.

“Unless I am sailing, I’m hunting or fishing,” he said.