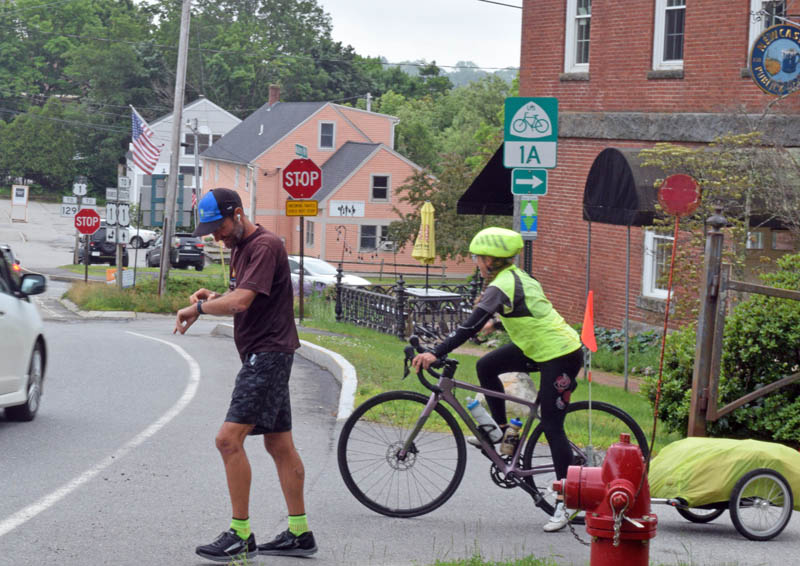 Shan Riggs passed through Lincoln County on his quest to become the first person to run the entire East Coast Greenway from Key West, Fla. to Calais.

The East Coast Greenway is a developing multi-use pathway that connects 15 states and 450 municipalities.

“It’s a totally human-powered trip,” Riggs said during an interview on Monday, June 27.

At the finish line in Calais on Saturday, July 2, near the Canadian border, Riggs got down on one knee and proposed to Grant in an emotional conclusion. She said yes.

Riggs credited Grant with coming up with the idea originally, since no one has ever ran the entire East Coast Greenway, and supporting him the entire way.

The East Coast Greenway is well-marked in Lincoln County with small signs showing the logo of a white tree with a mirror image of a green tree.

About 1,000 miles of the trail consists of protected trails, but the remainder is on roads, Riggs said. Part of the goal of the run was to increase awareness of the trail and to raise money for the East Coast Greenway Alliance, which maintains the pathway. 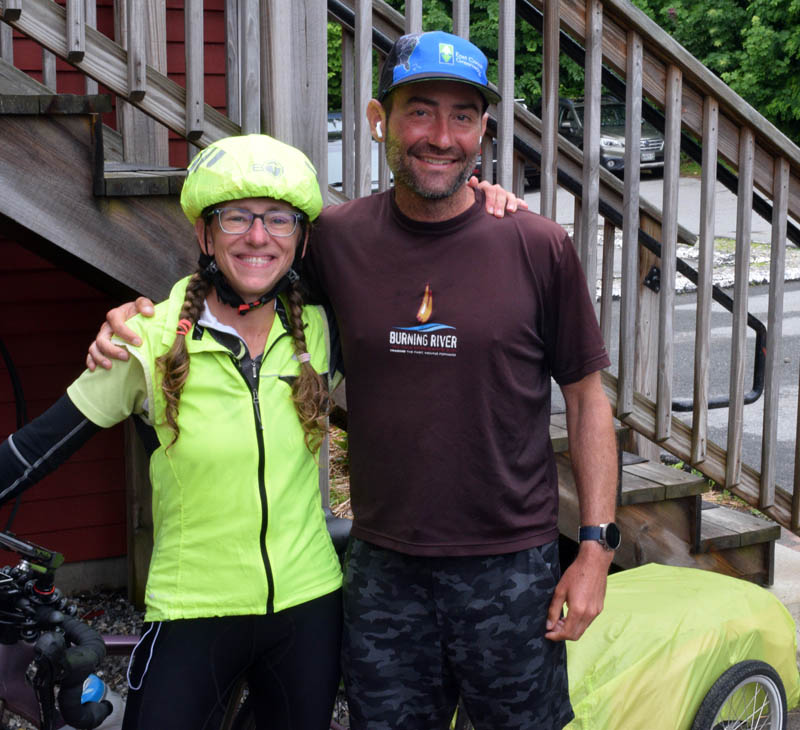 “They have this whole trail system that goes all the way from Key West to Canada and a lot of people don’t even know it’s in their backyards,” Riggs said. “There’s still a lot of work to be done.”

Riggs originally got into ultra running, or running extremely long distances, in 2005 after reading “Ultramarathon Man: Confessions of an All-Night Runner” by Dean Karnazes.

Riggs, of Southbury, Conn., has done long distance runs across the country for various causes, including running over 3,200 miles from San Francisco to Connecticut in 2020. For the 2020 run, Riggs raised money for Foodshare, a part of the Feeding America network based in Connecticut.

For his most recent ultra run, Riggs raised $16,330 for the East Coast Greenway Alliance. Throughout the journey, Riggs documented the trip on social media nearly every day for his 7,000 or so followers.

Grant and Riggs would plan the route each day, making sure to find places along the way to eat and sleep.

People followed the trip online and would sporadically join up with Riggs for the run sometimes. Some people also offered their homes and for the final leg of the trip to Calais, Riggs and Grant had an RV as a support vehicle from a friendly local.

“There’s been so much community support and tons of people coming out,” Riggs said. 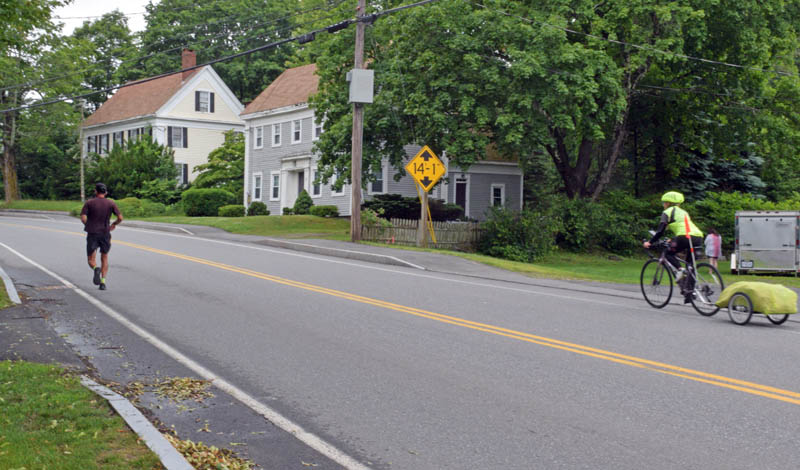 On Monday, June 27, day 73 of the run, the couple started in Brunswick at around 5:30 a.m. and traveled 36 miles to the Newcastle Publick House for lunch.

The East Coast Greenway runs along Federal Street and Alna Road in Wiscasset, before turning onto Sheepscot Road into Newcastle and then meeting Route 1.

“Around here, the roads are pretty nice because they’re not very busy,” Riggs said.

After lunch, another 11 miles was covered. Riggs ran up Academy Hill Road, through Damariscotta Mills in Nobleboro, and around the Great Salt Bay. He then passed through Nobleboro on Morgan Hill Road and Center Street, before meeting up with Route 1 again to run into Waldoboro, ending at Moody’s Motel.

During the Lincoln County leg of the trip, Jeremy Chapman, of Hebron, joined up with Riggs and Grant in Wiscasset to relive his own journey on the East Coast Greenway. 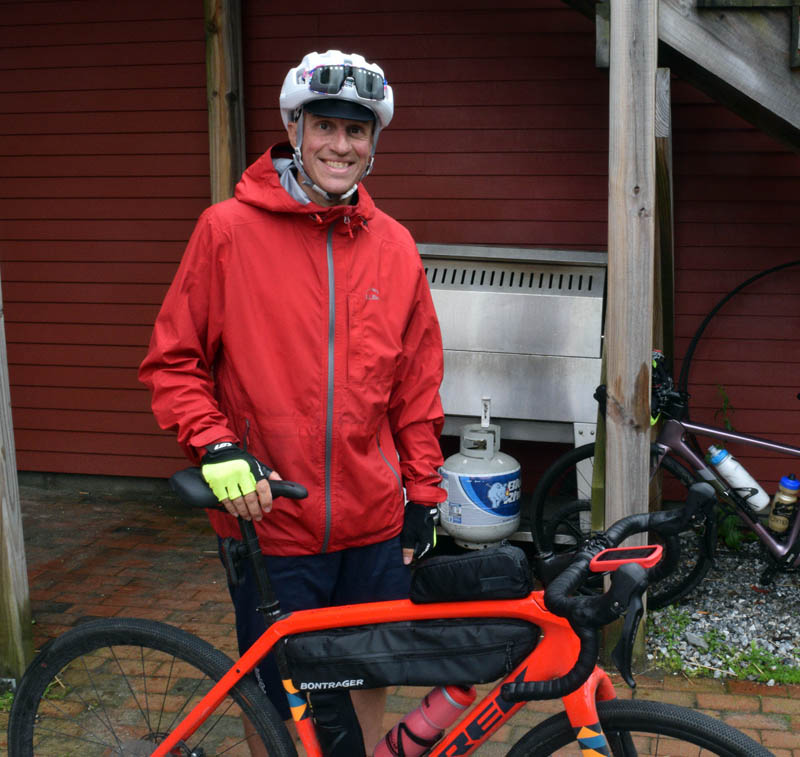 Jeremy Chapman, of Hebron, poses with his bicycle outside the Newcastle Publick House on Monday, June 27. Chapman met up with ultra runner Shan Riggs for a leg of Riggs’ journey to become the first person to run the entire 2,960-mile East Coast Greenway. (Evan Houk photo)

Chapman joined for lunch at the Newcastle Publick House, saying that he is one of 100 or so people to bike the East Coast Greenway.

“I saw the good side in people,” Chapman said of his trip.

Riggs is running the Greenway at the same pace most people bike it, but he said Chapman biked it “twice as fast.”

One benefit of ultra running is “to see what you’re made of, to understand yourself,” Riggs said.

He also said he enjoys seeing the country on foot.

“You get a feel for the distance of the whole country when you do it at foot speed. It’s a special way to travel, it’s painful,” Riggs said with a laugh.

“That’s one of the unique things about it, we wake up in a different spot every day,” he said.