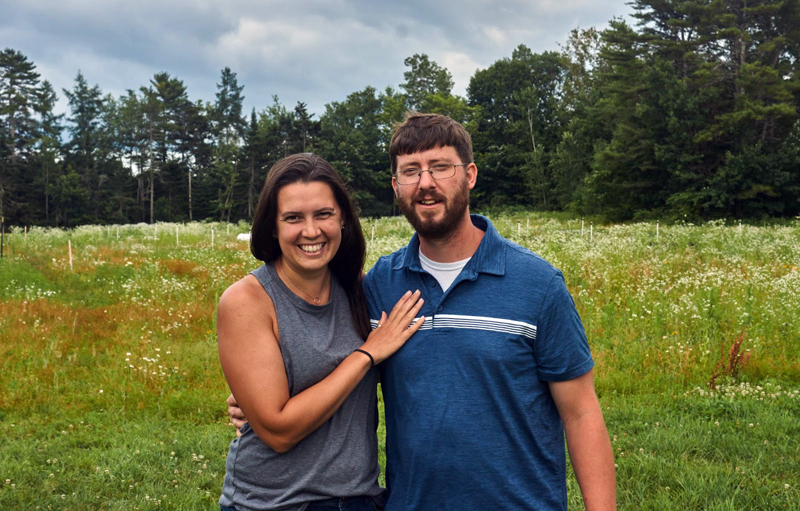 Kailey Smith and Sterling Doiron stand in front of Uprooted Farm in Waldoboro. The couple began the farm in Farmington before relocating it to Waldoboro in December 2021. (Aiden Jacobs photo)

Sterling Doiron and Kailey Smith started Uprooted Farm, which was originally based in Farmington. They relocated the farm to its current location in Waldoboro in December 2021.

The namesake of the farm was inspired by the many times Doiron has been uprooted in his own life, both during his six years in the Air Force as well as the relocation from Farmington to Waldoboro. He hopes that through Uprooted Farm, he may be able to put down roots in the Waldoboro community.

“When I was growing up there was always a garden,” Doiron said. “I went to school for sustainable agriculture and I wanted to use what I learned at school and I thought, ‘why not start this business?’”

Uprooted Farm has just under an acre of land in production, all of which is farmed using organic and sustainable practices.

“I try to do a lot in a small space … to utilize the space as efficiently and sustainably as I can,” said Doiron.

Though Uprooted started during the COVID-19 pandemic, Doiron and Smith found their farm relatively unaffected by the effects of the global pandemic, as farming seemed “like a reprieve from everything else,” said Smith.

Both Smith and Doiron felt grateful that much of the infrastructure that small farms were using to cope with the effects of the pandemic were already in place when they started Uprooted in 2021.

“It was easier for us to move here in December of last year than it would have been had we moved a couple of years earlier,” said Doiron. 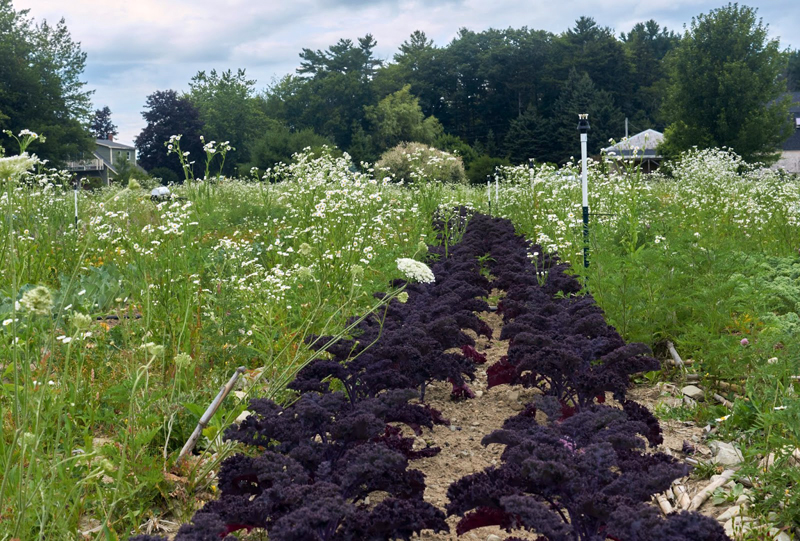 Uprooted Farm does offer a Community Supported Agriculture program, which can be purchased through the farm’s website. Members can expect a box of eight to 10 different seasonal vegetables for 16-20 weeks.

“In my planning I have to figure out what veggies to grow, and I’ll have to have at least eight to ten veggies to have that variety,” said Doiron.

In addition to offering CSA memberships, Uprooted Farm also contributes to the Maine Senior Farmshare Program, in which seniors that meet certain requirements get $50 worth of fresh, locally grown produce over an eight week period.

Uprooted Farm has also partnered with FarmDrop, a service that allows farmers to sell their products online and deliver them to local buyers.

“We’re going to be a pickup site for the Union-Midcoast FarmDrop … to try and expand the FarmDrop in this area,” said Smith.

Though Uprooted Farm is relatively new to Waldoboro, Doiron and Smith have been met with a warm welcome from the local community. Over the last few months, a few CSA members helped the fledgling farm gain a foothold in the community by doing research, marketing, and social media outreach.

Doiron hopes to step away from his full-time job to focus all of his attention on Uprooted and inspire more collaboration with like-minded farmers. He also hopes to expand Uprooted Farm’s stand, which is open from noon to 3 p.m. on Sundays at the farm, into a more permanent structure.

Uprooted Farm also hopes to partner with the University of Maine’s agriculture and horticulture program in the coming years to allow a student from UMaine to intern at Uprooted Farm and help with farm work as well as learn about farm systems.

“For me, I like being able to grow and take from the land, and then also give back and ensure that there’s healthy soil available for future generations,” said Doiron.

Uprooted Farm can be found at the Long Cove Farmers Market and Union-Midcoast FarmDrop.