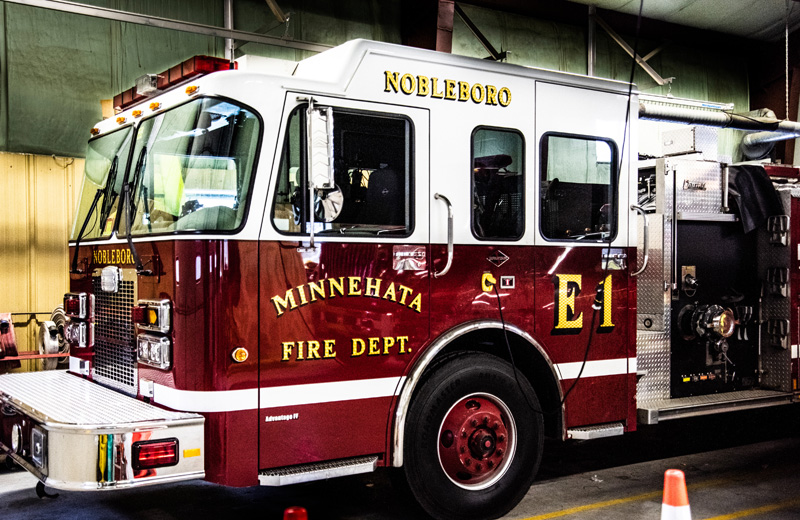 The vaccine mandate which becomes effective Oct. 29 requires all members of health care facilities, including emergency services providers, to be immunized against COVID-19 or face losing their license to operate. The mandate does not draw a distinction between EMTs and firefighters, and in many cases first responders pull double duty.

Of Edgecomb’s 19 firefighters, five are also trained as EMTs; four of Jefferson’s 24 active firefighters are EMTs and they have two additional members that function solely as EMTS. Nobleboro has four licensed EMTs as part of its 13-member department, although Chief Richard Genthner said he would like to see all 13 be licensed EMTs.

Genthner said he needs at least three more licensed EMTs and could always use more firefighters. “Ideally I’d like to see us be a department of 20 to 25.”

Jefferson’s Walter “Wally” Morris said he has three people on the roster that don’t have the vaccine.

“I hate to lose them,” he said. “I really can’t afford to lose anybody.”

According to Morris, the three holdouts are reconsidering based on his request. “Each one said they would talk to their doctor. They’re thinking about it.”

The combined departments don’t generally have paramedics, or even advanced EMTs on their rosters, and are not licensed to provide transport to hospitals. The life-saving services they can provide are limited: Performing CPR and defibrillation, administering oxygen and a limited number of critical medications such as EpiPens for allergic reactions or Narcan for overdoses.

But they are often the ones that keep patients alive until an ambulance service arrives. Communities depend on their quick response.

While EMS responses can make up 50% or more of each fire and rescue department’s annual calls, the loss of staff affects their ability to fight fires, too.

It’s not uncommon for five or six fire departments to be paged out for structure fires, or for three departments to respond to motor vehicle crashes. Mutual aid is a key aspect of every Lincoln County town’s plan for fire emergencies.

But fielding an emergency response from volunteer departments is already difficult; the loss of even one member has impact.

“Sometimes it’s hard to get anybody, other times there may be a good turnout, it’s the nature of the beast,” Potter said. “The page goes off, we wait and see who’s going to show up.”

Genthner said Nobleboro will lose one “really good interior structure firefighter” to the mandate. “Those are kind of hard to replace.”

According to Genthner, firefighters require a minimum of 76 hours of  initial training to be certified by the Bureau of Labor. That initial training doesn’t include extrication, search and rescue, or interior structures.

“We have 1,000 hours of training tied up in this individual,” he said.

Potter said he is losing one of his officers. “That’s huge. To lose an experienced officer.” But he can’t let him stay on unvaccinated after Oct. 29.

Morris said one of the three firefighters he is losing has over 20 years of service to the community. “As desperate as we are for folks. I have to tell him we can’t use you anymore.”

Morris said it’s “very unfair that state officials have put fire chiefs in that position. The state doesn’t offer solutions when problems affect us on a local level. Where will they be when we have a fire and there’s nobody left to respond?”

There are other reasons departments have lost staff recently. Compensation is a factor. Jefferson is an all-volunteer department. Nobleboro and Edgecomb are pay per call with an hourly rate of $13.75 or $15, respectively. Both departments have a two-hour minimum.

“They’re paid 24 bucks to get out of bed,” Genthner said.

Morris spoke to the reasons that Jefferson firefighters choose to serve, despite the fact that they remain the only fully volunteer department in the county.

He cited the desire to help people and to be part of the community. He said that family tradition plays a role, as well; there are strong family ties within the department going back generations, with sons and daughters of members getting “the bug” and joining.

All these departments also face the same reasons other industries face: Relocation, personnel conflicts, no time for family, career changes. But the job they do is critical. Therefore each loss is critical.

“The mandate is making a bad situation even worse,” Potter said.

“Every person we lose directly impacts our ability to serve our community,” Morris said.

Every department is looking for solutions. And one solution is to dissolve the EMS branch of the departments.

“We’ve discussed not having a first responder program here,” Potter said. “But the need is so great with half the calls being for EMS. It proves that it’s a service that’s needed in town. It’s going to get ugly before it gets any better, I’m afraid.”

Genthner said, “For us, we would have to bring on at least five to six full-time EMTs, purchase an ambulance and all the necessary equipment.”

He thinks they could make it work with basic EMTs buttressed by mutual aid from local ambulance services for advanced life support calls. But it’s not a cheap venture.

Genthner said he expects that in the next 5 to 10 years small towns will begin to form separate EMS departments, using grant money to purchase and outfit ambulances and to pay for staff until the town can pick up the cost.

Morris said the town’s selectmen asked him about starting a separate EMS department.

“It’s going to be a lot of money,” he said. “We don’t even have a stretcher and our vehicle is 20 years old. Where will we find people?”

He noted that services are already struggling with the limited pool of qualified applicants.

“It really boils down to the ability to be effective,” Genthner said. “If we’re not able to deliver on the mission, we need to reevaluate if we keep that mission going.”

Morris said there are other options.

LincolnHealth may play a role, perhaps as a central hub for paramedic services that can respond when needed to augment local EMS departments. And towns can negotiate with other ambulance services such as the Delta Ambulance Service out of Augusta, or the Union Ambulance Service, although rates are rising everywhere and response time may not be as quick.

But what it all comes down to, according to Genthner, is that “first responders change the outcome of that initial call when their towns don’t have a dedicated ambulance service.”

Bristol is the largest combined department in the county with double the budget of many of the other towns and double the calls: 140 calls for fire last year, and 260 calls for EMS, according to Chief Scott Sutter.

The department has 26 members with 14 of them trained as EMTs, and all of them vaccinated. They’ve even gained two new members recently.

Still, even Sutter said he can use more people, particularly firefighters. And he said he would favor a move toward some sort of regionalization, possibly cost sharing ambulances and equipment.