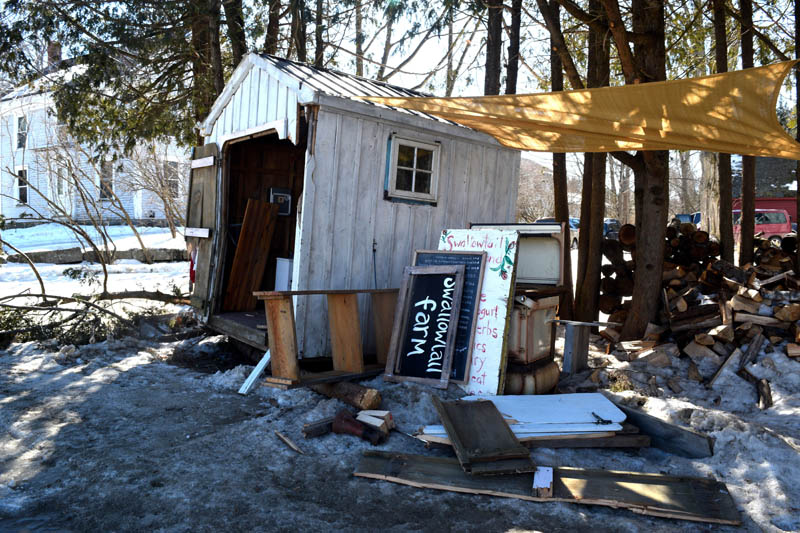 The remains of the farm stand at Swallowtail Farm and Creamery in Coopers Mills after vandalism late Wednesday, Feb. 24. (Hailey Bryant photo)

The owners of a farm in the Whitefield village of Coopers Mills say someone used a tractor to destroy their farm stand late Wednesday, Feb. 24. Now, the community is eager to help them rebuild.

Lauren and Sean Pignatello own Swallowtail Farm and Creamery,  at 98 Main St. The Pignatellos awoke around midnight Feb. 24 to a crashing sound outside their home.

They saw someone in a yellow tractor with a bucket destroying the small farm stand next to the road, which the Pignatellos have operated on the honor system for 12 years.

The Lincoln County Sheriff’s Office is investigating. Deputies responded to the farm and left around 1:30 a.m., Thursday, Feb. 25, according to Lt. Brendan Kane.

Lauren Pignatello said she does not know who would have destroyed the stand.

“I’m exhausted and so sad that someone living so close to us could do something so terrible,” she said in a Feb. 25 post to Swallowtail Farm and Creamery’s Facebook page.

Though the stand is less full in the winter, the vandalism destroyed some farm products and decorative items.

Amid the sadness and shock of losing the stand, though, the family has received strong support from the community.

“It’s not going to deter me,” Lauren Pignatello said. “It’s very sad, and it’s certainly been a hard couple days that leave us feeling vulnerable, but I just can’t even express how held and supported we feel.”

Friends and neighbors have stopped by the farm to drop off food, money, lumber, and grain for the farm’s animals. One woman, Beth Bejcek, of Kennebunkport, heard about the incident and started a GoFundMe campaign for the family.

The family’s insurance does not cover the farm stand, Lauren Pignatello said.

“I love being part of a community and giving back, and now the community wants to give back to me, which is really wonderful and heartfelt. We’re blown away and overwhelmed with emotion,” Lauren Pignatello said.

In the fall, the Pignatellos started a “farm to trunk” program, involving her sons delivering food from Swallowtail Farm and other local farmers directly to people’s homes, from Belfast to Scarborough. They wanted to help people get fresh food and help farmers who lost their primary sources of income during the pandemic, when farmers markets and restaurants closed.

Lauren Pignatello is a founder of the Portland and Brunswick winter farmers markets, which give farmers a place to sell their food during the offseason.

“I want to live by example and make a difference,” she said.

Inspired by the community response, the Pignatellos hope to rebuild the farm stand to be better than before.