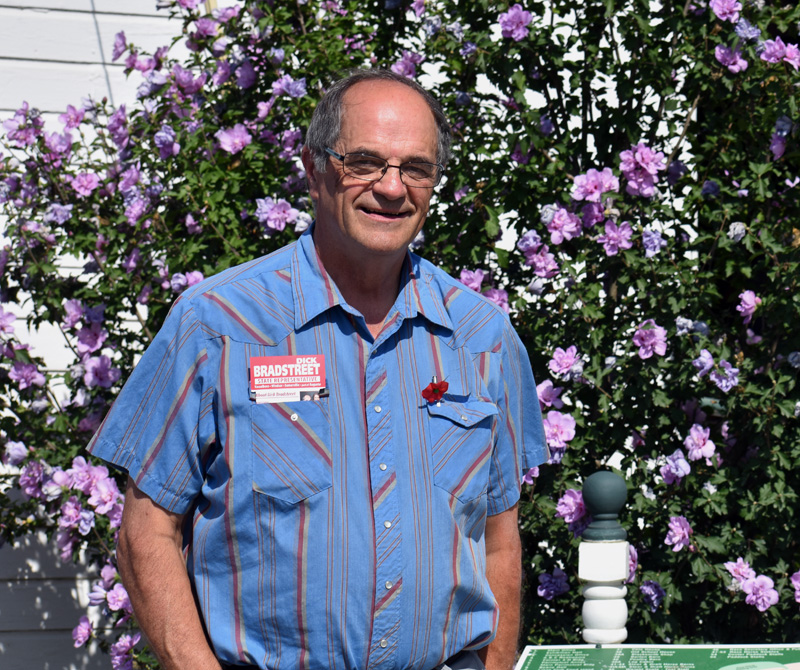 Bradstreet is the part-time executive director of the Manufactured Housing Association of Maine. He sits on the Legislature’s Judiciary Committee.

Bradstreet spent most of his career in the housing industry. He is the former president of Bradstreet Homes Inc., a Winslow-based dealer of modular homes, which he ran for 30 years. He sits on the state Manufactured Housing Board.

Bradstreet chairs the board of the Winslow Community Credit Union and attends Faith Evangelical Free Church in Waterville.

Bradstreet and his wife of 46 years, JoAnne, have three children and seven grandchildren.

Bradstreet’s daughter, Amy Arata, R-New Gloucester, could join her father in the House if both win their races. She is running in House District 65.

Originally from Albion, Bradstreet graduated from Lawrence High School in Fairfield in 1969 and from Dartmouth College in Hanover, N.H., with a degree in sociology, in 1973.

He previously held elective office as a member of the school boards in Albion and Fairfield. He was a member of Albion’s comprehensive plan committee.

Bradstreet described his first term in the Legislature as educational, at times frustrating, but also rewarding.

One issue Bradstreet wants to work on is the citizen’s initiative process.

“I think the current referendum situation proves that, although it is an available option, some things need to be fixed,” he said.

He gave the 2016 votes to legalize marijuana and adopt ranked-choice voting as examples.

“The vote to legalize marijuana left a lot of enforcement issues and ranked-choice voting had unconstitutional issues,” Bradstreet said.

Bradstreet said he is interested in giving rural voters more of a voice in the referendum process.

“The people I have talked to are upset with the referendum process. They feel like they are being forced into statewide policies they don’t agree with and many don’t understand the adverse impact of,” Bradstreet said.

Bradstreet said the current process could be amended.

“I think we need to take a look at a different way we produce these questions and proposals. I think our system could be improved in a way that saves us time and money,” Bradstreet said.

Bradstreet said he approves of the gubernatorial administration’s handling of the state budget, as Maine has a $176 million surplus and a $273 million rainy day fund.

As a member of the Judiciary Committee, Bradstreet said he has appreciated the governor’s efforts to bring qualified judges to the bench.

“We have some really good judges in this state,” Bradstreet said.

The state’s economy will benefit from a continued emphasis on vocational education, but also a concentrated effort to support traditional forms of higher education, according to Bradstreet.

“There has been a lot of emphasis on technical education, which is great, but we still need to focus on higher education. One day these students will be our leaders and leaders in other areas,” Bradstreet said.

The ongoing opioid crisis is another important issue facing Maine, Bradstreet said. He said families have been impacted by the crisis that never of dreamed of dealing with anything like it.

Faith-based organizations, though not for everyone, are another option that could benefit people, according to Bradstreet.

Bradstreet said he is willing to work across the aisle to get things done, referencing the recent state budget. “The budget was a little big, but at least it was reasonable. I’m willing to work with other people,” he said.

Of recent and ongoing increases to the state’s minimum wage, Bradstreet said it is important to understand the impact they have on small businesses and the razor-thin margins some small businesses operate on.

“Small businesses have been telling us how much of a burden it is to keep up with these increases. I don’t think the people on the other side understand how difficult it is and the very fine margin between making it and not making it,” he said.

According to Bradstreet, with the economy performing well, small businesses can handle the increase in wages, but the inevitable economic downturn may bring a different result.

“The way to do it is to have a robust economy like we have had lately,” he said.

Bradstreet opposes Question 1 on this year’s ballot, regarding the implementation of a tax on higher incomes to fund in-home health care services for elderly and disabled Mainers.

Bradstreet said he is concerned about the question’s impact on health care services, saying it could amount to forced unionization of health care workers, with every such worker considered a state employee.

He said the question would have benefited from going through a public hearing prior to being placed on the ballot.

“A public hearing wasn’t allowed to happen and that wasn’t right,” he said.

In addition to Somerville, House District 80 includes Vassalboro, Windsor, part of Augusta, and the unorganized territory of Hibberts Gore.