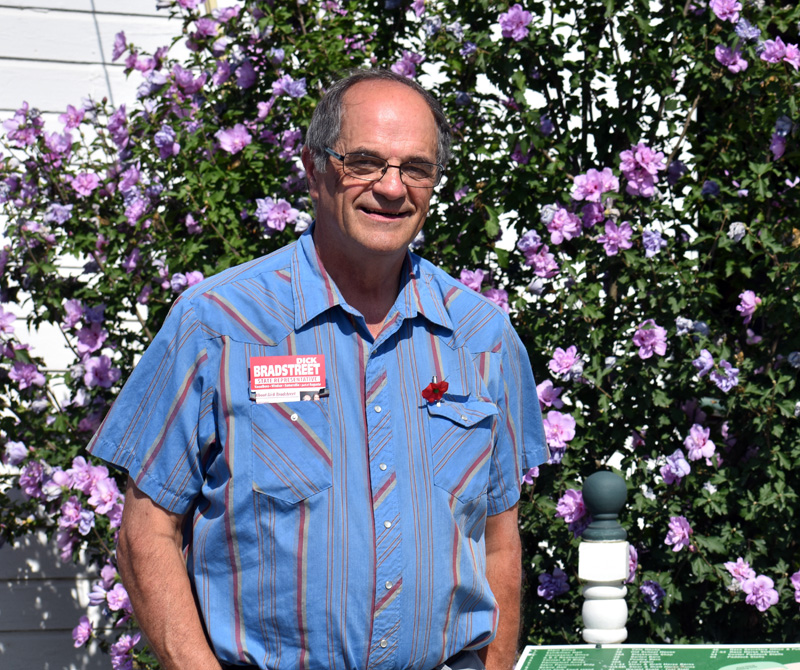 Bradstreet is the part-time executive director of the Manufactured Housing Association of Maine. He is the ranking member of the Legislature’s Labor and Housing Committee.

He spent most of his career in the housing industry. He is the former president of Bradstreet Homes Inc., a Winslow-based dealer of modular homes, which he ran for 30 years with his wife.

Bradstreet has lived in Vassalboro for 18 years. He and his wife of 48 years, JoAnne, have three children and seven grandchildren.

Bradstreet’s daughter, state Rep. Amy Arata, R-New Gloucester, serves with her father in the House, where she represents District 65.

“We sit next to each other when we are up there. It is pretty neat,” Bradstreet said. He believes they may be the first father-daughter pair to serve in the Legislature at the same time.

Originally from Albion, Bradstreet graduated from Lawrence High School in Fairfield in 1969 and from Dartmouth College in New Hampshire with a degree in sociology in 1973.

He previously held elective office as a member of the school boards in Albion and Fairfield. He was a member of Albion’s comprehensive plan committee.

He was elected to Vassalboro’s budget committee at annual town meeting this year.

Regarding his work in the Legislature this term, Bradstreet is proud of the passage of L.D. 1209, “An Act To Require Legislative Hearings on Citizen-initiated Legislation.”

Bradstreet said the idea is to give voters a better understanding of what they are voting on in citizen-initiated referendums.

“It’s not trying to keep it from going on the ballot; it is just a chance to hear the pros and cons and to have voices heard,” Bradstreet said.

Bradstreet said the only exception to the need for a public hearing on a referendum vote is if two-thirds of both the House and the Senate vote to send a citizen-initiated referendum straight to the ballot.

“When it got signed into law, the governor said she wondered why we hadn’t had something like this before,” Bradstreet said.

Bradstreet sponsored a bill last session to have each of the state’s two congressional districts vote on whether they want to continue with ranked-choice voting, though the legislation did not pass.

“Looking at ranked-choice voting, it sounds good on the surface, but if you dig into it more, it is not as good. I believe in the principle of one person, one vote,” Bradstreet said.

Bradstreet also sponsored a bill to institute a sub-minimum training wage for workers under 18, but it did not pass.

Bradstreet said his goal was to encourage employers to hire more employees under 18, as they would earn less than the state’s $12-per-hour minimum wage.

Regarding issues facing his district and the state, Bradstreet pointed to Maine’s revenue shortage.

A state forecasting panel reported July 29 that the coronavirus is driving a projected revenue shortfall of $1.4 billion over the next three years, with more than a $500 million hit by mid-2021, according to the Bangor Daily News.

“I think we need to come together and work on that. I served on the labor committee and I saw a lot of bills that cost a lot of money. We didn’t protect the state’s rainy-day fund. We have to prioritize budgets differently, step back and reassess our priorities,” Bradstreet said.

Bradstreet sees the return of students to school as another important issue facing House District 80.

“What are we going to do to get kids back to school? I know the (Maine Department of Education) is working on it, but I hope they are listening to the school districts, the people who are there every day. I would prefer to see it organized at the local level as opposed to the state level, using the state as a resource but making sure it is applicable to the local situation,” Bradstreet said.

Bradstreet wants to ensure the state’s revenue shortfall does not drive up the local share of education costs.

“Given the revenue shortfall, we need to be careful with property taxes related to education costs and revenue-sharing is an important part of that,” Bradstreet said.

Bradstreet supports revising the governor’s emergency powers, specifically how long a governor can use such authority.

Mills declared a civil state of emergency in March and has extended it five times, most recently through Sept. 3.

“I’m in favor of a proposal to require legislative approval over a certain time frame,” Bradstreet said, adding, “Regardless of what is decided, we should have some input. The emergency powers should be reviewed every 30 days. Right now there is no deadline or end in sight.”

In addition to Somerville, House District 80 includes part of Augusta, Vassalboro, Windsor, and the unorganized territory of Hibberts Gore.

Bradstreet defeated two-term state Rep. Lori Fowle, D-Vassalboro, to win the seat in 2016. In 2018, he staved off a challenge from Steve Ball, D-Windsor, a retired U.S. Army officer and teacher.

Bradstreet’s 2020 challenger, Hallee, did not respond to multiple requests for an interview.